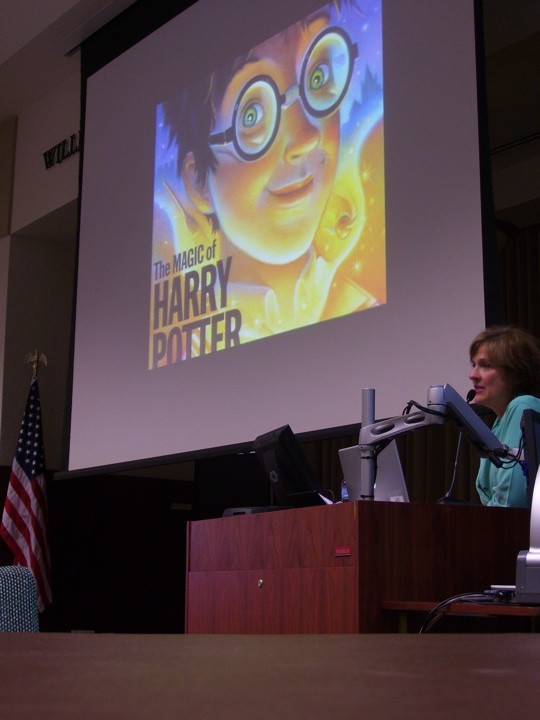 Grand Pré showcasing her image of “the Magic of Harry Potter.”

Before the magic of Harry Potter held captive an enchanted world-wide audience — before the first book even left the printing room — there was a table, a chair and an artist. Would the Boy-Who-Will-Be-Forever-Known have captured its American readers without the iconically stylized art of  illustrator Mary GrandPré?

Recently, GrandPré was one of two keynote speakers as the Sarasota-Manatee campus of the University of South Florida (USF) held its fifth annual Children’s Literary Symposium (CLS) on Feb. 5. Her keynote address, entitled “The Power of Creative Thinking,” was primarily an argument on the importance of imagination and creativity have in developing minds of children and how picture books are the perfect illustration (pun intended) of how to engage and educate young minds.

Born and educated in Minnesota, GrandPré began her illustrious career at five and “hasn’t stopped since.” She explained in her keynote how her father drew illustrations with her and had a “great storytelling imagination. He instilled in me a desire to be a storyteller.”

When considering her art, both within books and through other mediums, she described it as a “highly personalized and lyrical interpretation of the subject. I create from what I know.” Much of her early work was inspired by her childhood spent in Catholic school. “The nuns were very strict and the environment very harsh for a child of six.” She felt that the school was especially rough on the imagination of a children, due to the austere rules as well as the constant field trips to a graveyard for local funerals. GrandPré explained that she only survived because of the large, beautiful and intricate stain glass windows placed all around the Church — they were among her first experiences with visual storytelling.

Although she willingly admitted that illustrating Harry Potter was “the turning point in her popularity,” she argues that working on her first children’s picture book, Chin Yu Min and the Ginger Cat by Jennifer Armstrong, was “the turning point in her career.” She loved how the main character showed vulnerability and had a chance to grow as a person throughout the tale.

“Developing a character is a personal thing,” GrandPré said, “and pictures show not only the character and an action, but [they] are meant to open up new conversations for kids.”

GrandPré also worked on conceptual arts for DreamWork’s production of the movie Antz. Her images, painted from the exaggerated perspective of an ant, were used to help the animators with ideas, colors, shadowing and proportional sizes for the film.

Soon after the release of Antz came the release of the world-wide phenomenon of Harry Potter. Originally, GrandPré refused the job because she was very busy with another book when it was pitched to her by Scholastic’s David Saylor. But Saylor persisted and she fell in love after reading the manuscript for Harry Potter and the Philosopher’s Stone, connecting with the human parts of Harry. “[Harry] opened my eyes to how great kids are,” GrandPré gushed. “It was amazing, being a part of a project that got kids kick-started in reading.”

GrandPré acknowledged being very lucky because the books’ author, J.K. Rowling, is a visual writer. In choosing what to depict in her art for the books, she would highlight descriptions of places and characters and try to pick something intriguing for the reader, but at the same time, not give too much away.

“The real magic of discovery lies not in seeking new landscapes, but in having new eyes,” GrandPré said, quoting Marcel Proust, at the conclusion of her keynote. “We underestimate a young child’s view on pictures and images. They help kids appreciate the visual world as well as the written word.”