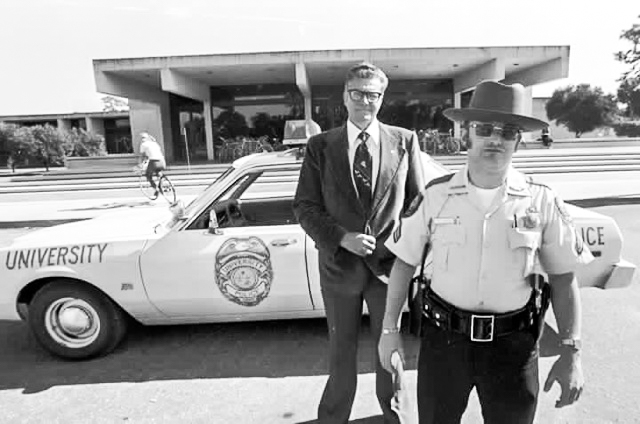 An unidentified University Police officer and another unidentified individual in front of Hamilton Center in the late 1970s or early 1980s. (Image courtesy of Officer Kelley Masten)

It is not hard to find a police officer on campus. Sometimes they patrol around on foot or cruise near the Bayfront in a Campus Police Department (CPD) branded car. Sometimes they sit down in Hamilton “Ham” Center and eat Italian subs from the C-Store. Ryan Welch is one of the 10 police officers on campus. He has been apart of the campus for over three years, but his public service started over a decade ago.

In high school, he had a lot of friends that were enthusiastic about the military.

“I have always known that was the route I wanted to take,” Welch said. “I don’t know exactly why, per se. I guess a sense of public service.”

“I didn’t really do my job that I joined to do,” Welch said. “We did convoy security, there was no [military occupation specialty] for a convoy security team member.”

In 2010, Welch was deployed to Iraq and Kuwait to serve as a Convoy Transport. As part of the convoy, Welch spent much of his time around gun trucks, which were armed with 50 caliber machine guns. He and his team were protectors of other sorts of vehicles, many of them civilians that were working with the United States government. Welch started off as alternating between driver and gunner in the truck, before being made a Truck Commander, which gave him sole responsibility for the truck and the men inside it.

“We were there to make sure that nobody was going to try and attack them on the way,” Welch said.

Welch was deployed again to Qatar in 2013, as a signal support specialist. His job was to manage the military’s network, with his exact title at the time being Information Manager Officer. His secondary job was Force Support Technician, where he would monitor the entry control points of the base and make that the explosive device scanners were operational.

“Qatar was a little different,” Welch said. “There was a lot more leniency as where we could go. Qatar is very much like Dubai, there’s a lot of money there, things like that. It was more like a nine to five.”

In 2014, Welch entered the police academy. He had gotten hired with the Bradenton Police Department, where he worked for a short time, though a service-related back injury rendered him unable to continue in that role. In June 2016, Welch was hired at New College.

Reflecting on his time since 2007, during his service both at home and abroad, Welch shared it is hard to remember any specific days as extraordinary.

“These 11 years has gone by real quick, like a blink of an eye,” Welch said. “From the time I joined until now went by pretty quick.”

Welch remembers the most notable time in his service was just shortly before his son was born in 2013, just before Welch’s deployment to Qatar.

“I only got to see him for three days before I was deployed,” Welch said. “Then I left for nine months. It was good because my wife and I didn’t have to worry about finances, since I was away, making money, and not really spending any.”

Despite the difficulty of leaving his newborn son, Welch is thankful that his son was not older when he had to leave.

“He doesn’t remember it,” Welch said. “I hear stories sometimes from friends of mine, where they’re leaving for the military and their kids are about six years old. They leave, and then they come back and have a hard time readjusting. Because they’re at an age where they can remember this stuff.”

In addition to foreign deployment, the National Guard also has domestic responsibilities. During natural disasters within their states, the National Guard operates under the state government in order to provide humanitarian aid. The Florida National Guard is especially active during hurricanes, given the large threat they can pose to the state.

“We’re typically responsible for maintaining and running shelters,” Welch said. “We would provide food and water, and search and rescue. A lot of our military vehicles are high water vehicles that can get through places other vehicles can’t.”

Welch is currently is an M-day member, which means he drills one weekend a month and two to four weeks a year. If the situation requires it, Welch can be called up and put into active duty.  He is currently a Staff Sergeant second battalion at the one-sixteenth field artillery, based out of Winter Haven.

“ We [law enforcement officers] are members of our community,” Welch said. “We have families, we have lives behind the badge. I think that’s something a lot of people tend to forget: we’re human as well.”