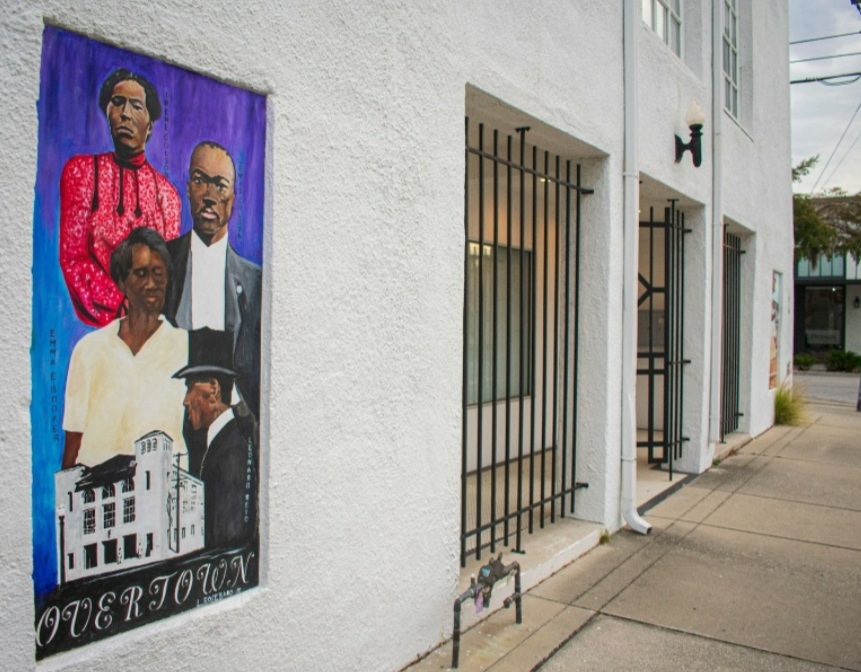 A mural of Lewis and Irene Colson, founding residents of Overtown who built the Bethlehem Baptist Church. The mural is painted on what used to be that very church.

An eye-catching array of stylized murals have begun steadily coating the historic walls and buildings of the Rosemary District near downtown Sarasota. The artworks themselves seek to memorialize and honor the history of black settlers within the area, a history that was paved over and forgotten in the decades-long process of racial segregation that intentionally pushed black families out of the downtown area towards Newtown. The artworks are part of the Gilbert Mural Initiative, a campaign spearheaded by the Rosemary Art and Design District (RADD) in the hope of revitalizing awareness of Sarasota’s black history and spurring further creativity in the community.

“This whole area was known as Overtown, which was the first black community here,” RADD founding member and muralist Walter Gilbert explained on a walk through the area, now dubbed the Rosemary District. “Blacks first came here in the 1880s. This is the part of Sarasota they settled in before the community decided they needed this part of town to expand their neighborhood from downtown. That’s when they plotted Newtown. And slowly but surely, they got all the black people from over here, up to Newtown, and we ended up with this Rosemary District.”

“This street was the heart and soul of the black community,” Gilbert continued. “There’s only one original black family left over here now.”

That first enclave pioneered by the black settlers of Sarasota in Overtown was a burgeoning neighborhood supported by thriving businesses and a strong sense of community. The streets Gilbert referenced once held black-owned markets, merchandise stores, a durable brick church and even a successful movie theater. Residents would persevere through difficulties by pooling their resources into local programs meant to fund medical and social services. The persons who lived there possessed a wide variety of skills that contributed to the development of Sarasota. Yet, without the murals RADD hopes to paint, few who see downtown Sarasota recognize that history.

“This mural here was our first test mural, and it depicts a man named Willie B. Rogers,” Gilbert described. “It was actually taken from a photo we found that was dated in the 1950s. He’s standing in front of the Ace Theater leaning on this old Buick, which really is important because the Ace Theater was the black movie theater here in Sarasota. During segregation, we couldn’t go to movie theaters with white people, we had to have our own. And that’s where the photo was taken.”

Other murals Gilbert pointed out contained similar imagery of Overtown icons, such as Buck O’Neil, the famous baseball player and first black major league coach and Elmer E. Booker, the founder of the first black school.

Yet, Gilbert implied that the central message and goals of RADD have other important elements as well.

“What we’re trying to do is make this a multicultural arts district, and have that place for the community to go to for their arts,” Gilbert said. “We believe the group at the Gilbert Mural Initiative should include all people. That’s the theme of RADD. So we have all types of murals, not just black people. We want to have quality art murals from all across the world. Anybody that wants to contribute, we can find a place. The main ones are going to be historic black people that lived here, but we’re including anybody that is a quality muralist to put murals on the wall.”

Gilbert then went on to share one last mural in the Rosemary District he deeply appreciates.

“Out of all the murals we’ve done so far, that’s my favorite,” Gilbert said, referring to a piece created by street and graffiti artist Elle. “I love that. Want to ask me why? Look at her. She covers every race. Not only in her skin tone, but even in her hair. That is such a uniting powerful piece of art. Most of the murals will be of pioneers. But at the same time, we want art. We want real good art. It doesn’t have to be anybody in particular. I love her.”