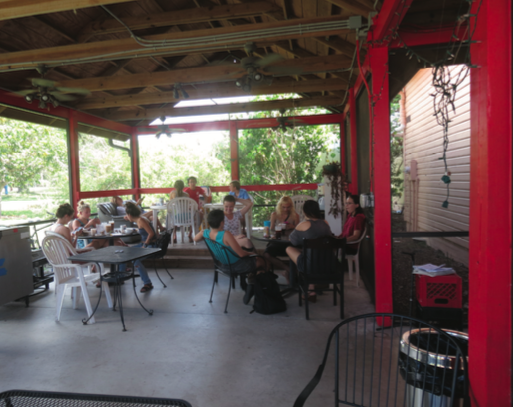 In the past few months, there have been talks regarding the future of New College’s student-operated café, the Four Winds, highlighting several financial and organizational concerns.

“We have a meeting planned for Dawn Shongood, the Four Winds manager Lorraine Cruz, Bill from Metz…and I for after Thanksgiving,” Vice President for Relations and Financial Affairs (VPRFA) Eva Ernst told the Catalyst in an email interview. “We’re waiting until then so that we can review the profit and loss report. For the moment, I think we’re all just privately brainstorming some ideas about how to improve the process so we don’t have to continue bailing them out, but nothing has been decided yet.”

In response to a request for an official statement, New College Student Alliance (NCSA) co-presidents Steven Keshishian and Selena Goods referred to the aforementioned comment by Ernst.

“I have no information on that to give you,” Moore said in an email interview.

In light of circulating rumors, Four Winds manager Lorraine Cruz stated that they and the involved parties would convene to privately and intensively discuss the plan of action to ensure the continued existence of the beloved café. While administrative decisions are still up in the air, Cruz provided several ways in which the student body can help support the Four Winds.

“Community spaces are built by everyone,” Cruz said, “not just by me and not just by the employees back there.”

A simple way to help the café is to do one’s part as a conscientious customer.

“Not leaving your dishes outside, cleaning your plate—these are small things that anyone can ask for because it is a community space,” Cruz commented.

While dining at the Four Winds, students should also try to be considerate to the staff.

“We’re never mad at anyone,” Cruz said. “We don’t want to be mean. I think that people need to understand that we are in an extremely stressful environment on top of the fact that we are in school, that there is a paper due tonight and that there’s this other thing due tomorrow.”

Moreover, the Four Winds serves as an important space for students to gather, study, talk and enjoy music. Events hosted by the café include Thesis Thursdays, Late Night hours during midterms and finals weeks, pop-up music shows and open mic nights like the Coming Out Monologues. On Saturday, Nov. 10, the café also hosted its own Wall.

“[The Four Winds] is a community space that people use, and people have used it a lot this year, which is nice,” Cruz said, “but I’ve also seen it used way more. There were a lot of shows and bands [in the past].”

By continuing to utilize the café as a meeting space, students will not only enjoy delicious Four Winds catering and conduct their event in a cozy atmosphere, but also support a business run by their fellow students.

As the helm for the Four Winds is passed on from manager to manager, increased communication from predecessors would lighten the load placed on the shoulders of new staff. Cruz noted that there was little to no transfer of potentially helpful documents from past managers, although the Four Winds has been in operation since 1996. Preserving the café’s history for future generations and increased guidance from alumni would certainly give the Four Winds a clearer vision for the future.

The involved parties met on Sunday, Dec. 2 to discuss the future of the Four Winds. The results of said meeting were publicly unavailable at the time of publication. In early November, the café opened several staff positions for the spring semester and appears to be slated to open as normal after the holidays and independent study project (ISP) interterm. The Four Winds will close for the semester on Friday, Dec. 7.