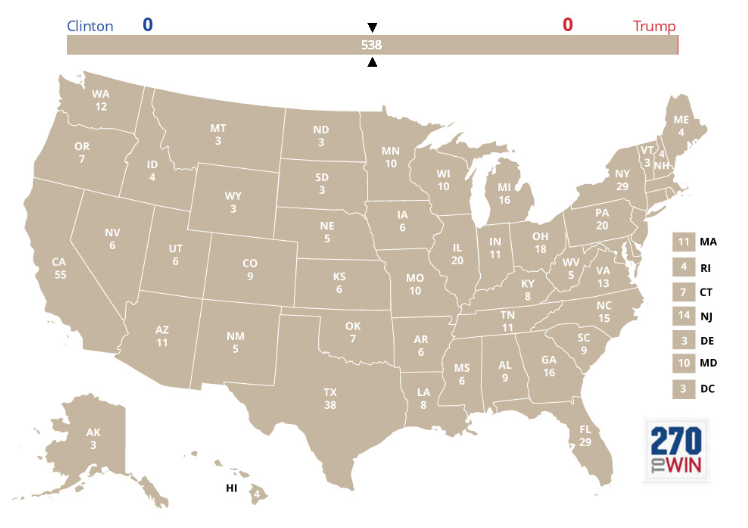 The electoral college has existed since the drafting of the Constitution, but many argue that it is an outdated form of government. In two of the last five presidential elections, the winner of the popular vote lost the electoral college vote, raising questions about the democratic process of American government.

What is the Electoral College?

Within this system, there are 538 electors. A majority of 270 electoral votes is required to elect the President. A state’s amount of electors is determined by its number of Congressional representative; one for each member in the House of Representatives plus two for those in the Senate.

The following states have the most electors:

But if the electoral college decides who wins the presidential election, does your vote really matter? Yes. Most states have a “winner-take-all” system in which states award all of their electors to the winning presidential candidate. However, other states like Maine and Nebraska function under a variation of “proportional representation.”

Is the Electoral College outdated?

In lieu of recent presidential election results, many people are pointing out the flaws of the Electoral College system.

“If you could separate yourself off from any political commitments you have and ask yourself ‘are there any reasons why this makes a ton of sense in a contemporary standpoint?’ it’s going to be hard to come up with those reasons,” Fitzgerald said.

In an interview with Sean Illing, Sterling Professor of Law and Political Science at Yale University Akhil Reed Amar argued that one of the major reasons for the establishment of the Electoral College was slavery.

“In a direct election system, the South would have lost every time because a huge percentage of its population was slaves, and slaves couldn’t vote,” Amar said.

Amar asserts that the Electoral College allowed states to count slaves, albeit disproportionately, providing the South an “inside track in presidential elections.”

“It definitely creates an advantage of smaller states over bigger ones,” Fitzgerald said.

This advantage is caused by a national disproportion of population size to electoral college votes.

“Your vote in Wyoming counts more than your vote in California,” Fitzgerald said.

“We have the general sense that the rule should be one person, one vote; everyone is equal as a citizen in the say they have in the electoral process.”

But the Electoral causes a disproportionate process of representation across the country. If votes are not truly equal, is this system truly democratic?

“The Electoral College is a violation of democratic norms,” Fitzgerald said. “But I don’t think it’s the biggest problem we have as far as democracy is concerned.”

Fitzgerald argues that the system that emphasizes the importance of equal opportunity also suggests that one must be wealthy to go into politics successfully.

“However, you can’t presume that the outcome of the presidential election would’ve been different; had we had a different system, a different set of rules, Donald Trump would’ve done things differently, and so would Secretary Clinton,” Fitzgerald said.

“You don’t know that Clinton would’ve won if you had a popular vote, and so the idea that somehow this outcome is illegitimate because he had fewer votes than she did isn’t totally justified.”

It seems clear, however, that the Electoral College is very outdated. Founded to create an equal playing field for slave states, the system creates a disproportionate value of one vote across the nation.