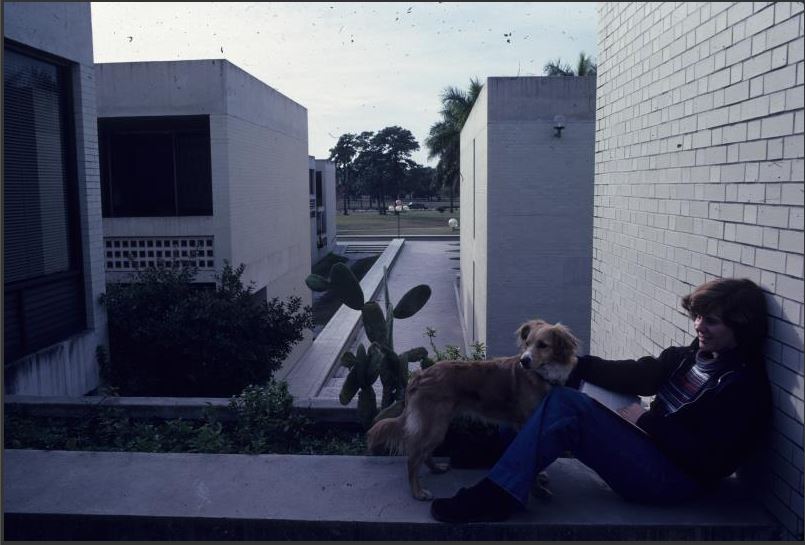 (Source: New College Archives Collections) A photo of Pei Second Court. The person in the photo is unknown.

“I talked to the roommate of the Dort door shitter. He said the Dort door shitter was Richard, and it was room 204,” third-year, Bianca Persechino said with a straight face to the Catalyst. “I don’t know if we are supposed to know who Richard is–but the alum who told me this also mentioned they came back to New College for years after graduating to keep the legend alive by telling people about Richard.”

Student workers at the New College Foundation have the unique opportunity to learn about past New College experiences. Listening to what alums have to share about their time at the school sustains institutional and generational memory. Spoiler alert: the past NCF was openly less reserved and more volatile than it is today.

Persechino works for the New College Foundation, which acts as a conduit of private funds for New College. Student callers contact New College alumnae to check in on their activities and ask for a donation to the school. Persechino tells the Catalyst that she really likes to take the time to connect with alums on the phone.

“I adore this school, but I kinda keep my main interest separate when I call. Almost always–even if they start off saying they don’t have money, that’s fine, can you tell me about your New College experience?” Persechino said.

For the time she gives to the Foundation, Persechino receives a growing understanding of notable events during bygone generations of New College students.

“‘Event Idol’–back when American Idol was a thing–was where New College students would congregate in Z amphitheater and propose their ideas for RA events, instead of just RAs deciding,” Persechino said. “It was cool because they would have this panel, and they would get the community to judge it and give input.

“There was this one time at an ‘Event Idol,’ where this guy kept on talking and it was so boring, and people were falling asleep,” Persechino continued. “And then all of a sudden these folks came out running from behind the hill in their underwear and masks with flares in the hands–they flipped over the panel’s table and then everyone started wrestling.

“It was all a convoluted pitch for lube wrestling, and it got approved for funding! They bought the lube, they bought the kiddie pools, and they were going to do it, but then the current dean confiscated all of it–some unspecified unit of measurement said to be in the hundreds. It was confiscated for two months, but it was released after, and they ended up having the party as planned,” Persechino recalled. Apparently, during the two months of confiscated materials, there were rumors amongst the student body trying to explain for the Dean’s ardent stance on possessing such large volumes of lube.

“One women from the first class of ‘64 said a hurricane ruined the dorms and she had to live a hotel for three months,” Persechino added quickly. “Another guy collected a bunch of grocery bags from stores and deposited them all over ham while a live band played. A lot of people were dancing and having a good time.”

“I also found out on Orientation day, the OLs and the RAs would streak together through the Pei courts that night as a sort of ‘welcome to New College,’” Persechino recalled. This was the case while nudity was still allowed on campus.

“I also found out how nudity got banned at New College: a body art Wall gone wrong. It was during parents weekend,” Persechino explained. “A parent visited campus in the evening while the Wall was grooving out, and saw their child streaking–didn’t like what they saw–complained, then got everything canceled.”

Persechino has also talked to alums from the early days of New College. One couple who met at New College recalled to the Foundation, “We used to smoke near and inside a 20-foot-tall steam roller by B dorm,” which Persechino admits is quite vague. The farther back in time alum stories come from, the more they are presented like a buddhist Koan: it’s hard to make rational sense of it.

“I also to got talk to this man from the first New College graduating class of ‘64, he was very funny. When he started, New College students would take these multi-disciplinary tests at the end of first year,” Persechino said. “They would spend six months studying for them, and the ones you passed you didn’t have to take it the next year. He passed them all, and ended up taking one class a term, which allowed him to get out into the real world during his New College education, which his advisor were supportive of.

“There’s always a lot of alums complaining about the changes to New College. There was this one guy who was all like, ‘what the heck, you guys should fight the administration, that would never had flown in my day,’” Persechino continued. “I have to let it go or else I get bitter.”

“They were also complaining about how we do our forum wars. One person said, ‘you guys just make these statements and use this point system to provide support, leading to a majoritarian rule model,” Persechino continued. “When we had forum wars we would write five page papers with citations. When you post on the forum, your reputation changes based on what you post on the forum, but that just how it goes. You say your personal states, you go on, and people either respect that or they don’t.’”

Listening to the past nurtures healthy consideration of the present. There are always going to be things about the past gladly seen as ‘no-more,’ but certain qualities and attitudes exemplified of these stunning examples have some spark of inspiration. There are more rules these days. Security is a priority, but alums’ recollections of their time at New College connotate honest, free and collaborative expression.