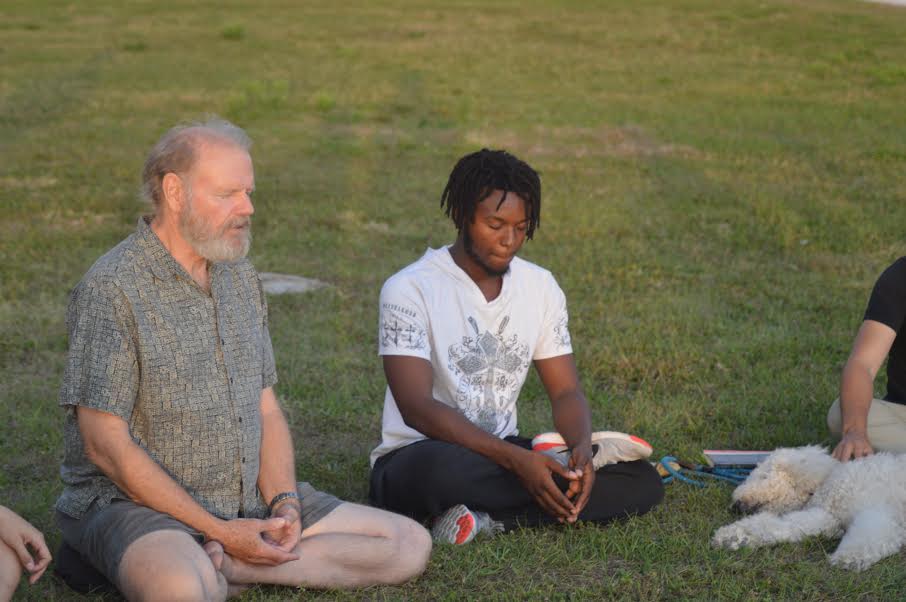 Stephen Gillum (on the left) leading meditation at the Bayfront on Apr. 12th after the one day fast some students participated in for the Boycott Wendy's campaign. Photo by Kelly Wilson

I started the New College voyage this Spring 2017 term and my personal vow to take up daily meditations has serendipitously been made easier because of it. This school has helped me foster the habits I’ve been wanting to enforce for myself and for that I’m thankful.

Immediately, I discovered that guided meditations were offered every Wednesday night from 6-7 p.m. in the Prayer and Meditation Room. However, the specific day it happens is subject to change every semester. The simple fact that the school has a space for students called the Prayer and Meditation Room hints at the spiritual nature of this place. In these sessions on Wednesdays, I met one of the most enlightened human beings of the 21st century (in my humble opinion) who for the last five years has dedicated himself to guiding students in these group meditations, Stephen Gillum.

“I’ve been meditating for more than 40 years. It’s a way to start my day where I feel connected,” Gillum said.

“Connected to what?” I asked.

Heavy words, but the type of inspiration I’ve been searching for. He might just be the Shams to my Rumi. Our conversation continued that sunny afternoon by the seemingly prehistoric Banyan tree at the Nook.

“There is a place inside that is still. That is the source of all creativity… and knowledge, true knowledge,” Gillum said with a slight grin and an austere persona.

Gillum studied Eastern meditation with his guru the Swami Lakmanjoo in India back in the late ‘70s. While I only have less than half a year of experience, these are all ideas I’ve found to be true. I’ve only gained positive effects from the habit of meditating as have some of my fellow Novo Collegians.

“It makes me feel relaxed at the very least. It allows me to be in the present moment on very busy days even if it’s just for a short period of time,” first-year transfer Myles “Optimystic” Rodriguez said. “Definitely I’m supplementing my sleep with meditation.”

The supplementation for sleep isn’t something to look up to too much, but it follows my original idea of meditation being something like conscious dreaming. At least for me I get powerful, practically life changing, visualisations that really feels like I’m dreaming, yet I’m wide awake and can then remember those visuals with longevity.

During the recent spring break, Rodriguez, who was living on campus for most of it, began opening the Prayer and Meditation Room every night and letting others know about it. Since then, it has still been happening with a few regulars, me being one of them, and that’s something I simply didn’t have in last school Florida International University (FIU). That type of social environment was just never found.

There are as many ways to do meditation as there are religions in the world. What matters most, as Gillum continuously instructs, is to relax, feel and listen. It’s important to understand that there’s nothing religious, spiritual, or mystifying about the practice of meditation. I think that’s a common misconception that stops many people from trying it out. At least for me, being raised Roman Catholic, I never thought of meditation as something I should be doing within the constraints of the religion, until I broke that barrier two weeks before arriving to New College.

Honestly it’s more physical and natural than anything else. As natural as breathing or walking. In fact, just by focusing on your breath you hone in on yourself, your essence. Listening to all the sounds around as if the world was a never ending song and letting the sounds come to you without labeling what they are or exactly where they come from is important to do too. Lastly, scanning your body from head to toe and every part in between helps you really feel and understand your body. Lots of times when we’re so busy with the restless thoughts parading our minds, we forget the bigger picture of things and even how we’re truly feeling.

The biggest thing meditation does, other than calming the mind and body, is that it puts you in the moment, as Rodriguez previously mentioned. Living in the present is what I’ve come to find, and countless others before me, to be the best thing one can do with the life they’ve been given. Why do you think dogs, animals in general really, are so happy all the time? They’re living in the moment. Then, if you are 100 percent aware and invested in your present you are totally aware of every decision you make that impacts every single moment afterwards.

So, meditation gifts its user the power to conquer their reality. It also helps the user connect with the greater source of energy, as Gillum described, whatever that may be. I always feel like I’ve gone into a slightly superhuman state once I’ve finished a session.

“It’s definitely hard to get people to come when so many stresses are happening on campus,” Vice President of Student Life and third-year Sophia Doescher, who helps maintain the guided meditation sessions, said. “As people get busier, it just becomes a non-priority.”

We usually think we have no time for anything, but self-care must be a priority. When well-rested anything is possible, if you’re forcing yourself to push forward when there’s nothing left in the reserve, you’re not being helpful to anyone especially yourself.

“I started doing it regularly when I started with the guided meditations in Spring 2015. It’s been great. It has provided me with the tools to get through some really stressful moments at New College,” Doescher said.

According to an article from Psychology Today, meditation has been scientifically proven to boost happiness, memory, attention, focus, creativity, emotional intelligence, social connection, grey matter in the brain, ability to introspect and immune function. It has also been proven to decrease depression, pain, stress, anxiety and even inflammation at the cellular level. So, in a way meditation is about mental hygiene. As the article puts it, “you shower everyday and clean your body, but have you ever showered your mind?”

In the little time I’ve been here at New College I can see how ridiculously hectic it can be, academically and socially. It’s even more important to tend to one’s well-being here than in many other places. You can accomplish the best things by being the best you. This is a thank you to New College, but also advice to New College.

“Most people are just constantly in a total state of fear and to be a healthy society we need to be in a state of love,” Gillum said. “And the only thing they can love is consciousness.”

The consciousness is you.