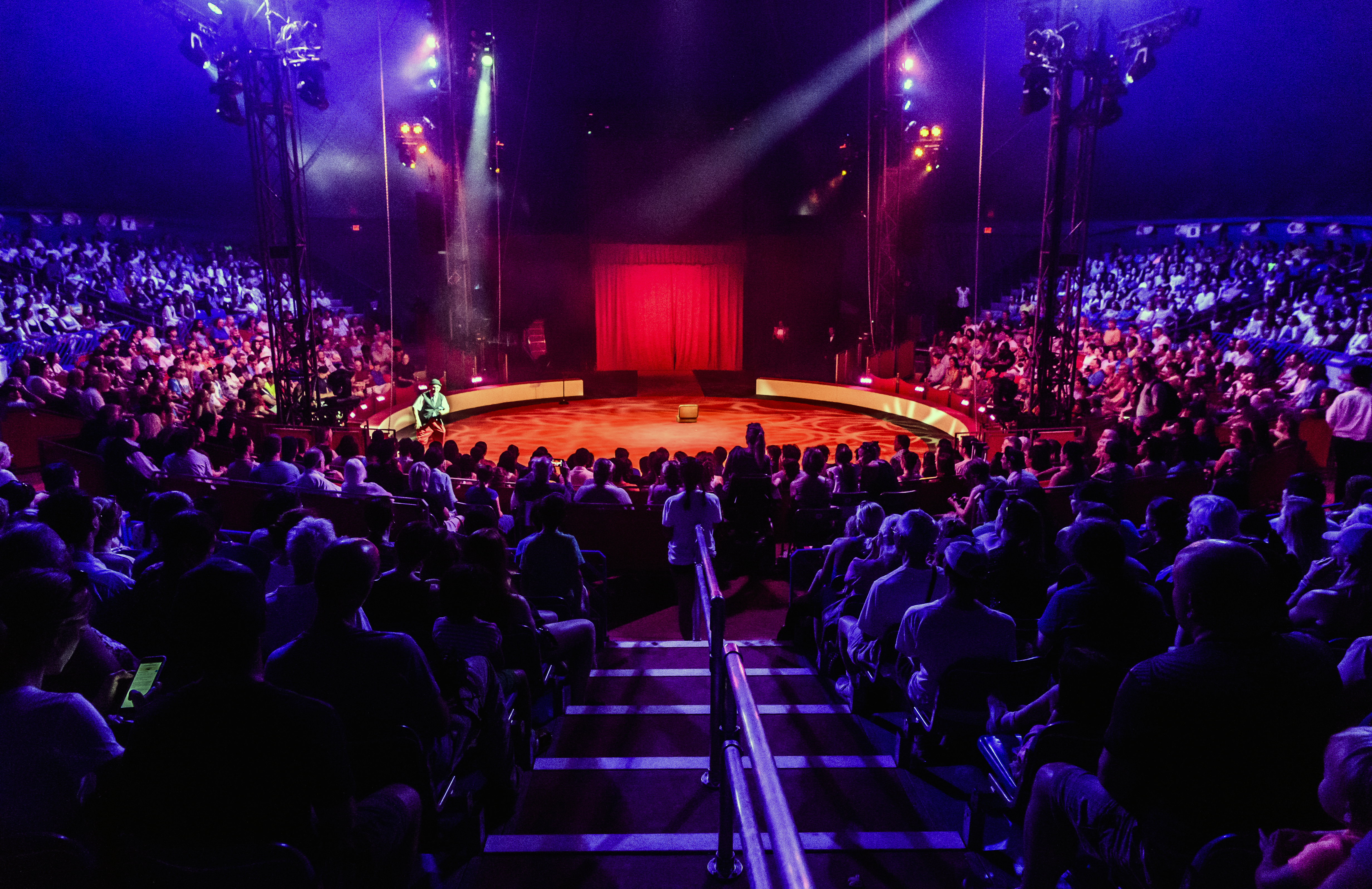 All photos courtesy of Rick Purdue

After a minute of darkness, an array of blue and purple lights suddenly illuminate an intimidating white pendulum. The intimate size of the arena makes the pendulum look particularly daunting. Out of the red velvet curtain steps Joseph Bauer Jr., the ringmaster who had, up until this point, announced the entire show with the larger-than-life charm one would expect from a ringmaster. He steps into the wheel at the end of the pendulum and his daughter, Ambra Andrine, uses all of her weight to push the physics contraption into motion. Within seconds, Bauer is more than 50 feet high, seemingly defying gravity with his mid-air jumps and rhythmic movements to The Incredibles theme song. He swiftly climbs from the center to the outside of the wheel, running on the exterior perimeter as it continues to spin. The entire audience gasps and looks up with astonishment. This is Circus Sarasota.

Circus Sarasota is a seasonal attraction that runs from Feb. 15 to Mar. 10. Every year, new international circus artists come to showcase their talents to the Sarasota community in the intimate one-ring European style big top.

“Some places are a little more reserved, but Sarasota audiences are fabulous because this is like ‘Circus City, USA’ on the map,” Bauer said. “People know the Ringling Museum, the Circus Arts Conservatory; it’s just a big circus town. To be able to see a big top show again in Sarasota, and a show like this, it’s bound to be a hit.”

Bauer’s parents came to Sarasota in 1954 with the Ringling Bros. Circus as headlining acts. They specialized in high-wire and sway pole acts. When Bauer was a student at Sarasota Junior High, he took circus education as an elective.

However, Bauer is one of the only performers who lives in Sarasota. This year, the artists hail from Canada, Italy, Sweden, Portugal, Russia, Colombia and the U.S. Though these are the performers’ native countries, their professions often take them all around the world.

“But we didn’t work for long in Italy,” Michelle Kolev said. “We stayed until I was 16 and then we started going to Spain, Germany, France, all over Europe.”

The two started their hand-to-hand acrobatic act in Paris, France and then worked at a Christmas circus in Germany. Immediately after, they came to Sarasota to prepare for the Circus Sarasota show.

“When we arrived here, we felt so bad because it’s very cold in Germany,” Nicole Kolev said. “The weather is very different, it’s very humid, so for your body you need some time to get used to that—we’re not machines, we can always fail, so we are always nervous before shows.”

The sisters talked about how they use those nerves to motivate them when they perform. The act was one of the most well-received of the evening, as they performed with ridiculous amounts of physical strength, balance and grace. They are the first pair of female hand-to-hand acrobats doing the tricks they are doing, as the base performer generally needs more strength to support their partner.

“In the end, if you want to do something, and you keep fighting, you’re going to reach it,” Michelle Kolev said. “And here in Sarasota, they really seem to understand and appreciate what we are doing. They will ask about the elegance, about the costumes, about so many things that make you understand their support.”

Because circus arts is such a unique field, many performers come from long-standing family dynasties. These descendants play an important role in keeping the art alive.

“We started with our parents,” Nicole Kolev said. “They are circus performers and are still working on the trapeze, so we were born into the circus.”

Others come from schools that specialize in circus arts, like Swedish teeterboard stars Einar Kling Odencrants and Anton Graaf. The pair met at the School of Dance and Circus in Stockholm.

“There aren’t many people who do circus,” Graaf said. “It’s growing, but it is still a very small community of people all in all.”

Coming from a gymnastic background, Odencrants was interested in the ability to do flips and tricks.

“When I wanted to start upper secondary school, I wanted to continue with my gymnastic training, so I chose the teeterboard and circus path,” Odencrants said.

From an audience perspective, the act looks thrilling, precise and dangerous. Using the teeterboard, the pair continuously launches one another into the air to perform tricks. What makes the act exceptional is how perfectly the two stick their landings on the thin board and how quick, fluid and accurate the rhythm of their jumps becomes.

“What we work for and why we train so much and so hard is that we want to minimize the actual risk,” Graaf said. “There are ways of saving yourself in case something doesn’t actually work out.”

“I was amazed at how well put-together all of the acts are,” first-year Adriana Gavilanes said. “They all flowed and had artistic movement even in the parts where there weren’t explicit tricks being performed.”

As Bauer—or any other ringmaster—would say: it’s a show you don’t want to miss.

Circus Sarasota continues to showcase these exceptional performances until Sunday, Mar. 10. Tickets can be purchased online or at the big top in Nathan Benderson Park. For more information, visit circusarts.org.