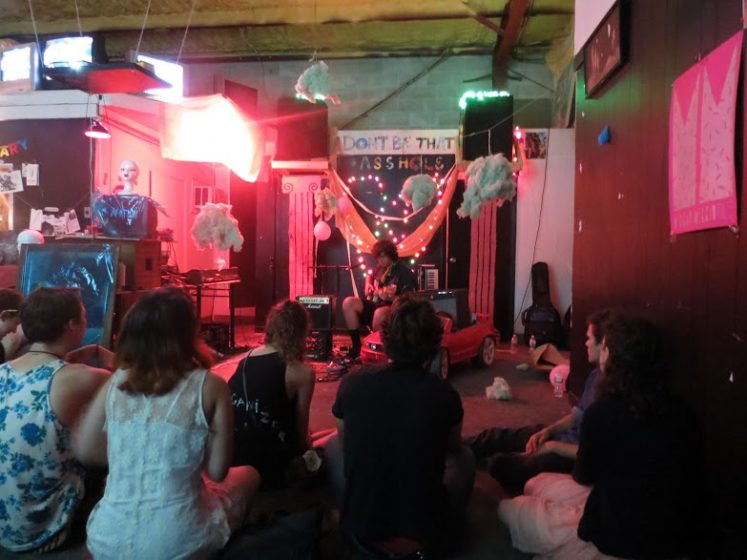 Thesis student Bradley Baker is one of serval students who has performed at Nothing Arts Center.

Not a single discarded TV went to waste for a period of time in Sarasota.

“People were […] thinking ‘It would be cool to line this [space] with TVs,’” thesis student Hedda Cooper said. “And then you would look out for all the TVs you could find on the side of the road that were in working condition so they can be hooked up to the monitor.” Letters were cut out of cardboard, second-hand pillow cases were gutted to make clouds, and couches were also taken from the side of the road.

“Literally, everything in there is garbage,” Cooper said.

The repurposed garbage house is Nothing Arts Center, occasionally shortened to Nothing, a rented warehouse nestled on Goodrich Avenue that hosts music performances, student art shows and workshops. However, for the team of Novocollegians, both current students and alums, including Cooper and Carillo, behind the space, it is a little less magic and a little more something that has been described as a burden to upkeep — mentally, emotionally and financially.

It all began with an ad on Craigslist.

“I was just looking for ads on Craigslist for warehouses, and they’re all super expensive so it’s usually a fruitless task, and I saw one of the most reasonably priced warehouses in all of Sarasota called Meadow,” Nothing organizer Jill Robitaille (‘10) said. “It was not only the cheapest warehouse, it was the closest warehouse I had ever seen to New College and Ringling and the North Trail Area and it was a good size and it was air conditioned!”

The idea of housing a space into a warehouse was an ingenious considering Sarasota’s noise ordinance policy.

“There has been a history of houses in Sarasota being used as punk venues,” Robitaille said. “There were also not very accessible or safe or inclusive. […] The warehouse is kind of a way to not bother anyone.”

Despite the bargain that the warehouse might have been, the organizers of Nothing did struggle to cover rent for four months.

The warehouse costs $650 a month with an additional $10-30 to cover utilities, meaning air conditioning and electricity.

Nothing profits from the $5 admissions fee for every event, the $20 monthly membership fee, which covers every event for that month and the $50 key fee, which allows members a key to use the warehouse space for art projects.

The $5 membership fee is split, half goes to making that month’s rent and the other half goes toward reimbursing the groups that have performed for that event.

“The space was super nice about letting us come ahead of time to set up and practice. They even shared equipment,” thesis student Joy Feagan said. Feagan is a drummer for Kenny’s Dad, a band that has previously performed at Nothing Arts Center. Feagan said that the band was more than compensated “with kindness.”

Even during these months, the organizers would still allow people to come to the shows for free.

“At first, we were putting in a lot of personal contributions, Jill put in a lot of her money and then we were making contributions upwards of $100 when it was first starting before we had a basis to do anything,” Cooper said.

Cooper said that Nothing now thrives off of admission and membership fees.

“Since it’s just a suggested donation, sometimes people will put in more money. Then we split the door money with touring bands,” Cooper said. With the consistent turnout at Nothing, the space has come a long way from the point in which it was close to being evicted.

“By the time of our first show, our air conditioning has broken and it was really hot,” Robitaille said.  “Most people were having a good time and were dancing. We woke up the next day to an eviction notice on the door. I was drunk at the time and calling the landlord.”

The eviction notice was due to a combination of problems. This included the number of attendees who were peeing in the bushes instead of using the bathroom next to Nothing and the fact that Robitaille had been living in the warehouse at the time.

“I called the landlord and we were on good terms,” Robitaille said. “It was fine, I just couldn’t live there anymore.’

Robitaille eventually crashed on the couch of the home in which several of the organizers also lived, Swamp House. This endeavor proved to be advantageous to the already close group of friends who were organizers.

Swamp House is where several of Nothing’s organizers live. The organizers of Nothing have attended school together, are close friends and have also worked on a student organization, All Power to the Imagination (API), at New College.

Carillo describes this dynamic as being “fucking difficult.”

“I think it can be really taxing in a couple ways,” Cooper also said. “First, it can be kind of hard to separate our work at Nothing from our interpersonal relationships. It can be hard to have disagreements because they can bleed into interpersonal relationships. It can also be really difficult if people are having interpersonal problems and then have to organize together and leave that outside. On the other side, it can also be really difficult to stop the Nothing conversations when we are not at Nothing or to have space outside of talking about it.” This is a sentiment also shared by Robitaille.

“When rent’s coming up, it’s stressful,” Robitaille said. “The thing is when I use these words it’s not an unwelcome stress or expenditure of energy but it definitely does and has put a strain. It becomes difficult to separate our work and friendship.”

Cooper and Carillo also describe the dynamic as being beneficial. They said that organizing for Nothing has, in certain ways, brought the group together.

The organizers have a lease that needs to be resigned in June, marking one year since the establishment’s existence in Sarasota.

“I think a lot of us as individuals came into this with the expectation that we would have our own lives too and will be leaving this place,” Carillo said. Carillo plans on leaving Sarasota within the next six months.

Despite the cost of running Nothing, the organizers believe that they have all had the ability to grow from this experience.

“I think that one thing that I’ve learned is that it’s a lot easier than you think to start something like Nothing,” Cooper said. “None of us really knew. We just looked at what other places like us had done and just took inspiration and methods from them and improvised our own. It’s been super possible to do and super fulfilling.”