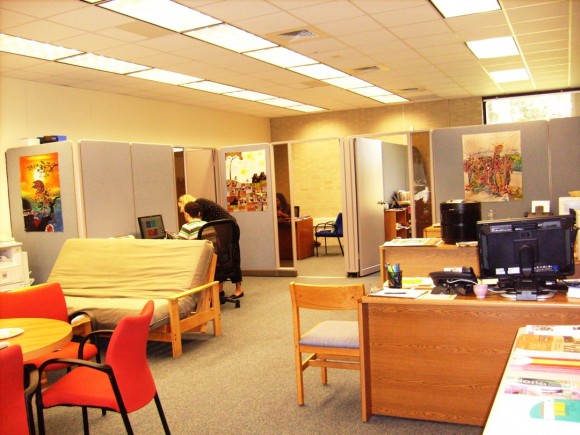 At the beginning of the spring semester the Center for Career Education (CCE) moved out of Palmer E into HCL 4. The move finalized the series of changes that began during the fall semester, including the separation of the Study Abroad office and the CCE. Study Abroad is now located in the Language Resource Center (LRC) and is headed by Florence Zamsky. Information about the National Student Exchange, however, is still filtered through the CCE.             Following the CCE’s move, director Cathy Cuthbertson hopes to see an increase in the center’s interaction with students.

“Now that we are separated from the Study Abroad office, we can focus much more on the career education aspect of what we do,” Cuthbertson said. “When we were in the Palmer complex there was a feeling of disconnect from the student body. Now that we’re in HCL 4, the proximity of students makes it much easier to communicate and I think it makes us much more accessible to students.”

As a kick-off to their new location, the CCE will be hosting a viewing of a documentary entitled The Dreamshare Project in the Black Box Theater on Apr. 4 at 6:00 p.m., which will be followed by a hands-on career development session. The documentary focuses on liberal arts students following their dreams after graduating from college — something Novocollegians know all about. Although New College boasts a high graduate program acceptance rate — between 2004 and 2008, 87 percent of Novocollegians who applied to graduate programs were accepted — there is an increasingly large number of students who choose to take a gap year following graduation.

“Many students are opting for a gap year rather than going directly onto a graduate program,” Cuthbertson said. “Students are applying for Fulbright scholarships, research fellowships and teaching apprenticeships, mostly. There are some who choose to intern or travel abroad, but it is more difficult to find programs that cover those expenses.”

For students in their third and fourth years, graduate school admissions tests are daunting steps on graduate programs’ application checklists. Many students need to take practice exams or prep courses, but they can cost upwards of $1,200 for a few sessions. USF Tampa offers prep courses that can be taken in smaller modules depending on what area a student needs to focus on. Although there is a commute, Cuthbertson said that the savings might outweigh the driving time.

The CCE isn’t only available to upper-year students, though. For first- and second-year students, the CCE offers assistance with polishing a resume and can provide resources for internship applications. The office also works strongly with local companies to compile lists of off-campus jobs for students and internships in the area — the abridged versions of these guides cover over 70 pages of resources.

“We are all really excited to move ahead with this fresh start,” Cuthbertson said. “We are fully focused on career development now, and I think that it will show as our involvement increases.”