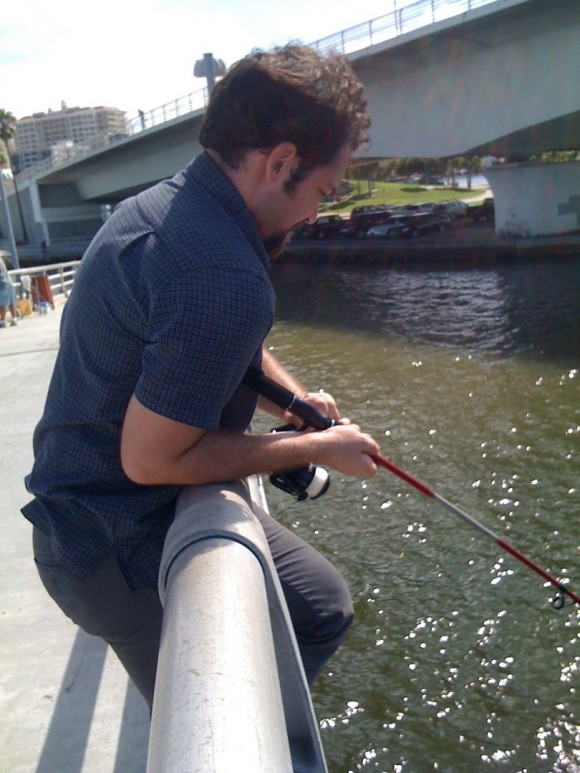 Thesis student bailey Howard clings to the Tony Saprito Pier as he tries to reel in “the big one.”

New College’s location on Sarasota Bay provides students with access to what some call the best beaches in the world. While many students are aware of the hours of fun local beaches can provide in the form of swimming and tanning, some have never considered fishing. To correct this injustice, the Catalyst tried out various fishing holes everywhere from on New College’s campus to Lido Key and has created a short fishing guide to the area.

A bag of frozen shrimp, the most versatile bait to use in Sarasota, costs about $5 and can last for several fishing trips depending on the length of said trips. One less obvious, but certainly not less helpful, item to have is a pair of gloves. For only $3, fishermen can protect their hands from getting jabbed by fish spines and simultaneously ensure that their catch will not escape their rubberized kung-fu grip. A cooler and a bag of ice, running about $7 are two other essentials especially if the fishermen/women in question are intending to keep the fish they catch.

At an initial cost of about $50, fishing might be seen as a bit costly at first, but the hours of use one can squeeze out of these implements of fish collecting are likely to pay themselves off quickly. Once all the necessities are purchased, subsequent fishing trips should only cost about $8, for ice and bait.

Fishing can be extremely frustrating when one’s bait gets eaten, and fish escape the perils of the hook. One of the best ways to avoid this frustration is baiting hooks properly. The simple way to bait a hook with frozen shrimp is to pass the hook through the back of the shrimp. A second school of baiting thought prefers to thread the hook through the shrimp and only have the tip protrude from the bottom or top of the shrimp. No matter how one baits his or her hook, the most important thing is to make sure that there is no part of the shrimp a fish can bite without swallowing the hook as well.

Once the line is in the water, the best fishing technique to use with frozen shrimp is to constantly move the bait. Rods should be periodically tugged and the line reeled in slowly to mimic the movement of a live shrimp. With any luck and a small amount of patience, fish should start nibbling in no time.

The College Hall bayfront is the most accessible fishing spot for Novocollegians. Since fish are not an uncommon site, swimming up and out of the water to escape bigger fish, it was an obvious place for the Catalyst to test. After spending an hour and a half fishing by the Bay it became clear that the standard reel and rod wasn’t going to catch these flying mullet. Those interested in catching the mullet seen in the bay should invest in a $20 to $40 cast net. Wade out into the bay, cast the net and catch the mullet. With so many fish in the Bay, it’s as easy as that — once one’s net casting technique is refined.

In addition to mullet, the Bay also is home to blue crab which can be caught on a cast net or a rod and reel. While the use of a cast net is preferred when fishing for crabs, the Catalyst was able to catch a crab sitting to the left of the dock using a rod and reel.

Don’t expect too much excitement by fishing at the bay with a rod and reel. However, fishing with a cast net can be a lot of fun and bring in a good amount of fish.

At the foot of the John Ringling Causeway lies Causeway Park, easily the best place to fish in Sarasota if you don’t have a boat or access to one. The entrance of the park is on the right of the John Ringling Causeway and leads down to a large pier, park and bait shop. The bait shop, named Hart’s Landing, has been a family owned and operated business for 76 years and is a great place to buy fishing rods, hooks, fresh or frozen bait and even snacks.

The waters around the T.J. “Tony” Saprito Fishing Pier have never failed the Catalyst. Every time the Catalyst has gone to fish at Causeway Park, no matter the time of day or night, fish are plentiful. The park is the perfect place for the more impatient fisherman since it’s quiet common to cast out and immediately get a bite.

The sights at the pier unique attractions. Everything from manatees to stingrays and even dolphins can be spotted throughout the day.

Fishing at Causeway Park will change the opinions of those who find fishing boring. Over the course of five fishing trips, the Catalyst caught upwards of 20 fish and six were big enough to keep.

Less than half a mile from Mote Marine Aquarium lies Overlook Park. Nestled under the bridge that connects Lido and Longboat Keys, the fishing area is a habitat for small fish. While the smaller fish excel at wiping hooks clean without getting caught, the Catalyst was able to land one or two fish. The fishing may not be as good as Causeway Park, but the fishing at Overlook Park is in a beautiful setting where seeing 15 manatees at one time is not uncommon.

Fishing in Sarasota may not be the first thing that comes to a New College student’s mind when looking for means of entertainment, but it’s a relatively cheap way to relax, get dinner and have a lot of fun.