JV and I blet out the backup vocals at her old stomping grounds in Boston.

Continued from the seventh issue.

She got four utterly blank stares in response. I thought we were about to get kicked out of the restaurant or something.

The show in Lansing provided an enormous turn-out: over 200 people, easy, came out on a Monday night to catch us on the bill with psychobilly greats Goddamn Gallows and the Creepshow. We needed the morale boost dearly in order to survive the drive back to Lebanon, N.H. that night. JV’s mood took a turn for the grouchy, however. The fella taking all the photos for the gig chatted her up at the bar for a while after our set, then finally got around to asking her if I was her daughter. I couldn’t tell who she wanted to slug more: him or me.

All told, it took us about 18 to 20 hours to crawl over hill, over dale, through midnight until afternoon and then some to get back to New Hampshire. Ordinarily it should have taken perhaps 14 hours, but we suffered a setback or two. Most memorably, the band left me behind at a service station in Wyandot, Ohio. It was 5:00 in the morning, so I suppose I can’t blame my fellow band-mates for being a little groggy and absentminded. But it kind of stung to know that they could have gotten a lot farther than 20 miles down the highway before they’d have noticed I wasn’t in the truck. Good thing I had my cell phone on me. Seandave told me he felt his iPhone vibrate, checked to see who was calling and ignored the call. When he turned around to tell me I was pocket-dialing him in my sleep — yeah. You get it. Seconds after he hung up on me, Sean called me back. 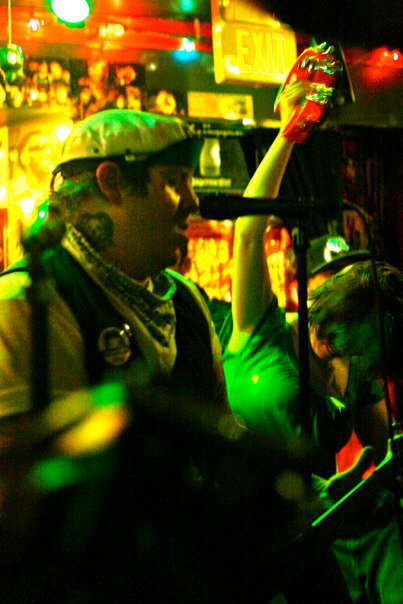 A shot from the end of the road in Jersey City.

We skipped the show we’d booked for Tuesday night in Toledo. Everybody in the entourage was sick, getting sick, or getting over some sickness. I personally was having a tough time dredging up the energy to play the fifth and sixth straight shows, so a night off came as a welcome respite from the road. Our show in Boston the next night was small, but we definitely did some of our highest quality playing that night. The ensemble was getting very tight, despite the fact that the last time I played these tunes was in January; despite the fact that this tour was JV’s first time playing with a band in 10 years. My sister drove out from Providence to catch the show. She loved it. We drank gin drinks and ultimately had a tough time saying goodbye.

The band gets the royal treatment every time we play in Kingston, N.Y. — the owner of Snapper Magee’s stuffs us with free burritos and then throws us more drink tickets than we can shake a stick at. We played with a band called American Pinup. As with the Creepshow, a very attractive wisp of a girl sang and played a hollow-body Gretsch guitar. After Lansing it was Brandon who came away all googly-eyed. This time it was Rob.

“But Rob,” I reminded him, “you told my sister the same thing all night at the last show.”

Scranton, PA was simply glorious. We drove from Kingston that night to crash at our good friend Mike’s house, where Rob and I stayed up until after 7:00 a.m. drinking beers with Mike and his sweetheart Bella until passing out on the floor. I then snuck out around noon to spend a couple of sweet hours by Lake Scranton with Tim, the love of my life, who flew all the way up from Sarasota to see the last two shows of the tour. I’m so glad he got to catch the show that night. We ripped through the set in front of a boisterous crowd of die-hard Rebels fans. They knew the words to every song. They danced. They moshed. They crowd-surfed and stage-dived as much as the tiny café permitted. I became their musical super-heroine for one night.

At last, the swan song. Our final show went down in Rob’s hometown of Jersey City. We squeezed into the front of a tiny bar called the Lucky 7 Tavern. No stage for us — the crowd pressed around us until I thought they’d push us right back out the door. I’m not a big fan of playing on the floor, due to my fill of past experiences with accidentally stabbing folks with my bow, jerks sloshing beer on my fiddle, or worse: moshers slamming the mike into my face. Dan and Brandon have a few chipped teeth between them as tokens of shows on the floor. Fortunately, this crew was all smiles, dancing and singing along.  Very well-behaved, in my opinion.

Touring is an exhilarating experience, but it’s one of the most grueling lifestyles imaginable. It’s also addicting. No matter the bumps, scrapes and brouhahas, I’ve gotta admit I’ll always be rarin’ to hit the road again. And again, and again.