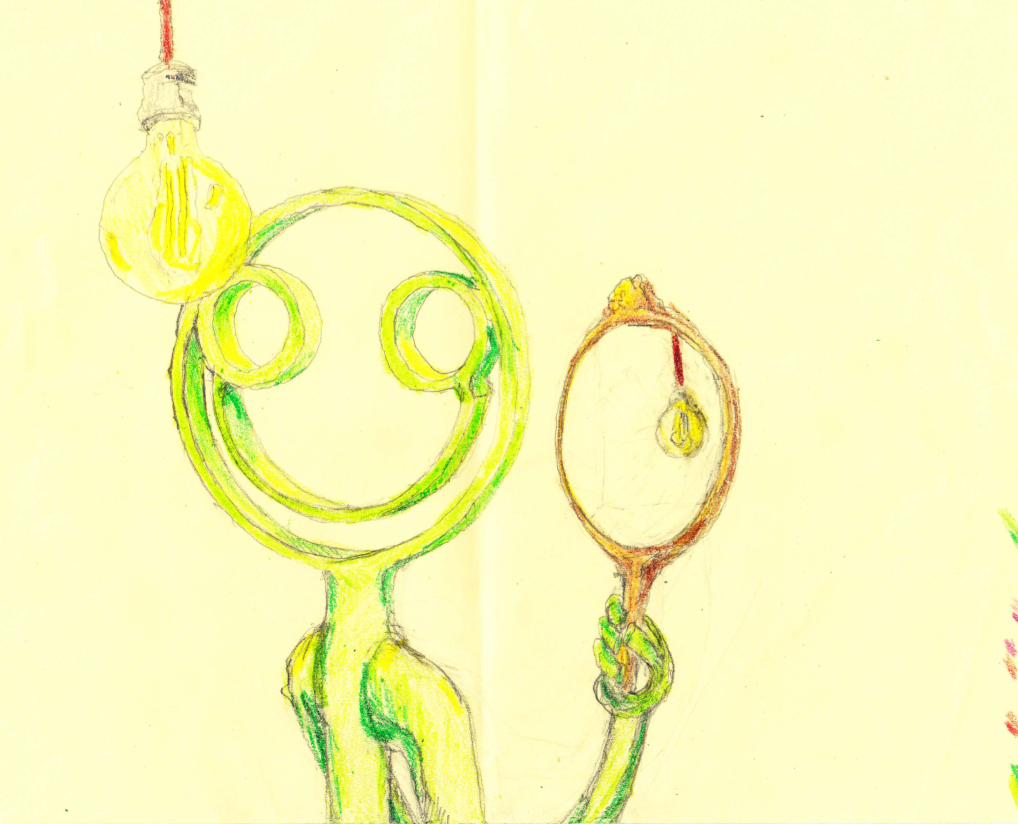 A drawing of Tube-Dude in front of a mirror.

If you’ve spent any time in Sarasota, it’s likely you’ve come across a brightly colored, aluminum figure, otherwise known as a Tube-Dude. Throughout the area, there are hundreds on display, and whatever color, form or situation you might find a single Tube-Dude in, they are easily recognized by their striking simplicity and patented smile. One might ask: Where did these come from, and what is their purpose?

“The birth of a [tube] dude,” creator Scott Gerber explained, “begins when a customer walks through our door. We’ll sit down with them and we’ll say, ‘What does your happiness look like?’ and ‘Tell me what you want to display to the rest of the world.’”

The inspiration for Tube-Dude came in the midst of desperation. It was a story of “losing everything and then totally reinventing one’s self,” according to Gerber. He had once been a Ship’s Captain in the U.S. Merchant Marine Academy, delivering crude oil overseas. Gerber remembered a time when “[he] spent three years on a boat without getting off the vessel.” He later served as the captain of various sport-fishing boats, the representative and bodyguard of a yacht proprietor and eventually founded his own yacht building company in Sarasota. The business had only just gotten off the ground when the recession hit hard, and Gerber was forced to stop operations. He laid off more than 50 employees, a situation he described as “the toughest thing [he] ever did.” Still in grief over this misfortune, inspiration struck while he sat in U.S. 301 traffic on the way to work. That day, he and another welder began a small project to lift their spirits: a smiling “stickman” made up of various boat parts left around the warehouse.

Five hours later, the first Tube-Dude was born. This aluminum figure was given a fishing pole and left to its own devices at the end of a wooden dock. Estranged from the world and indifferent to the financial crisis, Tube-Dude felt only rain and salt, the swelling and contracting of boards beneath its feet and the coastal breeze that would sometimes circulate throughout its limbs. Tube-Dude stood alone in the elements, fishing pole in hand, and smiled despite everything.

This did not go unnoticed. People stopped their cars to take pictures with it, and soon neighbors asked for their very own Tube-Dudes. Gerber kept making them, and left a few of them around Sarasota. They faced highways and held up signs with positive messages, such as “SMILE!” Tourists and locals alike came to love Tube-Dudes for their simple gestures of optimism.

The microcosm provided by an inventory of 100 Tube-Dudes is an interesting one. Many are in the act of fishing (with a license), golfing or shopping. They are often doctors, tourists, construction workers or professional athletes—though there are very few children in the community. Off Tamiami Trail, a Tube-Dude holds a water-pipe and watches passing cars. There are UPS drivers, at least one appointed judge and what appears to be a priest. The world envisioned through the eyes of a Tube-Dude is one of leisure and high-end health care, construction projects and redevelopment, law and order.

The official website features a message from Tube-Dude: “I want to do one thing, put a smile on your face.” As the artist, “you pick the pose, the size, the color and even the personality (hopefully it’s a reflection of your own).”

Tube-Dudes are a display of status unique to the symbolic realm of Sarasota, and can cost as much as $2,000 each. They are often spotted in dense, coordinated groups. Some neighborhoods or commercial centers find Tube-Dude more infectious than others do. Regardless, there is a sort of competitiveness involved in them. When a Sarasota Starbucks ordered a Tube-Dude, it only made sense that a nearby Dunkin’ Donuts soon ordered two of their very own.

Whether you hate them or love them, each Tube-Dude was someone’s answer to the question: “What does your happiness look like?”