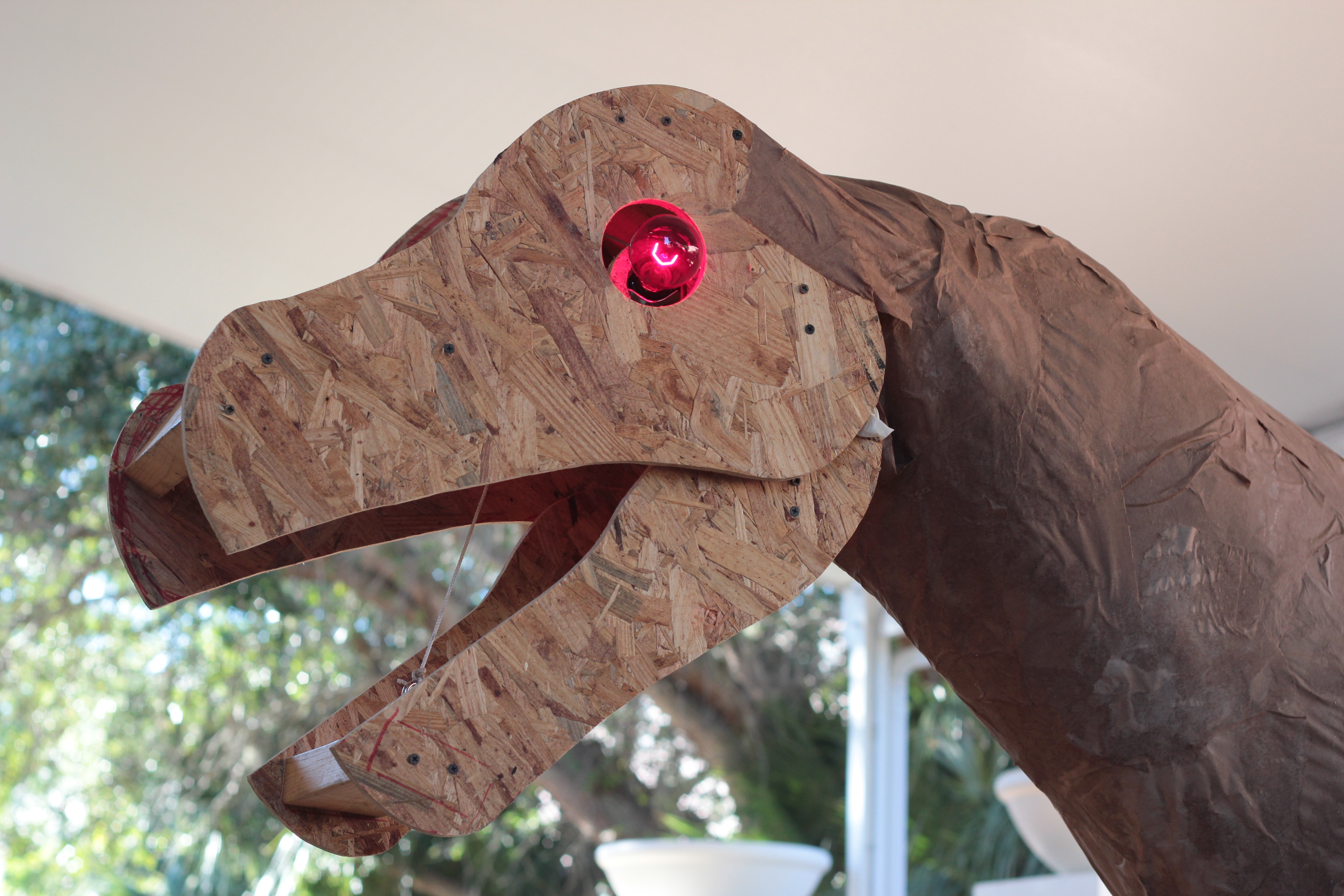 The biggest party on the New College campus is the famous Palm Court Party (PCP), and the only way they happen is for brave souls to take the initiative and throw it. The festivities have traditionally spanned campus wide and are known to coax impressive congregations of New College folks out into the open. The party, which occurs three times every school year, parallels the school’s past ‘work hard-play hard’ ethic, and just like about everything else at NCF, throwing the PCP itself takes intention and a lot of work. In more recent times, however, the art of throwing the massive event has become trickier as its organization changes. 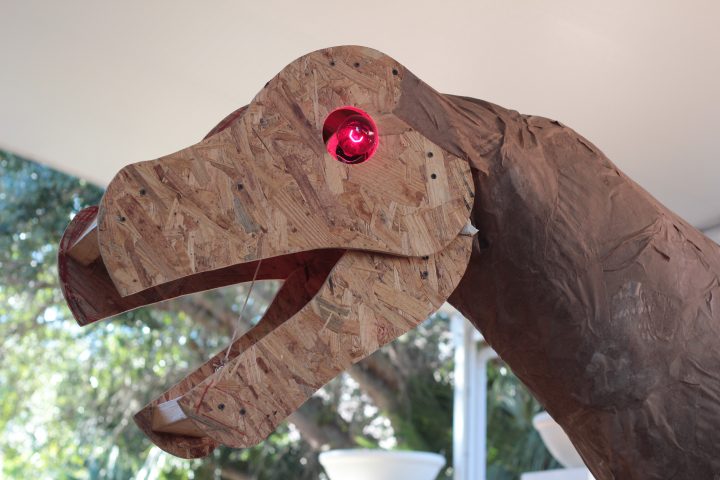 Decorations have a habit of staying on campus even weeks after the festivities are over–like the papier-mâché dinosaur created by alum Blake West (’13) for the 2014 “Dawn of the Angiosperms” PCP. (Pariesa Young/Tangent)

“I have always enjoyed throwing Walls and other events around campus, and PCP was always the big one,” thesis student and February’s PCP co-host Zach David said in an interview with the Tangent. Thesis student Mei-Jing Bernard was the other PCP co-host for “Time Travel” PCP on Feb. 17, which coincided with the alumni reunion.

“It seemed difficult but, a good experience–to actually throw a PCP and know what its is like, especially having been to so many,” David said. “I remember thinking a year or two ago, ‘February PCP my fourth year. I think that would be a good one to throw, because the [Independent Study Period] ISP term allows for more planning and less stress.’”

“If we hadn’t done the planning during ISP, it would have been a trainwreck with classes happening at the same time,” Bernard told the Tangent in an interview. “With worrying about a thesis and trying to coordinate meetings and stuff, ISP gave us the opportunity to have an open schedule and talk to folks or pick things up at any time.”

Bernard and David also had their eyes on this last February PCP date for reasons closer to New College’s heart.

“Past November, I heard that an alumni reunion was happening around mid-February–and the date for the party was then being voted on–so I suggested to the forum that folks should choose to have it on that weekend,” David said. “Then it got picked, and a few days later Mei-Jing told me that they had an idea for PCP. We sat down and talked for a while and thought okay ya this sound good, let’s do it.”

“It was all born in the [Writing Resource Center] WRC along with [third-year student], Bliss Aruj,” Bernard said. “I had been really bored and was on NCF Daimon page and thought all of these people reminisce so much about their past and all the good times that they had. It would be great to find a connection ground between alumni and students.”

Bernard believes that creating and having that New College network is important for finding your place and know what you’re doing.

“Then I started asking them, ‘Hey, what was your favorite PCP?’ It was a whirlwind,” Bernard continued. “Hundreds of responses came back–it was beautiful and natural. That is when I decided I want to throw ‘Time Travel PCP’. All the time lines came together.”

Many of the alumni who ended up showing up to Bernard and David’s PCP had experienced at least one or two of the PCPs that were honored in this last “Time Travel” theme.

“I really wanted to hold decoration making sessions,” David said. “My distinct memory is people doing that for “Get Shwifty” graduation PCP, 2016. If you want a lot of decorations you should hold a bunch of those, and I think we held six or seven. I brought treats to the first one to bring folks in. The day of PCP I kept on running into people in Palm Court asking people to, ‘Walk over there and pick up those things’ and people seemed happy to do it.”

“That’s how they used to do it–a massive collaborative effort,” Bernard said. “They would get together the day of PCP and set it all up together, and I think it’s a good idea and should be done in the future–though it was maybe a little chaotic. It’s a simple thing. Show up for 30 minutes and hang all this on the wall.”

“Planning a PCP takes a lot of organization,” David said. “From the beginning, we were trying to make it as organized as possible. To the best of our knowledge this is the first time there were two live music areas, which allowed us to have both live rappers and bands. We figured that with the alumni reunion there would be enough people.”

For this last PCP, the hosts were allocated $5,000 from the Student Allocations Committee (SAC) budget, according to the Coordinator of Administrative Services, Dawn Shongood in an email interview. About $2,000 was spent on security, and Shongood says the security budget is slated to increase next year. According to New College alumni on the Daimon page, PCPs cost as little as $200-300 in the 1980s.

Foresight is needed for hosts to properly distribute the funds. Even with this amount of money, the decoration budget has to make room for the performers–and decorations can’t ever be too elaborate.

“You pick a theme and you go for simple and wow-factor,” Bernard said. “We went with flowers and dinosaurs.” She added that the New College Student Alliance (NCSA) came through with their art supplies, and that Aruj single-handedly made the Dune space in the Nook, which people hailed as book-authentic. Aruj was also credited with the 3-D puzzle dinosaurs idea.

“I would not have thrown PCP with anybody but Zach,” Bernard said, “because the hardcore organizational skills are so crucially needed. We had Excel spreadsheets with multiple pages!”

“We don’t know if people had used spreadsheets in the past,” David said. “But it just seemed like the right thing to do. For example, the first thing I wanted to do is plan for decorations. We made a table for each of the five areas we were setting up. We added links with the prices of things, and then totalled them up for the whole decoration budget. Saving the links in the tables made it a lot simpler, because we could quickly email purchases to Dawn Shongood.”

Organizing the music performances is arguably the most important task for party throwers.

“The main thing we were worried about was talking to the musicians,” David said. “We got help from other people, and it turned out to be simpler than I initially thought. You just get their email, email them, if they don’t respond to that, you get their number. People were also hitting us up who wanted to play or knew other who wanted to play, so it handled itself in terms of finding performers.”

There are a few crucial items that are needed from PCP performers in order to play, which requires tenacity on the part of the throwers.

“There was information we needed from the artists [like things for their performance and tax forms] and some bands were not good at responding,” David recalled. “For one rap group, the only way to get them to respond was to DM them on Instagram, and I only figured that out because I happened to go to a show they were playing at a few weeks before PCP.”

Be prepared also for endless emailing, and unread inboxes every morning.

“Some days I woke up to three facebook messages, six emails and a few texts–and I told myself alright gotta deal with this,” David said.

David and Bernard both enjoyed their time at PCP heartily, especially during their hand-picked set times or when folks thanked them for such a swell time.

Working with the New College administration & The PCP guide

The PCP hosts are also responsible for acting within the rules of the New College administration.

“Make sure you know the expectations for the PCP sponsors by Housing,” Bernard said. “They can’t be expected to do everything exactly right. You need to put in the effort to make sure everything is clear between the two of you each step of the way.”

“We wanted to make an accessible PCP guide for sponsors, so they could have an easier time with the party planning process” third-year Emily Via told the Tangent in an interview. Via hosted “Seven Deadly Sins PCP” in 2016 and was the Speaker for the Town Hall meeting last year.

“I have the whole guide typed up, but the major roadblock with it is the structural changes to PCP over the last few years,” Via said. “A lot of what is in the guide would have to have been changed and it seems like the parties conditions will be constantly changing. Additionally, the standards for PCP are different depending on who within the administration is talking, which makes things confusing. PCP is becoming harder to deal with.”

Before we have a comprehensive PCP guide, Student Affairs and the student body have got to work together to have a clearly defined structure for this event. New prohibitions like using the Black Box space, chill-out rooms, increased security–which takes up more resources–or growing substance-free spaces puts stress on party-throwers to appease everyone.  Despite the growing obstacles, however, PCP remains a tradition which continues every time folks take the initiative.