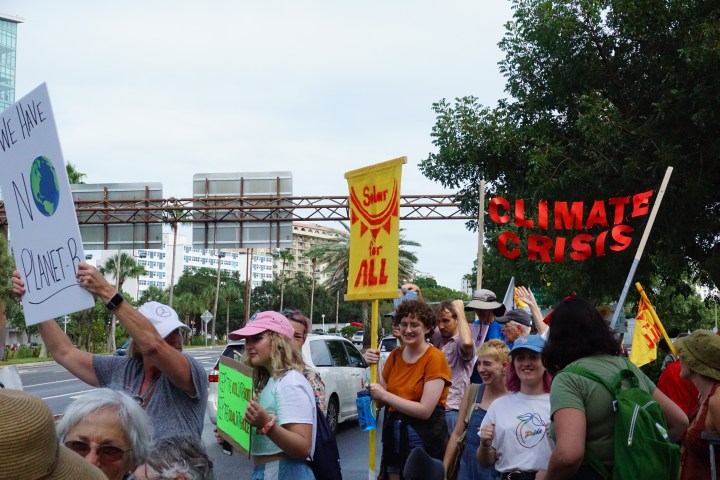 Throughout this week (12/4–12/11), activists have the opportunity to participate in strikes, film festivals and panel discussions. Read on if you want to get involved in the community regarding environmental activism, local politics and healthcare reform.

Medicare for All Town Hall

Gain a greater understanding of one of the most highly-discussed policies in modern American politics at Sarasota-Charlotte Democratic Progressive Caucus’ Medical for All Town Hall. This panel discussion and following Q&A will feature several local experts, including New College’s own Professor of Economics and Environmental Studies Mark Paul. This event is free and open to the public.

Marina Jack’s “Unconditional Surrender” Statue  – Island Park Drive, Sarasota FL
Protest the rise of global greenhouse emissions and encourage local leaders to take a firm stance on the reduction of waste and pollution at Sarasota Students 4 Climate Change’s second Global Climate Strike. Activists of all ages are encouraged to participate by making and displaying signs that demonstrate their support for climate change action. This event is free and open to the public.

Spend an evening with some of Sarasota’s most passionate young conservation leaders at Mote Marine Laboratory & Aquarium’s annual Community Ocean Film Festival. The festival, which showcases projects and films created by young environmental activists, will also feature a special screening of Ian Cheney’s The Smog of the Sea, along with a silent auction and fundraiser benefiting Mote’s Youth Ocean Conservation Summit program. This event is free upon registration and open to the public.

The State of Native Americans: A Conversation

Join Indigenous Sounds radio hosts Sal Serbin and Barbara Huntoon for a discussion regarding the past, present and future of Native American lives and rights at “The State of Native Americans: A Conversation.” This talk will continue to delve into several themes present within Fogartyville’s recent “Native America: Giving Thanks” exhibit, which explored Native American history, tradition and spirituality through indigenous art and music. This event is free and open to the public.

Get acquainted with fellow democratically-minded young community members and celebrate some of 2019’s political victories at Manasota Young Democrats’ (MYD) yearly holiday party. This event will allow those outside of the organization to learn more about MYD and what the group does within the Sarasota community. This event is free and open to the public.