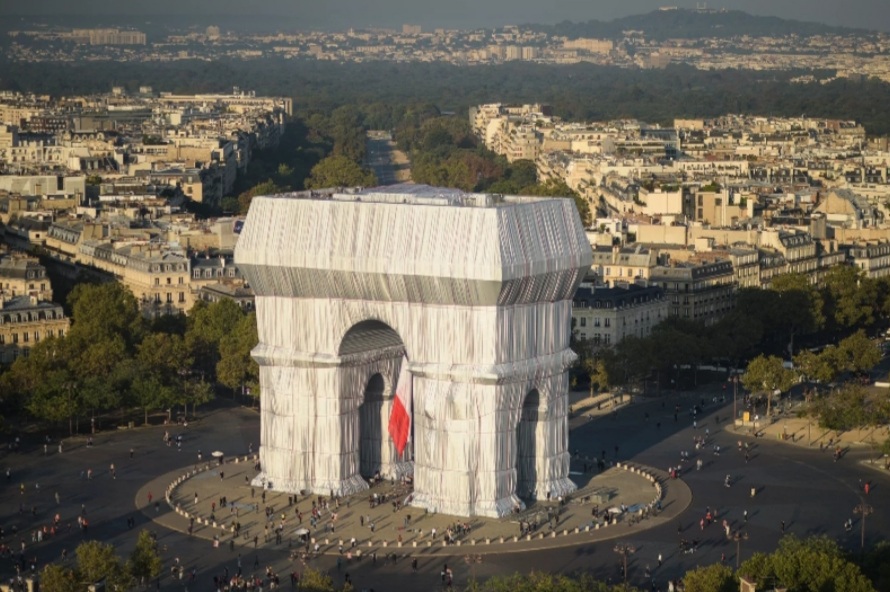 L’Arc de Triomphe, Wrapped, from above. Photo courtesy of Benjamin Loyseau and the 2021 Christo and Jeanne-Claude Foundation.

Conceived in 1962 by artists Christo (1935-2020) and Jeanne-Claude (1935-2009), L’Arc de Triomphe, Wrapped, was finally realized per Christo’s wishes this past month in Paris nearly a year after the artist’s passing. Throughout their lives, the artists made clear that their planned projects come to fruition after their deaths. Lasting just two weeks, the posthumous installation wrapped the Arc de Triomphe in its entirety in silvery blue recyclable polypropylene fabric and red rope and was on view for 16 days from Sept. 18 through Oct. 3. A massive triumphal arch commissioned by Napoleon I in 1806 to celebrate the victories of the French armies, the Arc de Triomphe is now one of the most iconic global monuments, serving as a symbol of French national identity. Though ephemeral, the work of Christo and Jeanne-Claude has redefined the iconic monument and its surrounding area.

Arriving in France in 1958 after fleeing his native Bulgaria from communist rule, Christo met Jeanne-Claude, who became his wife and creative partner, in Paris the same year. The shimmery blue shadows and reflective white light cast by L’Arc de Triomphe, Wrapped, in addition to its red ropes, subtly suggest the colors of the French flag. In defense of the installation’s subjective meaning, project director and nephew of Christo, Vladimir Yavachev, said at its inauguration, “People can make out of it whatever they want and feel. Ultimately, Christo and Jeanne-Claude’s work is about freedom and this is an expression and a scream of freedom.”

When asked about the duo and their contribution to the public art world, Assistant Professor of Art History Katherine Brion mentioned the affinity the artists had for disrupting space with fabrics and color, allowing viewers to see unsurprising surroundings in a new and reanimated way. For example, previous installations include Surrounded Islands (1983) which circumnavigated eleven Biscayne Bay islands in bright pink floating polypropylene fabric. Another, The Gates (2005), marked twenty three miles of walkways in Central Park with free hanging saffron fabric panels in the otherwise dreary colorscape of New York winter. The artists also famously wrapped the Reichstag building in Berlin in 1995.

“It just changes everything,” Brion said, remarking on the function of these projects. “So rather than having an everyday kind of mundane space—even things that are very spectacular sort of visual structures, monumental structures—you get used to them and then once they’re wrapped by Christo, suddenly you notice that space. It demarcates the monument or the space that he’s working with, but it sort of turns it into something else. So rather than this statement of Napoleonic victory or historic Paris, it’s this contemporary art form that’s erupted in the middle of the space.”

Costing around 14 million euros—approximately equivalent to $16.5 million—the work has been heavily criticized by French media as bourgeois art. In the way that art tends to do, the installation quickly took form as a political issue, with many members of the French public condemning the funding of the installation.

At the inauguration of the installation, French President Emmanuel Macron referred to the conception of the project as “un rève fou” [a crazy dream], thanking Christo’s nephew Vladimir for helping to make it reality.
Taking two months to install, Christo’s team worked to realize his vision for the project. Every pleat and fold of the fabric are as the artist intended, as evidenced by his preparatory illustrations spanning from 1962 to 2019. Photos of these preparatory works, as well as additional projects of the artists both realized and not, can be accessed at their website.