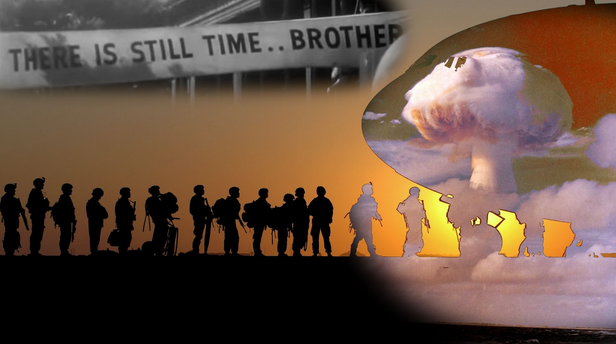 The U.S-backed proxy war in Ukraine is reaching its fevered boiling point. As Russia continues to strike devastating blows to Ukrainian infrastructure, the military posture of the U.S. and the North Atlantic Treaty Organization (NATO) has become increasingly escalatory in nature, threatening to drag the entire world into an all-out war between nuclear superpowers and setting the stage for global catastrophe.

Within the last few months, the U.S has upgraded its nuclear arsenal in Europe to enhance its tactical usability; sent an advance party of U.S. troops into Ukraine despite the real chance they might come under fire; conducted military exercises with NATO allies simulating a nuclear strike against Russia; ordered the infamous “screaming eagles” infantry unit to practice for direct war with Russia right on Ukraine’s border; and adapted it’s 2022 Nuclear Posture Strategy to include the use of “first strike” nuclear attacks if “all else fails,” despite President Biden’s promise to the contrary.

“This Ukraine crisis that we’re in right now, this is just the warm up,” Navy Admiral Charles Richard, commander of U.S. Strategic Command, said on Nov. 2 at a military conference. “The big one is coming. And it isn’t going to be very long before we’re going to get tested in ways that we haven’t been tested [for] a long time.”

The Cold War era levels of instability and existential danger that the situation poses were openly admitted to the public by Biden.

“[For the] first time since the Cuban missile crisis, we have a direct threat of the use [of a] nuclear weapon if, in fact, things continue down the path they are going,” Biden suddenly revealed while speaking at a fundraiser on Oct. 6.

Actually, tensions might be even worse now than at the height of the Cold War. One of the most important factors that allow rival powers to navigate diplomacy, avoid catastrophic military conflict and de-escalate national tensions is the ability to send clear signals through diplomatic channels and make credible commitments through treaties. The Anti-Ballistic Missile Treaty and Intermediate-range Nuclear Forces Treaty signed during the Cold War—which prevented the proliferation of nuclear arms capable of initiating a “preemptive strike” against rival weapon systems—were crucial to reversing the arms race between the U.S. and its rivals. These treaties have since withered away.

According to former President Barack Obama, even the ability to send clear signals to Russia has been degraded.

“The lines of communication between the U.S. and the Kremlin are probably as weak as they have been in a very long time,” Obama said in an Oct. 15 interview with the podcast Pod Save America.

While the reigning media establishment endlessly spins responsibility for the escalation of the conflict at the feet of rival powers, the U.S. remains the only country that has publicly published documents containing a strategy of nuclear warfare involving a “first strike” attack, not even requiring an attack on U.S. soil to initiate such a response.

“The danger inherent in Biden’s silence is that Putin and other Russian officials who are concerned about Russian national security must rely upon existing published U.S. nuclear doctrine,” wrote former United Nations weapons inspector Scott Ritter in an article titled Nuclear High Noon in Europe. “[A doctrine] which continues to enshrine a policy of nuclear pre-emption promulgated during the administration of President George W. Bush.”

“Under this doctrine, nuclear weapons are but another tool in the military’s toolbox,” Ritter continued. “To be used as and when needed, including occasions where the destruction of battlefield targets for the simple purpose of gaining an operational advantage is the objective.”

The current U.S. nuclear strategy also makes the trigger event for nuclear deployment intentionally ambiguous, something that can be traced back to the policies of former President Richard Nixon. During his presidency, Nixon created the so-called “madman theory,” which posits that by making the circumstances for nuclear armageddon ambiguous, it can create deterrence to non-nuclear military operations that go against the policy interests of the U.S.

The madman theory has survived to the present day and taken the form of our current nuclear posture. Indeed, all of the dangers that were present during the Cold War either exist today or have been amplified to greater degrees—just with none of the existential sobriety, awe-abiding horror and anti-war sentiment that accompanied the end of World War II and the destruction of Hiroshima and Nagasaki.

Even worse, the military industrial complex—including its think tanks, military contractors, high-ranking officers and politicians—has become more and more willing to adopt a strategic position that quite earnestly describes nuclear war as something that can be won. Unmistakably, this idea is egregiously dangerous and utterly divorced from the widely acknowledged futility of using nuclear weaponry of any caliber in any situation, as the fallout from even a limited engagement could plunge the world into nuclear darkness.

Yet, According to an article titled “U.S. defense to its workforce: Nuclear war can be won” published in the Bulletin, military-affiliated policy leaders continue to do so “in a voice that is influential, respected, well-funded and treated with deference.”

“The U.S. defense leadership’s methodical messaging to its workforce helps shape the views of this massive, multi-sector constituency that includes advocates, future leaders and decision-makers,” the article reads. ”It advances a view of nuclear weapon policies that intensifies and accelerates the new nuclear arms race forming between the United States, China and Russia.”

So thick is the fog of war promulgated by our intelligence–captured media that any talk about the human race’s final destiny before the towering, irreversible doors of mutual armageddon has been relegated to a side note of the Ukraine conflict, sanitized of all our possible involvements and placed as the feet of tyrannical mustache twirling Russians. Russia, at least, has made it clear that they have zero intention or need to resort to nuclear weapons in the Ukraine conflict, and China leaders have recently reiterated the mantra that “nuclear war cannot be won, and must not be fought.”

Unfortunately, the U.S. and its allies in NATO have continued to pursue the strategy of making veiled threats to its adversaries and providing uncertain pretexts for nuclear use. Recently, Ukraine President Volodymyr Zelenskyy was forced to backtrack after requesting the international community undertake “preventative strikes, preventive action” against Russia’s nuclear capacity. NATO Secretary General Jens Stoltenberg recently announced that “Russia’s victory in the war against Ukraine will be a defeat of NATO,” before adding the open-ended statement, “This cannot be allowed,” right before announcing that his organization would continue its nuclear drills as planned.

Further, U.S. military insiders are now calling for a joint-led “coalition of the willing,” or a NATO-comprised military force similar to the one created for the war in Iraq, to be conscripted for military operations in Ukraine. This would mean an outright war between NATO forces and Russia amid the backdrop of nuclear proliferation and  “pre-emptive” nuclear strategy.

To top it all off, these policies that are stoking the flames of war and potentiating nuclear disaster also enjoy broad bipartisan support among both major U.S. parties, with Democrats and Republicans sending $54 billion dollars to Ukraine completely unopposed over the last eight months alone. The only form of resistance to date was one letter written by the progressive caucus that tepidly called for more diplomacy just before the elections, a letter that was retracted within 24 hours of being published.

“Both major parties are committed to empire at all costs,” MIT graduate, anti-war activist and congressional candidate Geoff Young said in an online interview. “They all will engage in aggression, they’ll overthrow governments at the drop of a hat, just because they can. There’s no disagreement about imperialism. And that’s why they’re there.”

“The problem is we’re on the brink of World War III,” Young continued. ”[I’d actually] say it’s already started. Sometime between 2014 when the U.S. overthrew the government of Ukraine and started filling the entire country with weapons, training the Ukrainian army and Nazi militias [and now].”

“The other side of it is Taiwan and China, where we’ve got Congress people visiting Taiwan  despite all of these serious warnings from the Chinese government saying, ‘Look, if you do this, we are going to be at war with you.’” Young added. “They actually warned us. You know, most of these diplomats are kind of subtle. They don’t say, ‘We’re going to get involved in a military conflict with the United States.’ That doesn’t happen very often, right?”

When the conversation turned to the possible fall of U.S. hegemony, with the global community rejecting the U.S. dollar as a reserve currency in response to U.S. foreign policy and weaponized sanctions, Young agreed that it was likely, ominously adding “I just don’t want the U.S. to launch the nukes on our way down.”

Given NATO’s strategic hardlines that place the Ukraine conflict as a “must-win scenario,” their willingness to pursue nuclear engagement over small ground-based military engagements and the unfettered nuclear proliferation and technology arms race that makes “first strikes” appealing, any conflict between Russian forces and NATO troops could easily trigger an apocalypse. Nuclear winter could be what draws the curtains shut on the theater of war we’ve allowed to develop.

During the Cold War, it was the unrelenting advocacy of anti-war activists that allowed necessary treaties, channels and precautions to be constructed and narrowly avoid nuclear war. This time the dangers are greater than ever, the politicians more delusional and foolhardy and the activists less visible to the public eye. It was a broad coalition across professions that allowed the first anti-proliferation movement to succeed; not only international lawyers, policymakers, technicians and public figures, but also filmmakers, poets, visionaries and artists.

Perhaps there is still a chance to emulate this movement and change the course we’re on.

Stanley Kramers 1959 film On the Beach depicted a future where the United States had “won” the nuclear war. The film follows the lives of U.S. soldiers, scientists and citizens as they cope with the slow realization that the radiation is spreading, their demise delayed but certain. The film ends with a final striking image of metropolis streets completely empty but for the specks of trash and paper gathered by the breeze, with a horn blaring as a banner once used by a religious assembly reads, “There is still time… brother.”