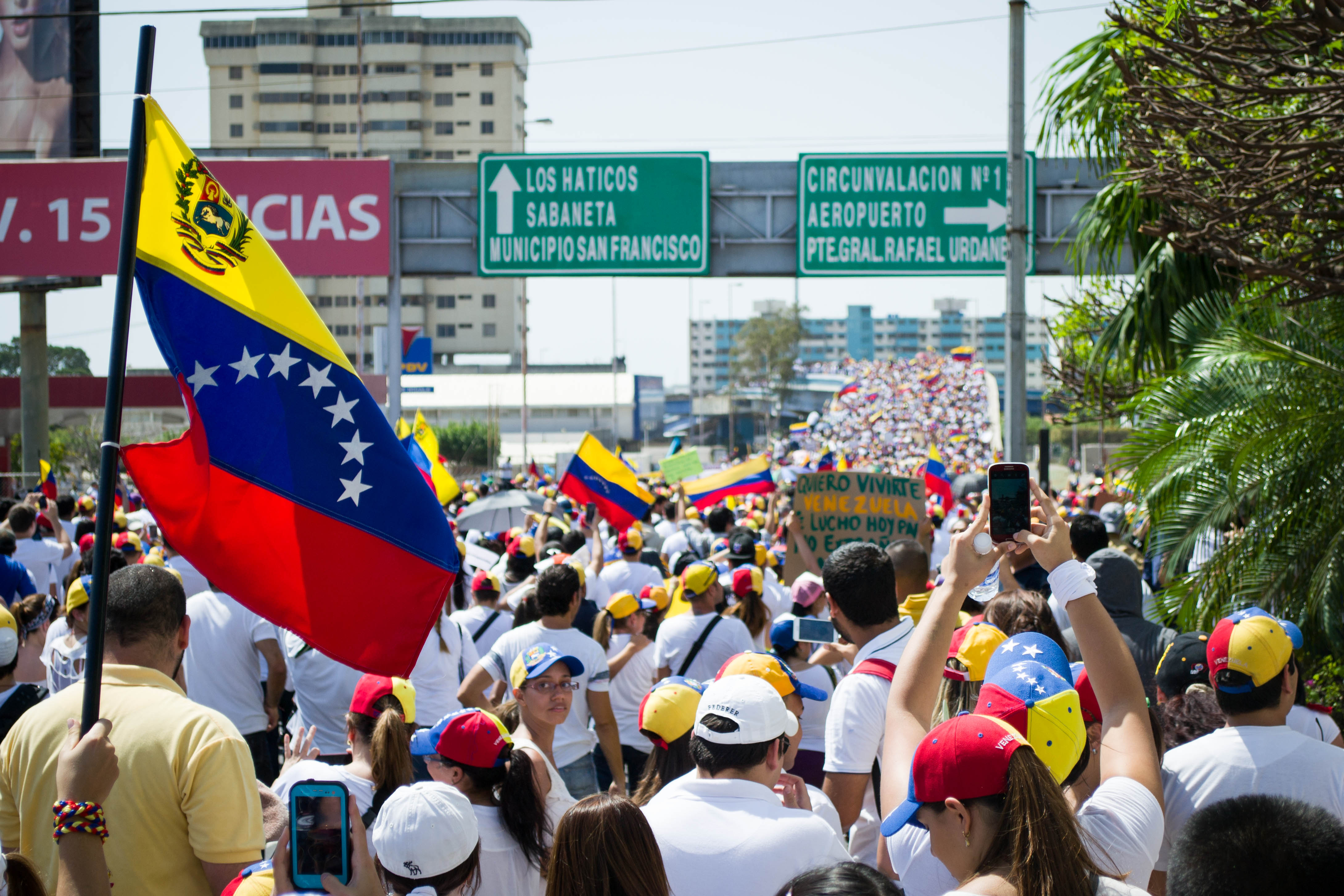 Photo courtesy of Wikimedia Commons Thousands of people took to the streets of Venezuela within the past month, capturing media attention worldwide.

Thousands of people took to the streets of Venezuela within the past month, capturing media attention worldwide. Most marched against what they see as President Nicolás Maduro’s authoritarian rule. This recent burst of opposition-led movements calls for Maduro to address the worsening political, economic and social climate in Venezuela, but was specifically prompted by what some see as a deliberate effort by Maduro to disrupt checks and balances within the government.

At the end of March, Venezuela’s Supreme Court of Justice nullified the ability of its National Assembly – the legislative branch of the government – to grant President Nicolás Maduro the ability to create joint oil ventures. Instead, the court declared it would be stepping in for the National Assembly. This comes after the overturning of numerous National Assembly decisions since their oppositional win in 2015.

Following that win, reports emerged with accusations of vote-buying in Amazonas state. As a result, the Supreme Court barred the four legislators from Amazonas while an investigation took place. Since then, the court has assumed that the National Assembly is in contempt of court for failing to carry out their legislative duties. The Supreme Court’s actions are nothing new. According to Venezuelanalysis, the National Assembly has not been able to exercise complete control since January of 2016. The only difference this time, concerning the news from March, is that the judicial branch declared that they will be standing in for the National Assembly until the issue is resolved.

The Supreme Court reversed its ruling three days later, but the month since has been marked by anti-government, opposition led demonstrations that have left at least 32 people dead and many more injured. Venezuelanalysis estimates that nine of the recent deaths have been caused by anti-government groups, five at the hands of state security and the rest caused by accidents.

The initial protests had several different purposes: to march against record food shortages, rising unemployment, high inflation rates, the suspension of elections, to convince the government to re-establish the separation of powers and to rally against the arrests of many protesters demanding these things.

Julio Borges, the President and opposition-leader of the National Assembly, has referred to Maduro as a dictator, accusing him of carrying out a ‘coup d’etat’, Reuters reports. In the same vein, other opposition leaders have joined him in calling for protests against what they see as Maduro’s creeping authoritarianism.

However, not all Venezuelans see this “creeping authoritarianism.” On April 27, hundreds of Chavista women rallied in Caracas to demand an end to the violent opposition protests.

“We Chavista women, we love our country, we meet here to reaffirm our commitment to the revolution and in defence of the peace of our people, and we strongly reject the violence generated in recent days by violent right-wing groups,” Mirian Lopez, rally-goer, said in an interview with Venezuelanalysis.

When Maduro was elected in 2013 after the death of former President Hugo Chávez, he assumed the role of leader of the chavista political movement’s United Socialist Party of Venezuela (PSUV). Some sources credit Chávez for leading the Bolivarian Revolution and transforming the economy by providing free education, health care and better conditions for lower income Venezuelans.

The Washington Post, however, reports that Maduro inherited an economic crisis because of Chávez’s economic policies, such as “using P.D.V.S.A.’s [the state’s oil company’s] revenues to pay for generous social welfare benefits that won votes, failing to save for more difficult times, and discouraging private industry that could have diversified the nation’s economic base.”

“The capacity of the Venezuelan state to provide for its poor comes from the capacity of the Venezuelan state to create profit from the petroleum that has been nationalized,” Sarah Hernandez, professor of sociology, said, echoing the use of P.D.V.S.A. profits for social benefits. “High oil prices, making more money from selling petroleum internationally, […] is used to provide housing to the poor, provide healthcare, provide a wide variety of programs.”

However, Professor Hernandez also addressed the point in the Washington Post’s quote about how some believe that those profits and benefits were only used to win votes.

“Some people would see [these benefits] as being carefully planned, to gain the favor of particular groups of people,” she said. “So it’s seen as, okay the money is not being used for the middle classes, […] they’re being used to help the very poor and only certain neighborhoods so that the government maintains, basically, their base support.”

Despite differing opinions regarding Venezuela’s economic condition, most sources agree that the nation is currently experiencing a crisis.

“Maduro has made almost no observable effort over the past year to tackle the roots of Venezuela’s most pressing issues, such as the economy, crime and corruption, and the government appears to have no clear roadmap out of the current political/economic crisis, let alone any obvious plans for advancing with the revolution,” a contributor for Venezuelanalysis reported in an op-ed.

The above quoted remark about the current political and economic crisis is likely referring to soaring inflation rates, unemployment rates, poverty rates and shortages of food and medicine. Unemployment is set to surpass 25 percent and inflation rates are expected to reach 720 percent this year. CNN reported data from a national study conducted by three Venezuelan universities that found that the percentage of respondents eating two or fewer meals per day tripled from 2015 to 2016, from 11.3 percent to 32.5 percent, respectively. The Venezuelan Health Observatory, a research site at the Central University of Venezuela in Caracas, estimates that less than 10 percent of operating rooms, emergency rooms and intensive care units are fully operational.

Professor Hernandez recognizes that Maduro is serving in a different historical moment than Chávez did, and thinks that Maduro needs to recognize that the state can no longer provide in the ways that it used to when oil prices were still high.

“They have to rethink the economic policy, and in my personal opinion, I think the problem is that they did not have the flexibility to do that,” Professor Hernandez said. “They stayed the course and that has created a whole set of serious problems within. […] The cost of foreign goods have become more expensive, so to produce anything national becomes more expensive, so the overall economy becomes less affordable and a growing number of people are unable to buy things.”

Growing up in both Caracas and Valencia, these problems strike close to home for third-year Eugenia Quintanilla. After her mother received death threats for protesting and publicly speaking out against Chávez, her and her mother were eventually granted political asylum, leaving her dad and extended family in Venezuela.

“I think seeing the place that I grew up in ravaged by violence on such a large scale is frustrating and I want everyone to know what’s going on and be aware,” Quintanilla said. “The food shortages and medicine shortages are especially what frustrates me the most.”

The political, economic and social climate of Venezuela is complex, just like any other nation. The current conditions in Venezuela are largely reported on, but the reasons why, and who is to blame, are greatly contested. For a broad understanding of what is happening in Venezuela, look to multiple news sources, not just Western media.

“We have had a very long history of U.S. intervention throughout Latin America,” Professor Hernandez said. “So we look at the world from a particular, I would say, it’s not even from the self-interest of the general population of the U.S., but the self-interest of the business sector of the U.S., that then pushes the American population to see the world from a very particular angle.”

Information for this article was gathered from venezuelanalysis.com, theguardian.com, mic.com, pbs.org, reuters.com, cnn.com, and the washingtonpost.com.