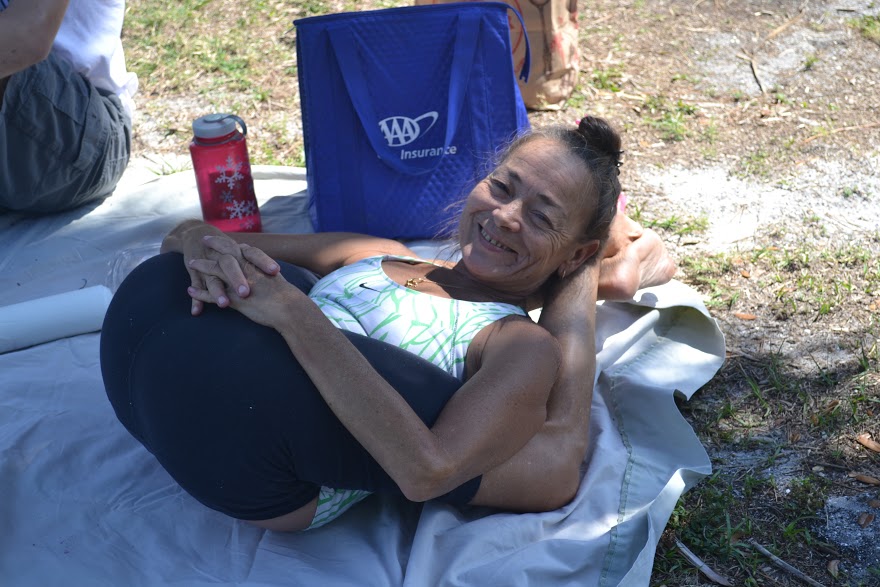 You can find yoga instructor Helen C. Kesler (‘79) on Z green or in the aerobics room in the Fitness Center with a group of students hanging on her every word for an hour and a half several times a week. Kesler took her first ever professional yoga class during her first week at New College in the Fishbowl, what is now called the Black Box Theatre (BBT). “At the end of the class, the teacher came up to me and asked if I was a teacher,” Kesler said. “And I said that this was my very first yoga class that I had taken in my entire life. And he just freaked out and he invited me to be in a yoga study group that he had at his house. It was three other yoga teachers and me and I was the youngest one by twenty years. We met before sunrise every day for six months. I would leave in the dark and go to yoga and, by the time it was over, the sun would be up and I would come back to New College and people would be having breakfast.” When I was ten years old, I was competing with boys and climbing trees and I was higher than they were in the tree and I fell and I really hurt my back. But my parents didn’t want me competing with boys and climbing trees so I had to lie to them and hide my injury so, when they  were around, I didn’t limp but, as soon as they were gone, I would limp. I limped to the library, to the card catalog and I looked up back, because my back was hurting, and I looked up all the call numbers and there were so many choices that there seemed to be a lot of books with the same similar number. I went to that stack and I stood in front of a stack and looked through the whole stack and I found my first yoga book ever. Of all the yoga books on the stack, I chose Richard Hittleman’s “An Introduction to Yoga” because it was paperback and it was tiny and it was thin and it had a table of contents divided into back, stomach, arms, legs and neck. I went to the back chapter and there were four asanas and I did those four asanas in the morning and in the evening. And within a week, my back pain was gone. I had an epiphany that all you had to do was go to the library, and you could get a book and do anything you want. You can change your life, you can change your body and you can change anything. Then I did all the other chapters in the book, all the other books in the shelf and I made a deal with my dad to drive me to every library within an hour and a half of my house in all directions and I devoured every little yoga book I could find. That happened until I was 18 years old and I met my first live other person who did yoga.

My favorite memory was Peggy Bates. She was my thesis sponsor and first court was named after her. She was the Provost and interim president at one time, she was also head of Social Sciences.

I studied international affairs and political philosophy with Peggy Bates. I wrote a multidisciplinary thesis on transnationalism and nonviolent resistance. I also practice massage and, to me, the practice of massage is the reification of nonviolence and, to me, yoga is also a practice of nonviolence. I feel particularly lucky because my work and my play and my identity and my life are all integrated. They’re all the same thing so I don’t have to put on a different hat at any point in my life, I can just be me wherever I go. I feel very lucky because I feel as if there are very few people who have an existence that is totally integrated. [Writer’s note: Kesler’s thesis, “Transnationalism, Nonviolent Resistance, and the Individual” is listed on the school website’s list of Senior Thesis Projects in International and Library Studies. It can be found in the archives at the Jane Bancroft Cook Library.]

It was pretty much that that reevaluation occurred when I lost both my parents. I kind of flipped a weave and went into a different direction. I also kind of had perfected the persona that I had developed, I felt as if I really worked really well and I was satisfied so I was moving onto greener pastures.

Since I was 18. I started teaching aerobics here, yoga was still my secret favorite thing to do. I really came back to teaching yoga at New College when yoga became really popular and I realized how so many of the classes fell short. The new yoga is an abridged version of yoga and I felt like there was a need for me to come back and share my knowledge with people because it was an old-school approach to yoga.

The naked swimming pool – we used to have naked swimming pool nights and then it became topless or optional topless and then we had to keep our tops on. When I was in school, there was no fitness center and there was no fence around the pool. None of these dorms existed and there was a big green yard when you would walk out to the pool so we would have pool parties at one in the morning,  we would have 25 people in the pool at night and we had two diving boards at one time.

Play with plants. There is a place in Sarasota called Crowley Nursery, it’s at the east end of Fruitville Road and it’s kind of on the border of Myakka. It’s owned by a family and is a family-owned plant retail place and they have five greenhouses. Two greenhouses have all varieties of palms, they have a whole group of edible plants and bushes, it’s just a really nice fun place to make a picnic lunch and go out and spend the day.

I think I was fortunate to be introduced to yoga so young. I had the opportunity to allow the

principles of yoga to inform my development whereas most people are introduced to yoga as an adult or as a late teenager where a lot of the developing has already been done. I was lucky to learn it early and it, in some way, reflected on my development and helped form my development and I think, more than that, I think yoga taught me that it all comes down to the breath. And that breath is really important, not only to yoga work, but to any kind of human work. In yoga we say that if there is no breath then there is no life. That’s irrefutable.

Everything. I think yoga is the most beautiful gift in the world and, not only will it help you with your body in terms of flexibility and strength and stamina, but it helps you emotionally, teaches you patience, it helps with the developmental process. In my head, I have a book to write in the future: yoga as a metaphor for life. Almost everything in life you can find an example in yoga that will resonate for you. I’ve devoted my life to yoga because I think it’s the very best gift I can give to the planet. Other people might be suited for other gifts but I am very well suited to give this gift. You’ve been practicing yoga since you were 10 years old. Do you think you’ll ever stop?

No. For me, life is a series of experiments and I had an experiment when I was 10 that there were certain asanas that I could do and if I did them every day then there is no reason why I can’t do them when I am a hundred. I’m halfway through on my experiment now and, as I get older, there are more and more things that I can do. The problem with most people is that they stop doing things so, when you stop doing it, you lose it. But when you keep doing it, there is no reason why you shouldn’t be able to within certain limitations. Yoga is cool because the longer you stay with it, you become more able to do cool things. […] That’s how life is, nobody gets it all at either end, there is always the tradeoff. Yoga teaches you that.