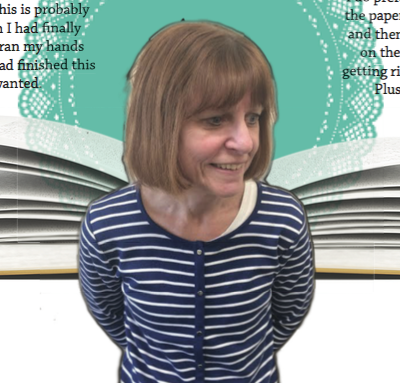 Caroline Reed has been awarded the Florida Library Association’s Leader of the Year award. A  brief chat with Cook Library’s social sciences librarian.

This interview has been edited and condensed for clarity.

You were a social worker before becoming a librarian. How do these two careers compare?

Social work is not so different from librarianship. What happens is people come to you with a need, and you provide them with resources so that they can then help themselves. Well it’s a very similar thing in librarianship. You have people who have a research project or something that they’re interested in and so they will come to us with that question and we provide those resources for them.

What is a common mistake you see students make throughout the research process?

Sometimes it’s looking for too much material. There’s so much that’s available and they become overwhelmed with what they find. Very often they’re not quite sure what search strategies to employ so they’re using lots of keywords. One of the things that librarians can do is to give them kind of a controlled vocabulary. They might be finding some very old materials – but how do you sort that out so that you can find new materials? If you’re doing something that’s historical then of course you want those older materials, but if you’re working on a contemporary issue and you’re finding things from the 60s and 70s, we can help you to sort through that. Maybe one of the other common mistakes I see students doing is perhaps struggling a bit too much. And that’s when librarians usually can help.

How can students become better researchers?

I think ways that students can become better researchers is to use the tools that are available to them. Now we have the QRC, the Writing Resource Center, the Language Resource Center and of course the librarians so I think using some of those resources really helps. Also there are lots of tools available for students to use. Things like using a citation manager for all of their materials – so using something like RefWorks or Zotero can really help people become very organized. If they’re not familiar with a citation style, Purdue Owl is such a great resource that they can go to. Also, not to be afraid of getting things from other libraries because now they come so quickly. I think not settling for something that’s available makes students better researchers. And basically, they can become better researchers by really asking questions and asking for that assistance.

When you go to a library, do you look at it through different eyes? Do you pick up on things a non-librarian might not notice?

I probably do because you’re always noticing what’s different about that library compared to your own. I do tend to look around a lot to see where people are sitting, what are they doing in that library. I look at the placement of things – are things easily accessible for people. I also go on to library websites to see what databases they have available to them. This is probably a little aside but I remember when I was working on my library degree, when I had finally finished it, one of the first things I did was go to the public library and I just ran my hands over a section of the fiction books because I was so delighted that now that I had finished this degree I realized that I could just read anything for enjoyment that I wanted to.

How have things changed throughout your 20 years at New College?

In the library, electronic sources have pretty much revolutionized how we do things. When I first came here we had about 60 databases and we had old wise terminals, which were basically text on a screen. It was green writing on a screen. You didn’t have computers that had a mouse. Everything was text and so you didn’t have things like pdfs of articles or remote access, so you had to still come to the library. You’d find what you needed, and then you had dot matrix printers, so it was a very different way to do things. For things like citing in APA style, you actually had to count the paragraphs if you were quoting or paraphrasing something. You had to go through in that electronic copy of that article so that somebody would be able to go back and find what you were quoting because it didn’t have page numbers, it was just one long article. Another thing that has changed is the way that we do things like interlibrary loan. The fact that we have UBorrow to connect all the state libraries, its just amazing how quickly we can get things for people. But also, for things like our journals, we joined a system called rapid Ill, and we had no idea how rapid it really was, s sometimes we can get a pdf in less than 24 hours. That’s so different from the days when we had to locate a library that had the journal, they had to photocopy it and mail that copy.

Is there something about the JBC library or librarians that might surprise readers?

Maybe that we have lives outside the library (laughs). We have people who serve on community boards. We have people who have large family commitments, who are organizing large events within their community. As an example, we have one librarian who has been involved in the St. Pete Science Festival as their co-chair for a number of years. We have a librarian who is now working with faculty and students to start an open access journal. I serve on the board for the Time Sifters Archaeological Society and that really fits in with my social science background. I think if I had gone into any other area it probably would’ve been anthropology. It’s always been a personal interest of mine.

What is your stance on the banning of books?

For the most part books aren’t really banned, they’re really challenged. Very often what happens is someone will object to either the content or the author. Many times what’ll happen is that the book is not actually removed from the library but it might be moved to a different section of the library. Many of the books that are challenged are in the children’s department. People will really look at those and scrutinize them. What might happens is that the book might move from the children’s department to the adult section of the library, because libraries really aren’t about not making things available to people. You don’t really have that as an occurrence in academia – I’m not saying that that doesn’t happen but you don’t necessarily have that prevalence of that happening in academic libraries. One of the things we’ve done with the Florida Library Association and the Intellectual Freedom Committee is we’ve created a book challenge form so that as people learn about challenges that are happening we can record that information and have that as a historical record. One of the things we’re doing at the conference this year is  a Banned Book Reading. So many of the people on the committee are going to be reading from banned or challenged books as people are walking by. There’s recently been a challenge of four books in the Collier County school system, so we’ve made sure that those books are included in this reading.

Ebooks. How do you feel about them?

I think that it’s just wonderful that we have a whole different venue for books. I love the fact that you have things that were in the public domain. I really encourage students to use our electronic books. We have some wonderful subject encyclopedias. We have been purchasing a lot of electronic books.  You’re no longer tied to the library and that one copy. I don’t necessarily read ebooks for pleasure but I just haven’t gotten into it. That’s sort of the world that I live in, but part of it is maybe not having the best iPhone. But in terms of research and helping students with research I absolutely love that we can access something electronically.

Hardcover or paperback? Why?

I do prefer paperbacks. One, they’re so much easier to carry around. And two, the paperbacks usually have either the artwork or the illustration on the front and then you usually get a biography of the author or snippets of the reviews on the back. With hardcover, the dust jackets often end up falling off and getting ripped and all of that so I think you lose a little bit of that information. Plus, the fact that paperbacks are so much cheaper than hard copies.

What book do you think every New College student should read before graduating?

I really think that they should read “New College: the First Three Decades,” by Furman C. Arthur who worked at New College. I would love if people could read it in their first year here because it really is the history of the founding of New College. It’s so wonderful to know where the institution actually came from, and the school was very revolutionary at the time that it was established. I think that as New College students it would be a really important book for people to read. Oh, and we have copies in the library! You probably thought I was going to pick a piece of literature (laughs).