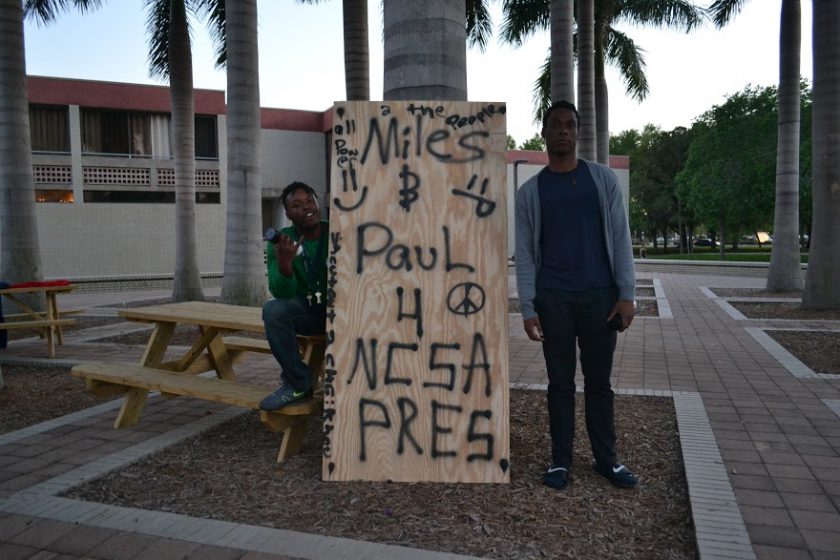 1.Where do you guys come from?

2. What kind of hobbies do you have?

P: I guess I also enjoy weightlifting and running.

3. How do you spend your time?

M: Putting in work! I’m an RA, I don’t get to have free time – unlocking ya’lls doors – nah. But If I’m not working, I’m doing my hobbies, when I’m not doing my hobbies, I’m either sleeping, thinking about the come up, or planning on the come up. It’s always a forward motion.

P: When I’m not working or studying for class, I’m usually spending leisure time with my friends, or cultivating my hobbies.

4. What do you like/love about NCF?

P: I like the happy-go-lucky attitude and I like how everybody can really just chill and be them and not be judged.

M: I like the openness of New College, everybody is totally receptive to lifestyles as long as nobody is hurting anybody.

P: My favorite memory is probably just like, my friend Antonio, going to his room in between classes and after classes and blasting music, sitting down at his computer just watching stuff and listening to music.

M: I think freestyle tutorial. I think it was good for me because, you know, it is something that you express as a hobby that New College allows you to be able to expand upon. Have fun with your craft but take it seriously to the point where you can do something without having to worry about all these separate implications.

6. So what would you guys change about NCF?

M: I definitely feel like it can be a more accessible culture, just in terms of like opening up and accepting, you know, that New College is what it is, but that there are going to be some people outside of that sphere – and that’s OK. We’re all here for the same reason, which is a dope education.

7. So what do you guys aim to accomplish as Co-Presidents, do you two have a platform or something?

P: I mean, he mentioned accessibility, but you know, we just want to fix a lot of things that are obviously broken. Like ADA accessibility, we want to get up to date with that, and campus climate has been kind of under attack since we got here, and we just want to address that. Our platform is based on, essentially, in my opinion, addressing campus climate through different facets, such as everyone feeling included by having equal access to shared spaces and private spaces, ADA and diversity initiatives, and one thing we explored was outdoor spaces, because they are a great conduit for community.

8. What do you think will be the biggest obstacles you guys will have to face?

M: Red tape, just in general, us trying to do things or get stuff accomplished that, you know, whether something is by law or by policy that’s something we won’t be able to do just for the sake of Rick Scott. But ultimately, I think if we can, you know we ran on theory plus practice, where if we can show our theory, and then institute it at New College, and just show to upper administration that things you want to do are not only beneficial to the institution but also the student body, and that everything’s possible.

P: I would say navigating institutional bureaucracy. You know, we didn’t have a lot of these ideas first, there are a lot of people who have had opinions about this campus – our predecessors – and the thing is, if it was easy, it would have been done already. So yeah, just navigating the bureaucracy, I think.

9. How were the Midnight Debates?

M: I mean, you could quote me saying “it was a hot mess,” but I mean, I am pretty sure it is supposed to have some semblance of hot mess every time, but it is what it is.

P: Yeah, it was pretty bad.

M: It didn’t even end, it just kind of disseminated.

10. What do you aim to become in the future?

P: I don’t have any clear goals for the future, but there is a quote from this rap song that I really like that just kind of epitomizes my approach to the future: “Develop yourself and let the universe respond” and I don’t know, but I feel like as long as you put positivity into the universe, then you’ll receive positive things, and I just hope to continue affecting positive change.

M: I can only hope to really be myself wholeheartedly, so I am just going to keep working and making sure that myself is someone who does a whole lot of good for society, and representing people in a way that they previously never had or were able to achieve. When I think about when people say “what do you want to be in the future?” I don’t necessarily think career path, I think – you know, this is the United States, if I really wanted to make money there are a million different ways I could do that – but it is more about who I really want to be and represent, and who do I want to help?