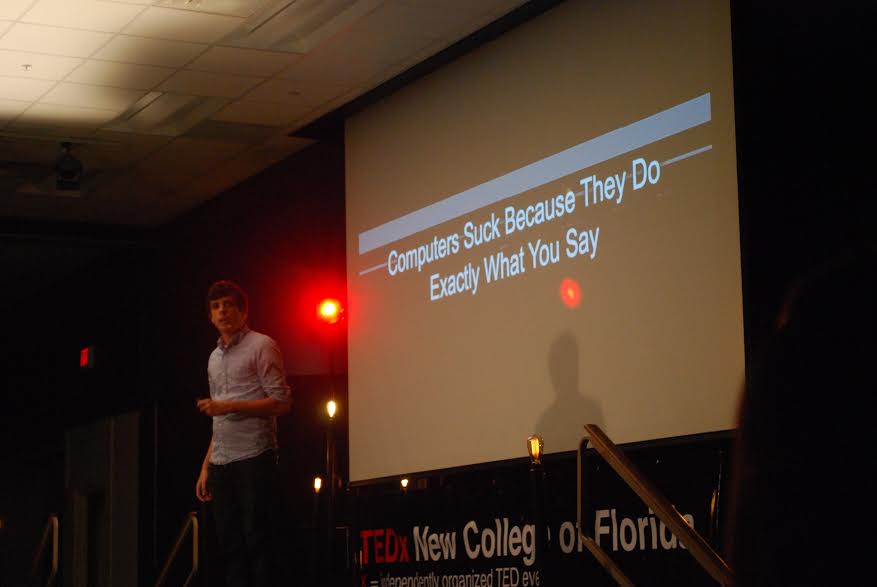 Balloon animals. A smashed lightbulb. Virtual reality. A dozen unique talks on the intersection of art and technology.

TEDxNewCollege was the thesis project of Heath Hawkins, who was interested in exploring the innovative ideas of New College students and our extended community.

Hawkins had been brainstorming an event like this since last May after being disappointed by the lack of innovative opportunities of this nature upon transferring to nEW College in the fall of 2014.

This year, as part of a thesis and specialized AOC in Creative Technologies, TEDx was able to become a reality. Hawkins, along with first-years Ximena Pedroza and Carolyn Beer, did the core of the planning for the event.

“You have to do this insanely long application process, wait eight weeks and if you’re lucky you get a license,” Hawkins explained. “That was one of the harder parts. From there, they give you a guide but it’s very vague… basically I just commissioned the two people who were really committed and we just did everything.”

TEDx received no funding from the school. Hawkins instead had to seek donations from various people associated with New College. Though they didn’t apply for Student Allocations Committee funding, Hawkins unsuccessfully sought out financial backing from President Donal O’Shea, Provost Stephen Miles, and other members of administration. One anonymous benefactor covered approximately 5/8ths of the cost, Hawkins estimated. The total amount raised, including ticket sales, was around $8,500. The event cost around $8000.

TEDx featured 12 talks from students, alums and individuals not affiliated with the school. Some were specifically invited to speak at TEDx, such as Futurist-in-Residence and guest lecturer at Ringling College, David Houle. Others were among the 30 people who applied for the opportunity to speak at the event. About half of those applicants were New College students. “We wanted a lot of Ringling applicants because ‘The Art of Technology’ is like a handout for Ringling students but surprisingly we got zero,” Hawkins said.

“It’s hard to say from my perspective because during the event I was a total stressball, but during the rehearsals I was just amazed by what the speakers were bringing, especially the younger speakers. The speakers that were the first-years were literally the ones that impressed me the most. They were the ones who had no ego about it and were looking the most to improve and that’s how they showed up. They did a fantastic job,” Hawkins said. “Dannie is hilarious, and Hayley is probably the smartest person I’ve ever met.”

Despite feeling like a “total stressball,” Hawkins maintained an enthusiastic demeanor throughout the event. When asked during the event how it felt to see TEDx happening, Hawkins responded with a “woo” and a kick in the air.

In a later interview Hawkins continued, “It was pretty amazing being student organized and having that result with the quality. The overall production was just pretty phenomenal.”

The event, which lasted from 6 p.m-10 p.m. on Saturday, April 16th, was a relatively glossy production by typical New College standards. Sudakoff Center was transformed into a dim but impressive space, featuring numerous professional videographers and people to execute the technological aspect of the event. There was copious free sushi, laminated name-tags for all, and even a few Oculus Rift Virtual Reality headsets. Two of these were hosted by EyeLoveVR, a Tampa-based company. They gave TEDx participants the chance to enter various immersive worlds through VR, with both visual and audio components. The other headset belonged to second-year Hunter Osking, who let participants see the Virtual Reality that he created, the focus of which was a wall of text featuring phrases such as “The Earth is flat.”

“TEDx was exactly what I expected. I thought the food was great, the community involvement was great, and I was really happy with a few of the talks,” first-year Volanta Peng said. “[Thesis student] Shelby Felder, my biological daughter, gave a fantastic talk on how raves are religious.”

“We have the HTC Vive and we’re basically just going to need a really high powered computer,” Hawkins added. “They have these things that you can put around the room and it senses you moving throughout the space… so it makes it fully immersive. Nearly no one has experienced it at this point so it’s very cool that we’ll be able to have that and start developing shit. So if anyone wants go to get their mind blown…”.

The current plan is to make TEDx a recurring event at New College. Hawkins hopes that the event will encourage students to do innovative, experimental things for their thesis or ISP during the school year with the opportunity to showcase it at the end of the year.