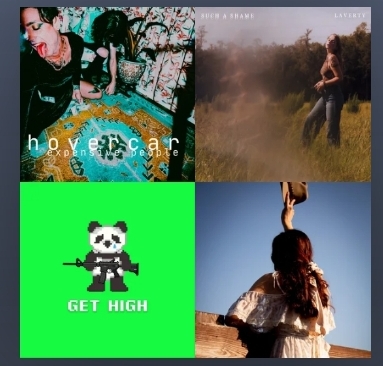 This edition of SYSH features music from artists local to the Southwest Florida area. A link to an extended playlist featuring more music like this can be found at the bottom of this article. Photo courtesy of Basil Pursley.

Sarasota is a very unassuming location—between beach-going tourists and snow birds just looking for nice weather, it may seem unlikely that there’s much culture to appeal to the average New College student.

But the eclectic, DIY sounds from local Sarasota artists prove otherwise—with interesting and unique jams across the indie spectrum, there’s certainly something to pique a Novo’s interest. And who knows, you might get a chance to see one of these bands live at the monthly Ringling Underground (given it doesn’t get unceremoniously canceled). This edition of Songs You Should Hear brings you a small sample of what the local music scene has to offer in Southwest Florida.

Directly from Sarasota and inspired by the grunge rock of the 90s, Hovercar is an explicitly queer rock band making music about gender, sex, drugs and rock and roll. “Euphoria/Dysphoria” from their self-titled debut album talks about the reconciliation between vanity and self-hatred. The lines “Euphoria, in love with myself; Dysphoria, doesn’t really help,” provides the allusion of an internal battle between wanting to love yourself when faced with the self-hatred dysphoria can often cause. “Know you’re not alone,” the song cries out, becoming a beacon for those who have felt similarly.

Today As A Human – P.M.Tiger

An American rock band from Clearwater, P.M.Tiger provides a more traditional indie sound with the song, “Today As A Human.” The song is filled with fun, bouncy repetitive lyrics. The song is a cheerful acceptance of life itself, that “today” the singer doesn’t mind that he’s human or that the day itself is a nuisance. The whole song radiates a kind of “why not” energy, why not live “Today As A Human.”

“Speak Easy is a band made up of four boys who love,” claims the band’s website. From St. Pete, Speak Easy delivers warm, energetic and jazzy beats—perfect for the background of a study session. “Moving Up/Breaking Through” is a song about writing a song, but it can apply to anyone trying to find the inspiration or beginnings of a new projects. It speaks to anyone who has struggled to make time for their passions, maybe this could be the encouragement to start penciling in that extra energy.

Can of Dried Blue Worms – The Tilt

The Tilt is a far more eclectic experience than the rest of the artists on this list. The Tilt instantly brings the listener to a small crowded house show, and it reeks of individuality and DIY energy. “Can of Dried Blue Worms” combines an odd jazzy melody with seemingly nonsensical lyrics about seeing if one’s “heart fits inside of a bread box.” The Tilt is a self described avant-pop band, and their music provides a fun and puzzling experience for the listener that will leave you trying to decipher the meaning behind the strange lyrical and instrumental choices.

Of course, for those craving more, here’s a Spotify playlist with more songs from these bands and others from South-West FL.