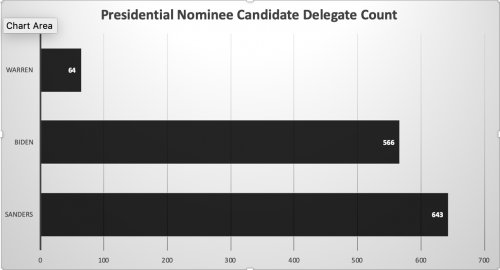 Super Tuesday was the tipping point for multiple candidates in the presidential race. Two leading candidates, Senator Elizabeth Warren and Mayor Michael Bloomberg, have dropped out. Bloomberg sent his support and resources to Vice President Joe Biden’s campaign. Senator Warren has yet to send support to either of the remaining candidates.

Massachusetts was a determining primary for Warren. Her home state was predicted to be a winning state for her, but this turned out to not be the case. Warren secured only 21 percent of the votes. This resulted in Warren receiving just 17 delegates from the state that she serves.

Sanders also experienced a surprise upset in Minnesota. Biden beat out Sanders by 10 whole points. Minnesota had polled extremely high with Sanders before Super Tuesday. However the losses in Minnesota and Massachusetts should not overshadow Sanders’ victory in California. The Senator from Vermont secured 33 percent of the votes from the largest state in Super Tuesday.

Biden claimed victory after Super Tuesday. Solid victories in Texas, Massachusetts and Minnesota gave Biden the lead going into the next set of primaries. Biden was predicted to win the southern states like Alabama and Tennessee. However his upsets in the northern states can be linked to events that happened before Super Tuesday.

Prior to Super Tuesday, Mayor Pete Butigieg and Senator Amy Klobuchar dropped out of the race and sent their support to the Biden campaign, reducing the moderate vote down to two candidates. This led to a significant boost in Biden’s numbers. At the same time this hurt Sanders’s campaign. Sanders previously benefited from a torn moderate vote. Now that Biden is the only remaining moderate candidate Sanders now faces a united moderate opposition.

Professor of Political Science Jack Reilly had this to say, “Why Bernie looked so strong a week ago was because no one really imagined that Buttigieg and Klobuchar would drop out. It was [strategic move] to drop out when they did, before Super Tuesday and throw their support as strongly behind Biden in a way that would coalesce with such a strong [Super Tuesday] victory to produce this wave in just the right way”.

There are some existing concerns with the Biden campaign that have long plagued his race. Biden has struggled to fundraise and primarily relied on large donors to fund his campaign. This problem may be solved by Bloomberg dropping out and supporting Biden. But the problems in the Biden campaign should not lead to voters underestimating him.

This in part is due to the recognition of his name. Biden has his history of being a senator for 40 years and vice-president to Barack Obama. This name recognition has made him an easy choice for moderate voters. This is something that previous candidates fought hard to obtain.

In the upcoming weeks voters will be tuning in to the debates. They will see only two candidates on the stage. These debates have played a major role in voter’s decisions. It will be a major change following a debate stage that previously had more than four candidates battling for air time.

When asked what his predictions were for the Democratic Nominee, Professor Reilly was hesitant to name a winner: “If you look at the forecast for the primary there, it’s hilariously jumping back and forth, they have been oversensitive because they’re essentially trying to predict what is a fundamentally and largely chaotic process.”