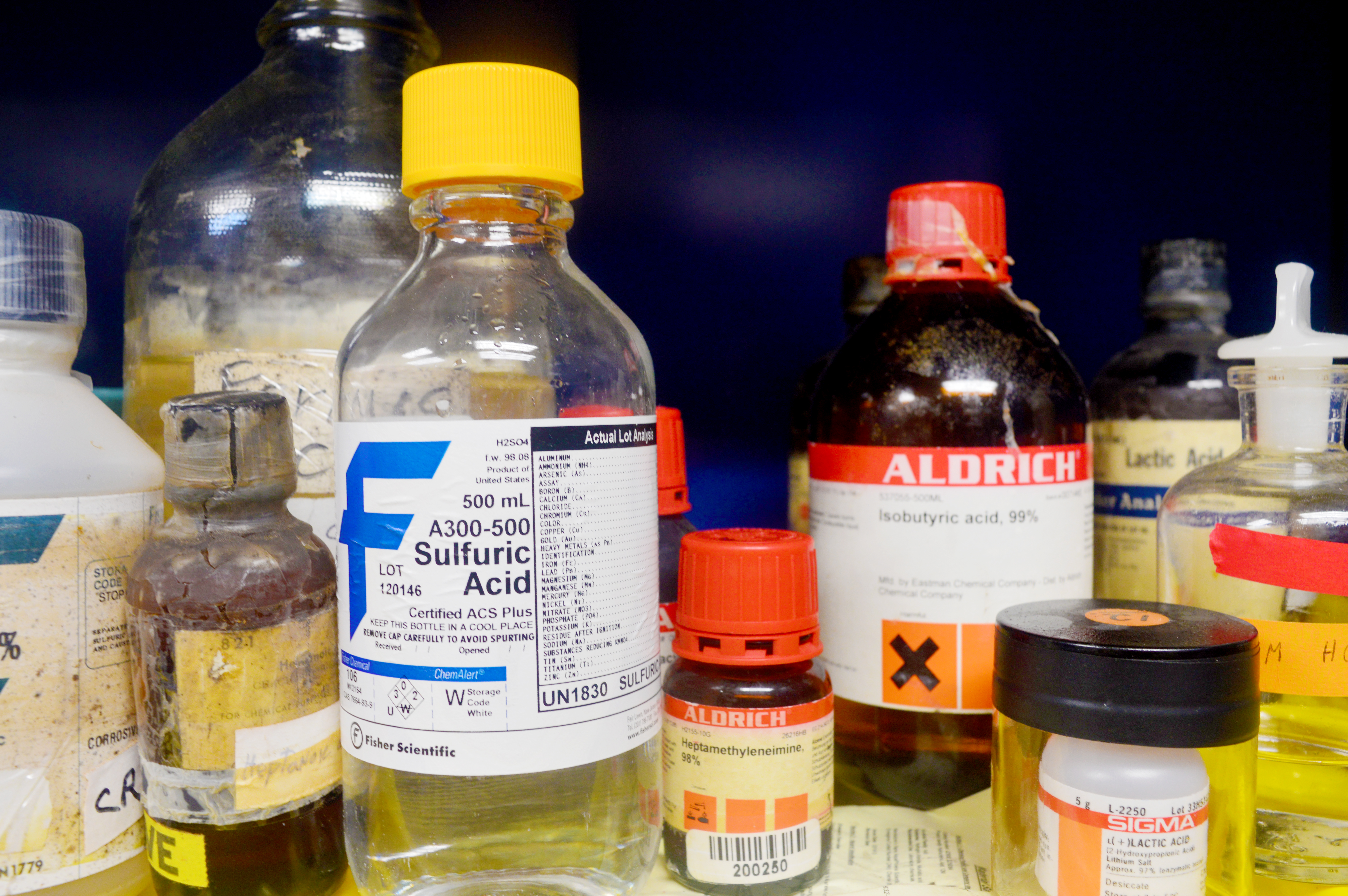 (Photo by Giulia Heyward/Catalyst)
Concentrate sulfuric acid (center) can be found in the chemistry storage room in the Heiser Natural Sciences building. The room is double bolted and only a select amount of faculty have the key into the room.

Sulfuric acid is a chemical capable of corroding paper, metal and human skin. It has the potential to cause blindness, and is unique in its ability to also cause thermal burns as a result of dehydration. This chemical can be found in household cleaning supplies, locked in the labs of the Heiser Natural Sciences building and, recently, unattended outside of Z Amphitheater.

“It’s the same situation with drugs and guns,” Natural Sciences Division Chair and Associate Professor of Biochemistry, Katherine Walstrom, said. “There are tons of dangerous things that people can get their hands on and do bad stuff with–these chemicals are one example.”

Yasmeen Wilson needed to get her aluminum Lemond road bike together.

The second-year transfer was one of two students in Associate Professor of Computer Science John Doucette’s Bike Building tutorial. In the tutorial, Wilson had been encouraged to consider making slight changes or modifications to the bikes she worked on.

“The tutorial is based around learning some practical and theoretical skills with bicycle repair,” Doucette said. “They needed to completely disassemble the bikes, break them down to their basic components, take apart the wheels and then rebuild everything from scratch. In the process of that, they might make more interesting alterations.”

“She [Wilson] came to talk to me, and seemed pretty excited about anodizing,” Doucette said. “It’s a pretty common thing that happens to, at least mass produced, bikes.”

Doucette states that he and Wilson had discussed the process of anodizing, using sulfuric acid. Doucette had then talked to Associate Professor of Physical Chemistry, Steven Shipman, about acquiring the acid.

“We had this strange sequences of communications,” Doucette said. “I talked to Yasmeen [Wilson] about making the safety plan and then, the next thing I heard, was that there had been acid in the dorms.”

The sulfuric acid was reportedly left unattended in the bathrooms in the Z Residential Building, closest to Z Amphitheatre.

Several emails were sent by Wilson to the [Forum], an optional Listserv that students have the ability to join upon enrolling into the school. The Listserv can be used for organizing rideshares, asking for faculty office hours or, in this case, asking for materials to anodize a bike.

Three emails were sent by Wilson on Nov. 13 asking for a big pot, baking soda and a final one announcing that there was sulfuric acid. The response from all three emails was nothing compared to the response to the email sent on Nov. 14 announcing that there were two buckets of diluted sulfuric acid left unattended by Z Amphitheatre. The acid had not been neutralized.

“I did not know about it, I learned from the forum and from people talking about it,” Second-year student and Z Resident Cabrini Austin said. “I didn’t really feel any type of way, honestly. I had an idea that it was Yasmeen [Wilson] because I knew that she was anodizing her bike–which I knew would need sulfuric acid.”

Wilson had watched YouTube videos, read articles and spoke to her tutorial sponsor about anodizing the bike. She had originally intended to purchase battery acid from a supply store containing 33 percent sulfuric acid. Doucette had recommended that she talk to Shipman.

According to Wilson, the anodizing process occurred at the Bike Shoppe. The bucket of sulfuric acid was left by Wilson at 6:30 a.m.

“I put it in the corner of Z Amp where nobody could see it,” Wilson said. “And then I went back to my room until Ham was open. I woke up during class time, which was at 10:30. I had planned to go earlier to Ham to get the baking soda but had slept in because I was up all night with [the sulfuric acid].”

Wilson had received a message on Facebook from a friend about drama on the [Forum] due to the email that she had sent.

“I took the baking soda [from Metz] to go neutralize it in Z and then it was gone,” Wilson said. “Everything was gone. I went upstairs to get my laptop and saw that I had an email from [Dean of Student Affairs] Mark Stier.”

Stier had explained to Wilson that the acid had been confiscated.

“After that, I read some of the forum stuff,” Wilson said. “It was just a bunch of nerdy ass Nat Sci kids jerkin’ themselves off.”

“Sulfuric acid is a very common chemical, it’s used in a lot of different chemical reactions,” Walstrom said. “There is a lab that we use to do in General Chemistry Lab that was an electrochem lab, where we used a dilute acid solution to conduct electricity. You can put thin layers of metal on other metals, for protecting it, so you can send an electric charge through the liquid and it can cause the metal to turn into the regular metal and stick to a surface. That’s what they were trying to do in this case.

“Anodizing metal is pretty common, especially aluminum,” Walstrom continued. “It’s usually done in an industrial setting. […] I can see how anodizing it can make a thinner coat of paint–but you can also just regulate the amount of paint you put on stuff too.”

According to Walstrom, the diluted sulfuric acid that was collected was shown to be relatively harmless.

“When Environmental Health and Safety collected the acid that was being used in this case, he [Ron Hambrick] said that the ph was less than one–which is a very low ph,” Walstrom said. “I don’t know if the sulfuric acid that the student was using would burn your skin, because it was diluted from the concentrate.”

While diluted sulfuric acid may not be volatile, the acid in concentrated form has the ability to burn skin and can be volatile. The school purchases all acids in a concentrated form, which are then kept in the Heiser Natural Sciences Labs. Associate Professor of Chemistry, Matthis Hodge, is in charge of all substances stored in the building.

According to Walstrom, while not recommended, the diluted sulfuric acid, when combined with the baking soda, could have been poured down the drain or onto grass, such as a compost bin.

Students who work in the chemistry labs are instructed on the proper safety procedures for using and disposing chemicals. Professors go over a safety checklist with students including different waste containers in the lab or wearing gloves and goggles. For each experiment, students are instructed to research the chemicals they will be using for that day in lab, including any volatile chemicals that should avoid skin or could cause eyes to tear. Thesising chemistry students must undergo online training from Environmental Health and Safety. Students also learn about neutralizing substances with sodium bicarbonate or baking soda.

“Baking soda is a base, and bases neutralize acids,” Walstrom said. “Baking soda is such an easy thing to buy, and it’s really cheap, and that’s why it’s a really great thing for neutralizing in this case.”

Baking soda is a common neutralizer due to its accessibility and cheapness. This makes it almost as common as potentially dangerous chemicals such as sulfuric acid.

“I think there was a misunderstanding somewhere about the safety procedures for using the acid,” Walstrom said. “All of the rules about selling chemicals are related to federal regulations. If the chemical isn’t that dangerous, there are fewer regulations. One reason sulfuric acid might be more easily obtainable is that it’s not a reactive chemical, it won’t blow up on you and it’s not poisonous. Things that are unstable or poisonous are regulated more carefully.”

Currently, a liter of sulfuric acid can be purchased on Amazon for $18.90–it is eligible for Amazon Prime.

“You might harm yourself,” Walstrom said. “But it’s not going to harm you. It’s not as dangerous as some of the other things that are more controlled.”

An email was sent by Stier that same day.

“We would like to help students do interesting projects,” Stier wrote. “However, for now we will not allow students to take any chemicals outside of Heiser. I’m sorry for the concern that this incident caused.”

Doucette plans to offer the tutorial again in the spring, although he does plan to offer some restrictions. In the event that a student plans on anodizing their bike, Doucette says that he will make sure that he is present to supervise the process.