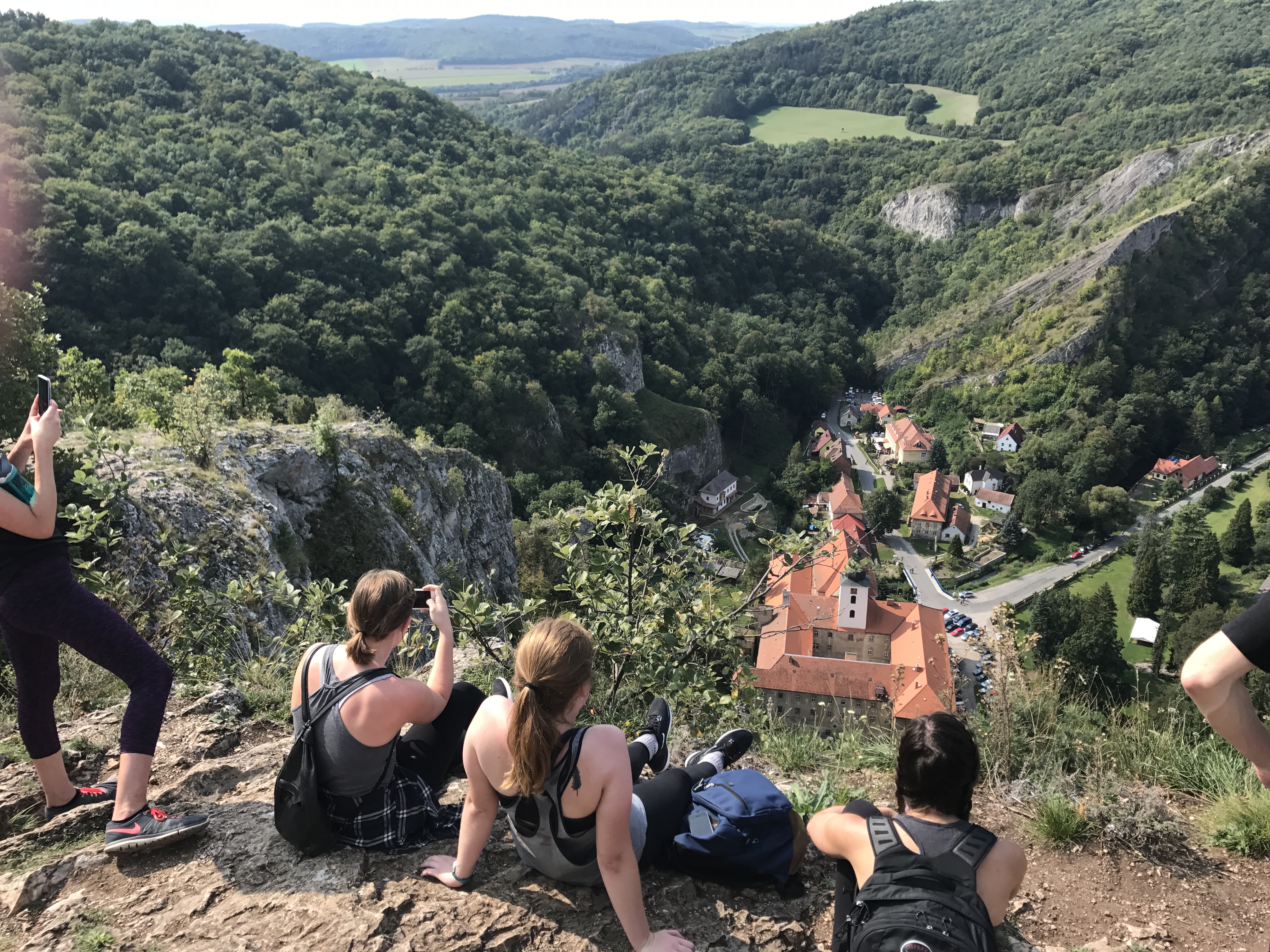 The village of Svaty Jan pod Skalou from the top of hill. (Photo courtesy of Cassie Manz)

At 8 a.m. the train station is buzzing with energy. People walk past with massive backpacks, looking like they know exactly where they’re going and where they need to be. Most of the time, I still feel lost and in the way, simultaneously. They all look much more adept at gracefully carrying 45 liters on their back than I imagine I do.

Luckily, on this Saturday morning–my first time at the train station–a program leader shepherds our bumbling group of clueless Americans to the platform. The train is not what I expect, but I was picturing the train Harry rides to Hogwarts School of Witchcraft and Wizardry, so in hindsight it’s not that surprising. The Czech countryside passes by outside the window, rolling green hills and tiny white houses with picturesque gardens and red-orange shingle roofs.

We get off at Beroun, a town 30 kilometers southwest of Prague. By now I’m a little more awake and it’s warm outside, a perfect fall day. I take off my sweater. Our program guide tells us that we will walk to the town of Svatý Jan pod Skalou, look at the cave and church that the town is known for, and then walk up a hill and look over the village. After the hike, we’ll have lunch. He says the walk up the hill is pretty steep and can be intense. I inwardly groan. My family’s version of hiking is driving to an overlook, taking pictures, and then getting back in the car.

After a beautiful and out-of-breath hike, we arrive in Svatý Jan pod Skalou. Our guide points to the staggering mountain (hill, if I’m being honest with myself) we’ll be climbing that reminds me of the gray and menacing mountain the Grinch lives on outside of Whoville.

Even though I’m convinced I won’t make it to the top, I do. The climb is worth it, and the view from the top is breathtaking. The small town of Svatý Jan pod Skalou is laid out before you like a picture from a storybook.

Svatý Jan pod Skalou, which translates to Saint John under Skala, is a quaint town with a population of 158 people. A centuries-old legend surrounds the village, cloaking it in mystery and a sense of credibility, some old-age, I’ve-been-here-for-a-while superiority. The first Czech Christian hermit Saint Ivan settled in a cave under the cliff in the middle of the ninth century. He lived alone for 42 years, his only companion a lamb sent to him by God. According to the legend, he withstood many temptations inside the cave. Eventually he wanted to leave but as he was about to do so John the Baptist appeared to him in a dream and gave him a wooden cross, with which the hermit chased out the demons in his cave. Saint Ivan remained in the cave for the rest of his life.

After the hermit died, Prince Bořivoj built the church as a memorial to John the Baptist. It was the hermit’s last wish because John the Baptist had protected him several times from the temptations of the devil. The current church we see today was built in 1661, on the site of the original. The sanctuary is built directly off of the cave, with a small wooden door that leads into the actual cave room where Saint Ivan lived, which visitors can enter. In a quartered-off area inside, there are two indents in the stone ground, said to be made by the saint’s knees, because he prayed there every day. In the center of the church is the tomb of Saint Ivan. A cross that used to stand on Charles Bridge, brought as a gift by pilgrims from Prague, hangs over the altar.

In 1517, Benedictine monks from Ostrov settled in the church and made it their monastery. In 1584, the monks discovered the remains of the hermit. This moment began the sacred pilgrimage which has continued up until this day. The Saint John Benedictine monastery has served as a labor camp, a prison and a school for the secret police during the Communist regime.

At lunch, I asked our guide if most people in the village believed the legend of the hermit in the cave. He said yes, that in fact, not only did they believe it, but they took great pride in the legend.

Outside the monastery, there is a healing spring with miraculous water that you can drink. We all take turns. I fill up my Nalgene bottle and carry on.