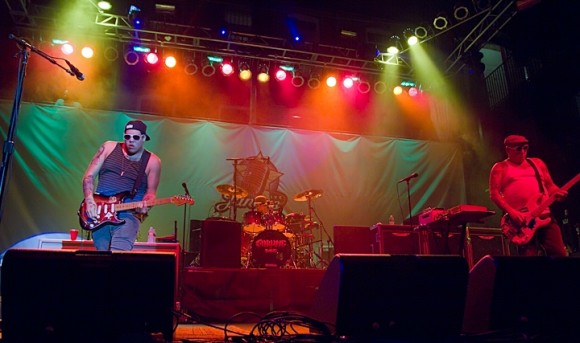 After legal controversy with Brad Nowell’s family, the band changed their name from Sublime to Sublime with Rome.

On Sunday, Oct. 24, Sublime with Rome shot heaven down for the dense crowd of Sublime fans at Jannus Live in St. Petersburg, performing a set rigged with the original band’s songs.

Without any introduction, the trio got onstage and hashed out “Date Rape,” further sparking up the already wacky crowd, who sang along with gusto. Other songs performed included “40 oz to Freedom,” “Don’t Push,” “New Thrash,” “Santeria,” “S.T.P.,” “Summertime” and “Wrong Way.” “Smoke Two Joints,” a popular favorite, resulted in several attendees hastening to obey. The venue’s security pushed through the swaying audience, but their attempts to weed out rule offenders were unfruitful.

The band played true to the sound of Sublime without adding twists to songs familiar and loved by fans. New band member Rome Ramirez, on vocals and guitar, impressively matched his singing inflections to those recorded by original frontman Bradley Nowell, but he failed to accomplish the punk rock bark and growl that Nowell mastered. If I closed my eyes and let imagination kick in, there were moments I could believe Nowell was onstage.

While the sound was energetic, the performance was mellow at best. Bassist Eric Wilson and drummer Floyd “Bud” Gaugh never said a word, while Ramirez only addressed fans a few times throughout the night, mostly to thank us for coming out and tell us how we were the best group they have played for yet. Rome was rooted in one spot throughout the show, exuding a humble vibe appropriate for those who acknowledge that this is not the real Sublime and that Rome was not singing his own lyrics. The band did, however, play their new song “Panic,” as well as tossing in a Bad Brains cover.

The crowd’s enthusiasm, at least, was chronic throughout the set. Mosh pits were attempted but  faded quickly as most of those present were overcome with a dazed awe at the sight on stage. The audience was one of the most diverse I have witnessed at a show of high-energy music: people old enough to have seen Sublime in concert, people young enough to think Sublime is the abbreviated name for Sublime with Rome and those in the middle such as myself — old enough to have heard Sublime on the radio as they gained national popularity in the early ’90s, but too young to have seen  them before the death of Nowell in 1996. For all of us, though, it was exhilarating to witness the potent mix of reggae, punk and hip-hop that defines Sublime’s music, a blend we never thought we would experience live (or experience live again) aside from tribute bands and covers.

After the set, the majority of the crowd continued applauding and hollering, unrelentingly jonesing for more. Long, loud minutes went by and it seemed the spirit of the night was cashed. But the band returned for another session, treating us to a stash of more Sublime favorites, beginning with their version of “Scarlet Begonias” and including “Badfish” and “What I Got.”

Sublime with Rome embarked on their first US tour on April 20. They have taken a few breaks to work on their debut album, expected next year. For the current fall tour, most of their shows have the Dirty Heads set as the opening act, though we at Jannus witnessed Lionize instead. Both bands are of a similar musical strain as Sublime, but the reggae beats of Lionize did not fully register in the set they played. Their performance was also weak, though frontman Nate Bergman communicated with the crowd far more often than Ramirez did. People closer to the stage cheered them on while those who stuck to the back of the joint for Lionize failed to give the band their full attention.

Being a large outdoor venue with smoking permitted and several bars, Jannus Live was ideal for the St. Petersburg show. Tickets were $42 at the gate, $35 in advance. Pricey, but when the frontman of one of your favorite bands is dead, you don’t want to risk losing out on a chance to see the remaining members. Two out of three is not a bad score and even Todd Foreman, who played saxophone on Sublime’s studio albums, performed.

Sublime with Rome gave the audience the fix we had come for: not a cover of Sublime, not a tribute band and of course not the original. They could not give us Nowell but no one came for a re-creation. We came to see and hear those who had once played with Nowell and get lit singing along with Rome, an outsider to the band like us. For catering to our cravings, the show earns a Sat.