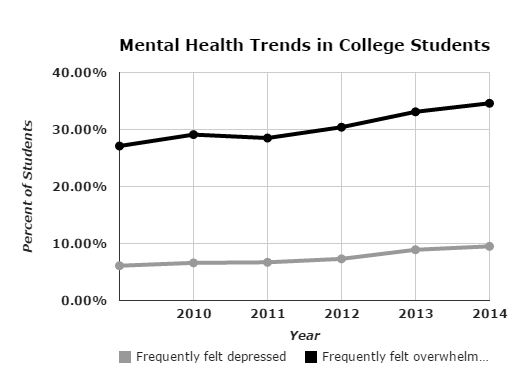 Emerging concern about the mental health of entering college students was reinforced this week by a survey demonstrating a sharp increase in students who reported feeling frequently depressed or overwhelmed. “The American Freshman: National Norms 2014” survey has provided experts with important research on how to deal with the changing faces on college campuses.

The survey, conducted by the Cooperative Institutional Research Program (CIRP) at the University of California, Los Angeles Higher Education Research Institute, has been a source of comprehensive data revealing trends and interests among recent high school graduates for fifty years. While it compiles data on matters as diverse as political views, partying and social networking, the survey has been of particular interest to experts in mental health. More than 150,000 students were polled around the United States.

Dr. Anne Fisher, director of the Counseling and Wellness Center (CWC), noted that stigma attached to mental illness has declined significantly in the last few years, especially among students at New College. “We don’t have the level of stigma here that might be at a different campus. I think this is a very enlightened student body,” Fisher noted. “I think the student culture is one that has been very supportive of counseling.”

“In national data, counseling centers serve about 10 to 15 percent of a student body,” Fisher said. “We’re well above the national average.” In last year’s data, the CWC saw 304 individual New College students for counseling, with an average of about eight sessions each.

“When I first got to New College [25 years ago], there were a lot more dramatic crises,” Fisher recalled. “Something would happen and all of third court would be in an uproar over a person or two. We don’t have that much anymore. I think what has changed is that students are more open to help. The last couple of years is the first time I’ve seen students walk other students over for a hospitalization.”

Respondents reporting that they frequently “felt depressed” rose from 6.1 percent in 2009 to 9.5 percent in 2014. Over the same five-year period, the percentage of students who “felt overwhelmed” by schoolwork and commitments grew from 27.1 to 34.6 percent.

These changes reflect the evolving expectations and responsibilities of college students. Mental health workers have noted that the modern college experience is much more stressful and demanding than before. As students juggle classes, part-time jobs and competitive internships, the time they have to spend on mental and emotional wellbeing is diminished.

“I think there’s more pressure to do well because increasingly there’s fewer jobs that allow for only a high school degree,” thesis student Angelica Alexander of the Mental Health Alliance said in an email interview. “I think it might be more stressful in part because a lot of schools don’t adequately prepare students for college. Many students were smart but coasted through their classes. Here, they’re ‘average’ and they have to develop new skills very quickly.”

Economic woes befall many graduating college students who attempt to find jobs while they pay off hefty college loans. “School costs are rising so rapidly,” Alexander said. “That’s a huge stressor. Also, the economy hasn’t been good which means it’s harder to find jobs and you can no longer pay for your education through a part-time job. There’s also more competition for even part-time jobs, like at fast food restaurants. Increased stress means higher chances of depression.”

For students with existing mental health issues or disabilities, the strains of college life are even more pronounced. “There’s a lack of support for existing mental health issues and learning disabilities, such as anxiety and ADHD,” Alexander said. “They might not be diagnosed until you reach college, and at that point you’re either already close to dropping out or just barely hanging on.”

As students’ needs change, mental health experts are tailoring therapy to suit a new generation. Options for online therapy have proven to be effective in treating anxiety. Therapist Assisted Online (TAO), a service provided by the CWC, allows students to utilize therapeutic resources directly from their personal computer. Along with a weekly video chat with a therapist, TAO offers daily exercises to alleviate anxiety. Fisher noted that these short, daily activities keep students committed to therapy for a short time every day, and they are more convenient and accessible than weekly therapist visits.

In the 2014 survey, students self-rated their emotional health at 50.7 percent, the lowest score in the history of the survey. According to the survey report, “Students with lower levels of emotional health wind up being less satisfied with college and struggle to develop a sense of belonging on campus, even after four years of college.” Lower emotional health scores also correlate with students missing classes more often, feeling more bored in class and engaging less with other students.

Information for this article was taken from ucla.edu, nytimes.com