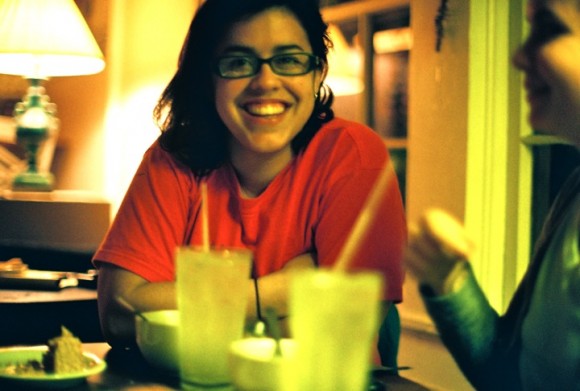 The Four Winds Café filled with narrators and narrative-appreciators alike last Wednesday night, the familiar furniture re-arranged into a circle conducive to storytelling and soul food eating as brave, funny, clever students perched above us in the storyteller’s stool and shared their tales. Put on by thesis students Matt Polzin and Cody Gunton, the event was imagined as an opportunity students coming together over food and share stories.

“We really wanted to throw an event and we were interested in doing something sort of dinner theatre style—good food and entertainment,” Polzin said of he and Gunton’s plan. While Gunton–called “quite a good cook” by his co-host, a compliment agreed upon by all at the end of the night—prepared the menu, Polzin came up with the creative element.

“I think it [storytelling] just popped in my head because it’s something I like to do and participate in…it’s a good way to break the ice between lots of different groups of people,” Polzin explained. Rozalyn Crews was the first ice-breaker, starting us off with a choice between three equally enticingly named stories: the naked man story, doughnuts and pot, or anime babes and videogames—the latter of which was chosen unanimously by the group; “We all have our own pot and doughnut stories.”

The first course of the soulful vegan meal then arrived, a broth spotted with tender turnips and swirled with dark greens, accompanied by quinoa cornbread drenched in honey, as Crews detailed a particularly strange and amusing couch surfing experience in Athens, Georgia; a night spent surrounded by life sized anime posters and insomniac gamers. As we broke our cornbread into our soup, David Belew followed with a traumatizing pet story. “I think animal companionship is important,” he explained as he gazed longingly at Crews petting her lovable old dog. Having spent his youth reading Where The Red Fern Grows, Belew felt he needed a college pet, and wound up satisfying his impossible dog dreams with a rat. Despite his dreams of becoming “the weird rat guy,” he eventually ended up being a rat-chaser as the pet turned to vermin in his eyes.

Adam — then took the stool and presented us with a choice between a story of a bird turning into a tree, lauded as four pages of literary beauty, or a story that ultimately led to him partaking of toilet water—the toilet story obviously won. This grew into a tale of beach drunkenness—a theme seemingly familiar to many Floridians—Adam and his companion getting ever more intoxicated and finally winding up in jail via “paddy-wagon,” alcohol-induced dehydration forcing poor Adam to drink out of the jail cell toilet.

All of us still laughing, Cody Gunton, co-host of the event, took over and began his tale of finals week at Reed College. Having spent a week studying obsessively along with the ambitious masses, Cody reached the last day of the semester pitifully unwashed, and after one last distraught night, he arrived late at the airport for his flight home only to be turned away by a disgusted flight attendant. Admonishing the poor student for his smell, he wouldn’t allow Cody on the flight till he’d dealt with his “problem.” “It was a nice flight,” Cody concluded after miming his impromptu washing in the airport bathroom. 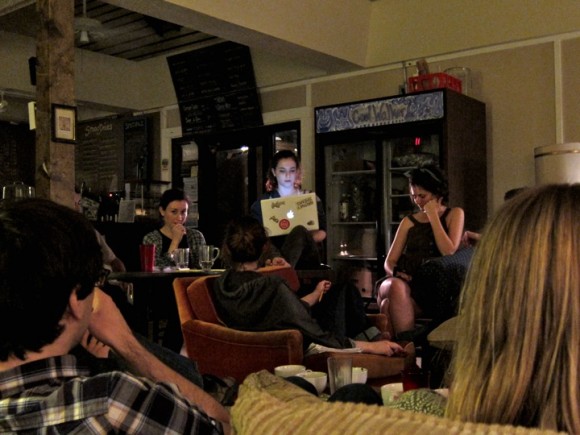 The main course soon arrived, the recipe purportedly pirated by the smelly storyteller himself; Cajun tempeh atop creamy polenta, the spicy and smooth accented by a smattering tart quartered tomatoes and green onions. Collard greens stewed into sweetness with raisins came alongside the main, us diners filling ourselves with this soul-infused food as the other half of the hosting team, Matt Polzin, stepped into the spotlight to read a story he’d written about a lonely lovebird and the discoveries of youth, a story based on truth, but fictionalized in order to be made public. The short story was rich with description, the author dealing with a possibly tender subject with semantic wit.

Alex Fixler then stepped up, accompanied by her MacBook, sharing with us very short stories interspersed with very very short six-word stories. “But it walked on my pillow,” “the baby’s complexion was beginner’s luck,” and “stories are better embellished with lies,” were some of the minies scattered amongst her more meaty anecdotes.

Dessert arrived—sweet crunchy pralines, pecans delightfully frozen in sugar—and Matt Broerman told a story about butchering a bull, the gore made somehow poetic. The ranch workers piled into a flat bed truck one morning—“there were more curves in cars then”—and journey out to a near-death bull. “So, he shoots,” and Broerman winced as if it were all happening again. He described the transformation from animal to meat, the bull hoisted up, skinned and disemboweled, all this horridness made fascinating. Illustrating the organs sliding down into the chest, it was “as if it had been made for this treatment,” the innards of this once-bull now “almost like the yolk of an egg.” We followed him to the “white, beautiful, clean” butchers room, to have the story end with an explanation as “how I learned to not be a vegetarian.”

Becky Marshall ten took us in an entirely different direction with a bit of Harry Potter action-adventure-romance fan fiction. The madcap story was graphic with language, “billowing cloaks,” “rodent green tunics,” “brawny man arms,” “slippery foreboding,” and “corpulent exclamations.” While our faces had worn identical masks of simultaneous horror and awe for Broerman’s tale, we all giggled together through Marshall’s tale.

The pace changed with and read a rapid, engaging, alliterated poem from Betty –. Some particularly ear-catching lines: “the mantra of multiculturalism,” “chameleon Camelot,” and “folkways and mores”—perhaps one can reconstruct the punch of her poem from this selection. Crystal Miller, the MC herself, rounded out the evening with her list of story ideas, some left as only the enticing topic sentence, some completed, like her dumpstering at Yoder’s that began with a hunger for sweet creamy pie, developed into imagined pitchforks, and ended in the emergency room.

“All of the stories…were extremely personal in some way. Even Becky Marshals Harry Potter fan fiction had this…she really came out in it, her personality really showed,” remarked Polzin of the high quality of all the stories. “I really enjoyed myself.”

As did we. We left full and content, satisfied with a good meal, satiated by the good stories. It was a special night, two of the main components for human happiness—good food and engaging storytelling—celebrated with peers and friends in the warm light of the Four Winds.