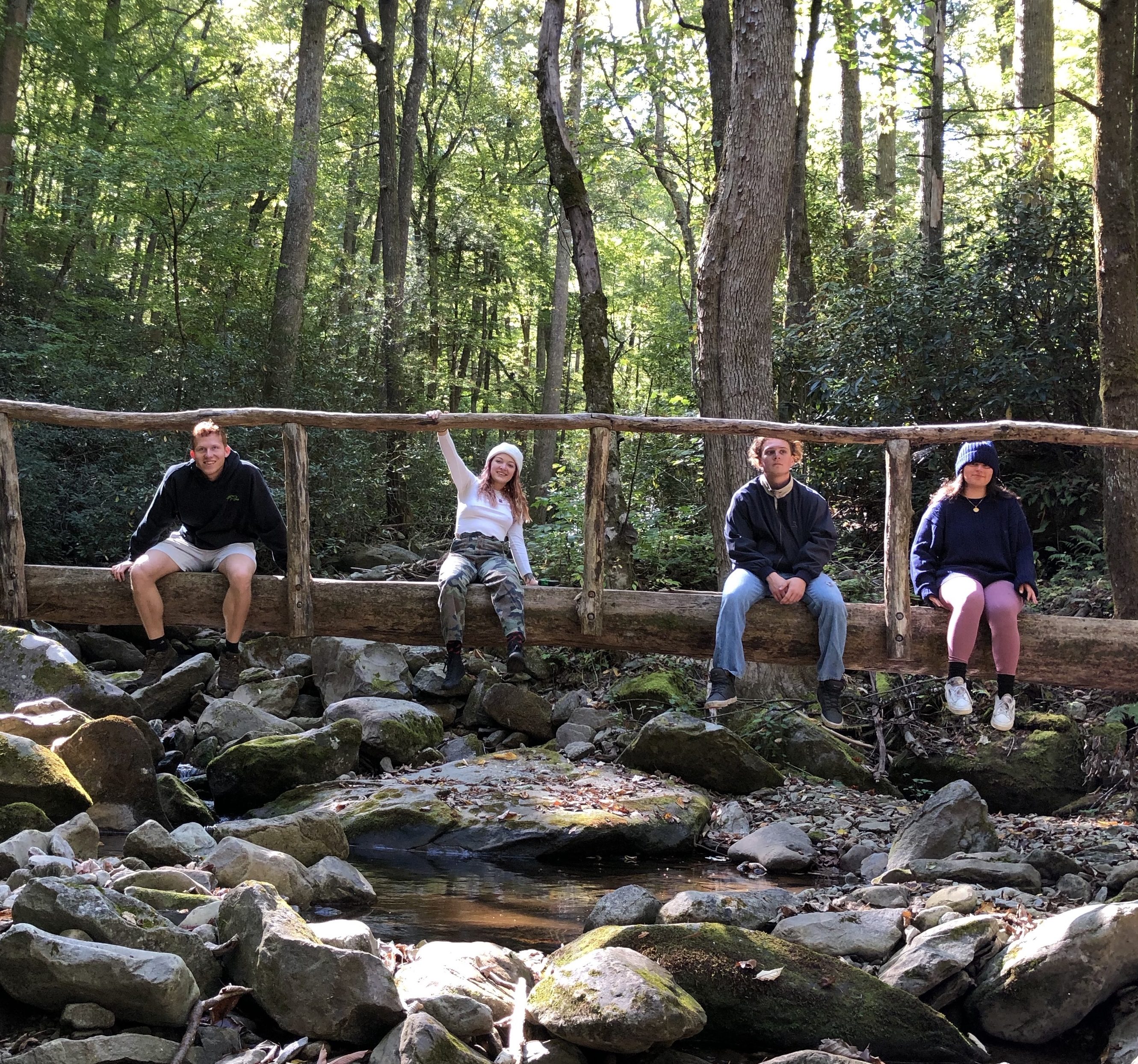 Mod 1 saw a hurricane, shifting leadership in administration, new professors and a fresh start to the school year. After the highs and the lows of the first few weeks of school, students were in dire need of a break. Some spent break visiting family, travelling across the country, attending conferences, camping, hiking and even performing in local productions. The following students shared their unique experiences.

“We went because we wanted to camp and a lot of my friends had not experienced any type of mountains before,” Brody-Ogborn said.

During their trip, the group spent time appreciating nature, making the most of getting the opportunity to recharge away from New College for a little while.

“The best parts were hiking with friends and de-stressing from school,” Brody-Ogborn said. “Also, it’s a lot of fun to tend to a fire.”

Thesis students Olivia Siegel and Catalyst Layout Editor Cait Matthews took their week off to visit Erin Everdale, fellow New College thesis student, in Olympia, Washington during Everdale’s exchange semester at Evergreen State College. Matthews and Siegel, who had never been to Washington prior to this trip, planned this visit to catch up with their friend while taking some much-needed time off from their busy thesis year.

“At Evergreen we hiked in this breathtaking forest adjacent to the dorm’s parking lot,” Matthews said. “The trails there lead to the college’s gravel-laden beach, where many trees fall perpendicular to the shoreline. It’s a spectacularly beautiful campus, nature and building-wise, with a strikingly quiet soundscape compared to New College. They also have a student run cafe called the Flaming Eggplant, which was interestingly closed last year for the same reasons as Four Winds and is also projected to reopen this fall.”

“Practically every shop [in Downtown Olympia] seems to be a locally-owned business!” Matthews said. “It was so nice to see them thriving and not being drowned out by a bunch of corporations. While there, we were grateful to see a jellyfish dancing in the Budd Inlet of Puget Sound. [In Seattle] my friend Eddie graciously showed us some special places and helped us navigate. I’d never seen a city with consistent public compost bins, rainwater used to flush toilets, and zero-emission electric trolleys and buses before. There were lots of local businesses, beautiful parks, and loads of spaces with blatant inclusive intentions.”

For Matthews, one of the big benefits of going up north for fall break was getting to see real fall, something Floridians rarely get to experience.

“Seeing real fall was incredible!” Matthews said. “It was reassurance that I’m meant to live in the cold, as I’m a pretty warm person. Especially in Seattle, as long as people are dressed comfortably warm enough for their bodies and have a rain jacket on deck at all times they’ll be set. Fall was interesting in this region because only a small portion of the trees have leaves that change color, as evergreens and such do not. There was a solid mix of deep greenery, reds, oranges, and yellows, which especially popped in the gloomy weather.”

Despite having a fun time with friends, Matthews and Siegel are ready to return home and get back into the swing of things at New College.

“The last several days were mostly void of direct sunlight, so while I was excited to get away for awhile and experience new things, I’m ready to return back home and get some consistent vitamin D,” Matthews said. “It’s time to get back on the thesising train and see our cat, Skitters!”

Third-years Megan Ballard and Catalyst Copy Editor Anna Lynn Winfrey travelled to Denver, Colorado during their break, spending time camping, cooking by the campfire and relieving some of their school-related stress.

“Camping was so much fun!” Ballard said. “We drove up to Mount Princeton and relaxed in some hot springs. Then we found our campsite right next to the Arkansas river. We set up our tent first and then built a fire before the sun went down. It wasn’t as cold throughout the night as I thought it would be, I actually was pretty hot. We cooked our dinner over the fire and made s’mores at the end of the night. For dinner we made potato packs, which are basically cut up potatoes, onions and carrots, wrapped them up and put them in the fire. We made some beans and then melted some cheese on the potatoes and dinner was served.”

Ballard, who had never gone camping before this trip, thoroughly enjoyed the experience and is planning on going again someday soon.

“It was so nice to be out of the Florida heat for a couple of days!” Ballard said. “Watching the leaves change reminded me of being home in North Carolina. It was nice and warm during the day and chilly throughout the night!”

Thesis student Lucy Sanz spent her last weekend of fall break at Sarasota Sky Club and Bar, putting together and performing in Sarasota’s Rocky Horror Picture Show Spooktacular Ball. Sanz worked alongside several professional performers including drag king Spikey Van Dykey to put on a memorable show, one unlike she had ever been a part of before.

“We all came from different places to put on this show,” Sanz said. “Some of us drove hours just to be there and I actually flew back to Sarasota early just to be in this production, so we only got the chance to practice the day of. That being said, I feel like my three years of doing Rocky at New College prepared me for this performance.”

In the production, Sanz played Magenta, her favorite character not only in Rocky Horror, but in all of theatre, and made the most of this opportunity to play around with the role and make it her own.

“I was comfortable with the job because I know Rocky Horror like the back of my hand and I identify with Magenta’s bold and fearless attitude, and mostly her hair,” Sanz said. “Being in a shadow cast is mostly intended to be fun so my only job was to channel Magenta’s spunky energy and to have fun with it. I always enjoy putting on this show because whether it’s a performance in HCL 8 or at the Sky Bar downtown, the goal is always to just have fun. Everyone in this performance was just happy to be apart of it, ready to kill it on stage, and excited to bring that fun and joy to the audience.”

Sanz loves the entire experience of Rocky Horror, but especially enjoys being able to make connections with audience members and to see the joy it brings into their lives.

“One of the best parts of Rocky Horror is the interaction the cast gets to make with the audience,” Sanz said. “It’s so fun to join the crowd and share energy with the people who come out to see us, so it was especially great to have my friends there for support so I could interact with people I love. I always thought I would only get the lucky opportunity at New College so it was a joy and huge surprise that I could do that in local Sarasota. It would be a joy to do this again for the last time at New College this January and I hope that once I graduate I could have the chance to do this again wherever I end up after graduation.”

“We also participated in an ‘un-conference’ where we connected with students and environmental activists and leaders from all over the country to dive deep into specific environmental topics, like incinerators or different environmental organizations on college campuses,” Sander said. “We also went to a Circular Economy Workshop, held by the Ellen MacArthur foundation which was really amazing. We talked about different ways that a non-linear economy based on redesigning products, recycling, and mimicking nature to make things more sustainable.”

Along with presenting, going to workshops and participating in group discussions, Sander enjoyed being in the city of Philadelphia and connecting with fellow conference-goers. “We also had a great time eating lots of delicious vegan food in Philly and talking to tons of other students that cared about the environment like we do,” Sander said. “Our plan is to use all the knowledge we gained from this conference to implement more sustainable practices at New College, especially through our eco-rep program!”