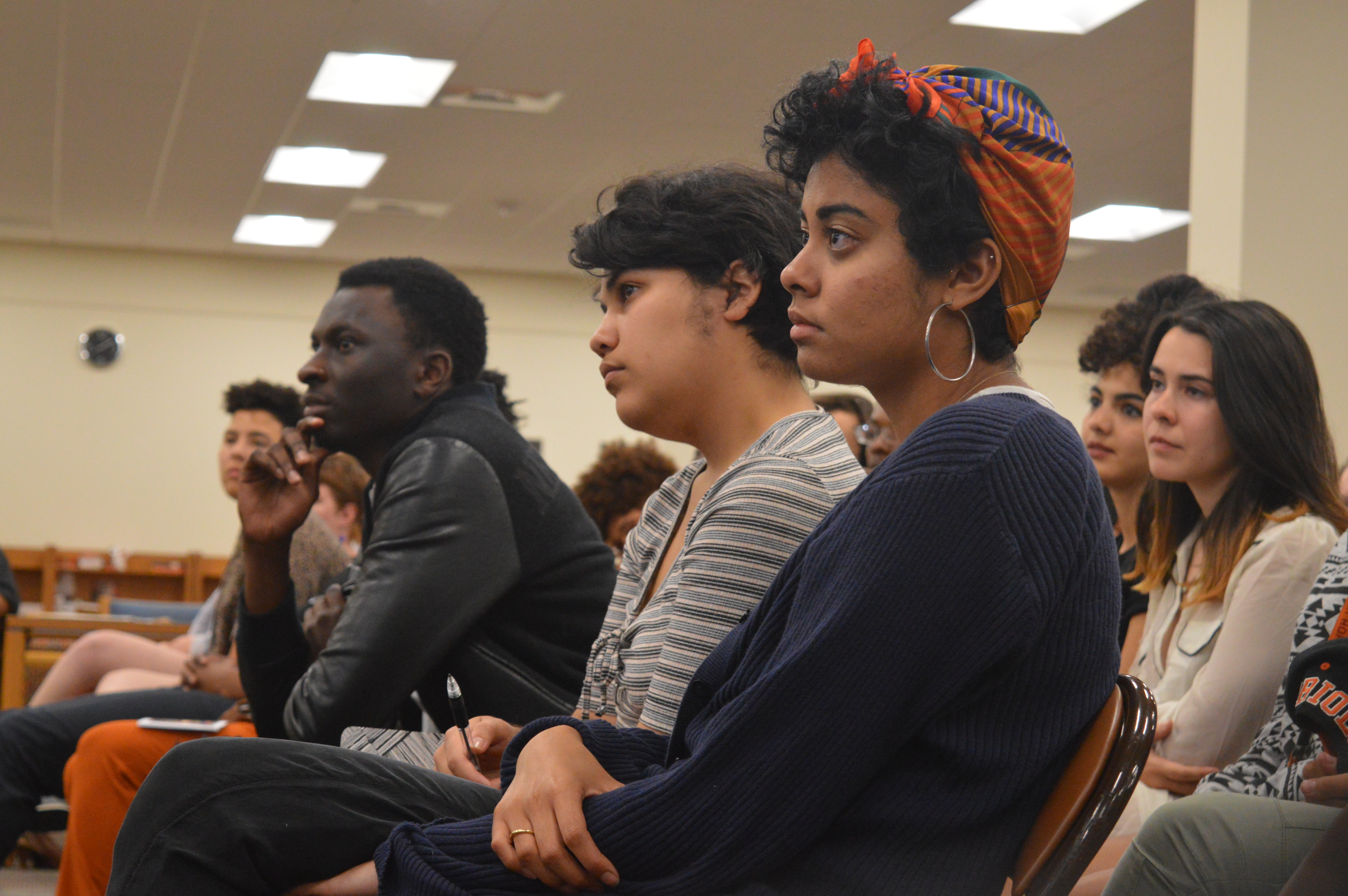 All photos by Giulia Heyward

The Redefining Activism: Navigating Identity and Self-Care Symposium took place on Sunday, March 5 in the Jane Bancroft Cook Library. The symposium was one of the few last events part of the 2017 Black History Month programming centered around this year’s theme of “Black Action.”

The event consisted of two panels, featuring prominent figures in the Sarasota community, and one Keynote Address from Keynote Speaker, Kavindu “Kavi” Ade.

Loriston asked the panel questions concerning local activism in Sarasota, specifically in Newtown, which opened up a larger discussion of racial disparities in the area.

“I need to use my voice to amplify issues in Sarasota that people are afraid of having,” Refos said, regarding the creation of the BLM chapter in Sarasota and the role of activism in the arts.

Baynes cited activism as a culmination of personal passion, citing the water crisis in Flint as an indicator of this.

“There were people who were active and involved, but once [the water] impact you, you will start to get out there. [Activism] is a personal passion,” Baynes said.

The panel members divulged in a raw and honest conversation with the audience, discussing the construction of Sarasota where Martin Luther King Jr. and Indian Beach road are represent two very different demographics of Sarasota, and are only separated by Tamiami Trail.

Such a raw and honest conversation inspired comments from the audience, who, at certain moments, interrupted the speakers to share their opinions.

“There is so much for you students to take a part in Sarasota’s culture,” Shaw summed up to the audience of largely New College students. “So do what you do, and do it quickly. It all starts here in the barbershop.”

The second panel, on respectability politics for black professionals, focusd on the experience of being a black professional in Sarasota. The panel featued former New College professor, Elzie McCord, along with multi-media artist and former Ringling College of Art and Design (RCAD) professor, John Sims, social worker and business woman, Britney Brown, and Vice President of the Sarasota Democratic Club, Delores “Dee” McFarland. The panel was facilitated by New College alum, Snousha Glaude (‘12).

“There have been many influencers in my life,” McFarland said, when discussing the individuals who had helped her to reach the success she has acheived. “I grew up in the Civil Rights-era and I did a lot of marching.”

McFarland listed her parents, godparents, one of whom was one of two black dentists in the area she had grown up in, and the lessons learned from attending Harvard University and working in corporate America.

“Each generation brings us higher, but we need to remember where we came from to do so much better,” McFarland said.

While Brown discussed using your resources, whatever they may be, as the key to success.

“Education is not the sole key,” Brown said, dismantling the idea that a college degree is the only way to be succesfful. “Having those resources, and exposing people to those resources, is. However you can get it, get it.”

After both panels, Glaude, along with thesis student Haiwen Yu and third-years Alexandra Schelle and Yara Rincon spoke on former New College student, Ijeoma Uzoukwu, who recently passed away. Uzoukwu had been involved in Black History Month planning while attending New College, along with other activist efforts both on campus, such as their involvement in Students Targetting Oppressive Powers (STOP) and local protests in Sarasota.

Following this, third-year student and member of both Queery and the Black History Month planning committee, Lorraine Cruz, introduce Ade.

Ade is a Spoken Word poet and educator from Philadelphia, who was invited to provide the Keynote Address for the Symposium.

“I want to begin by thanking you for inviting me to your campus,” Ade began. “For sharing this moment of black intellect and excellence, black celebration, black resistance, black history and, most importantly, black future.”

Ade’s Keynote Address discussed a world post the recent election of President Donald Trump, as well as the role of the arts in social justice.

“My art is also activism, my poetry is resistance,” Ade said.

Ade listed activism as also including kids blasting Kendrick Lamar’s “Alright” while driving to throwing a dance party to Ade’s own example of building blanket forts and watching movies with their partner the following days after the election.

“We deserve happiness, and claiming that, in the face of insurmountable odds, is also an act of courage and resistance,” Ade told the audience. “Please, be kind to yourself, find the moments and the people and the places that can sustain you while you do the work, and it is okay if that work is simply continuing to survive, in spite of. We need you now more than ever. There is a world waiting for you.”