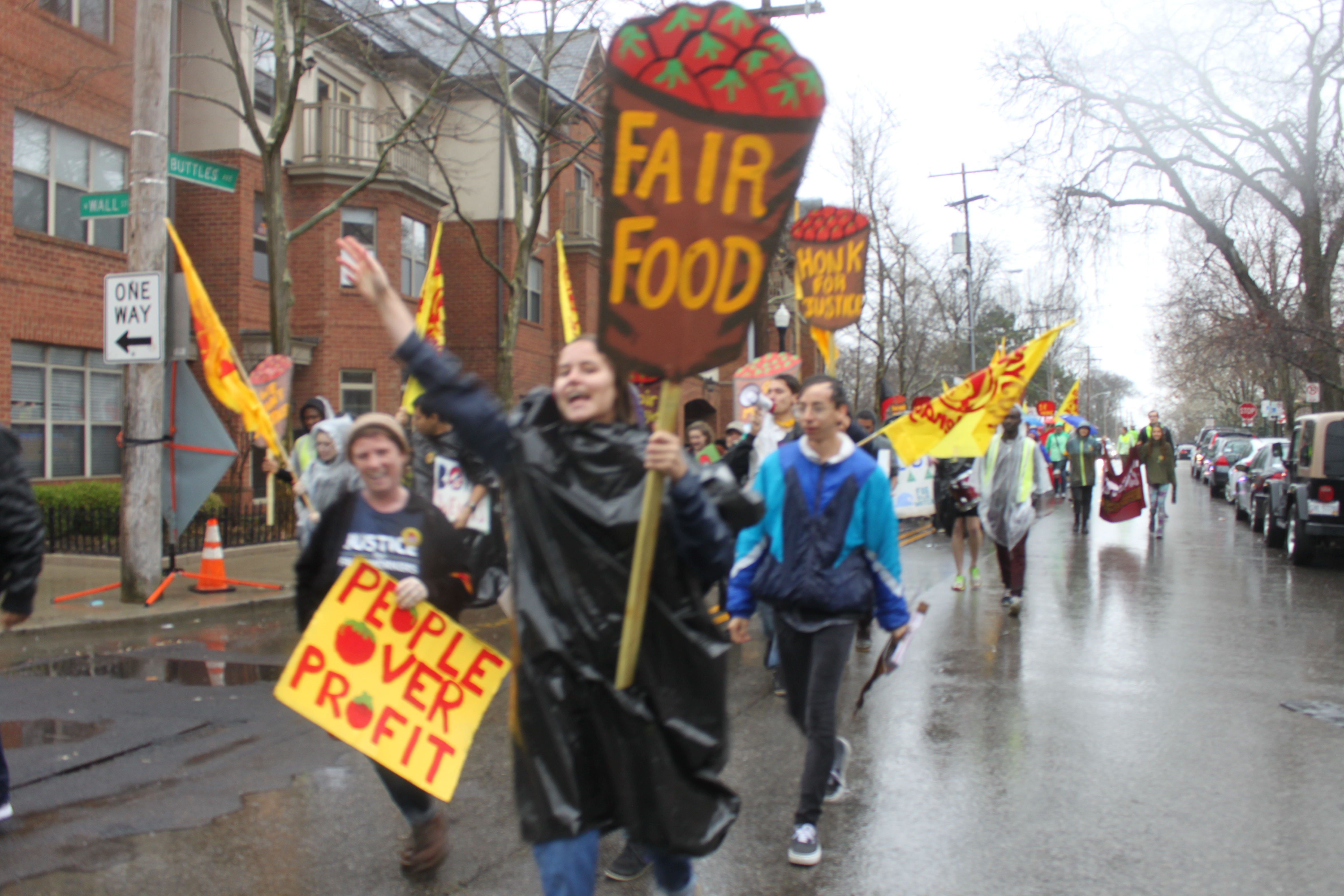 On Sunday, March 28, around 500 farmworkers and consumer allies from across the country marched three miles through the streets of downtown Columbus, Ohio, during a downpour to demand that Wendy’s join the Fair Food Program (FFP). Many of the farmworkers represented the Coalition of Immokalee Workers (CIW), a human rights organization created and led by farmworkers that fights for and protects workers’ rights in the fields. Accompanying the farmworkers in the march were students, community members and people of faith from around the nation. Sunday’s parade was the pinnacle of the CIW’s Return to Human Rights Tour, a continuation of their national campaign that calls on Wendy’s to join the FFP.

The fight for Fair Food

The FFP is a workplace-monitoring program that is designed, supervised and enforced by farmworkers. The program harnesses the power of consumer demand, urging retail food companies to come to the table and join the program, ensuring that they buy tomatoes from growers who follow the Fair Food Code of Conduct. Participating buyers are required to pay a small premium – thereby increasing workers’ wages and helping to reverse decades of poverty.

For 12 years Wendy’s has held out in joining the FFP, moving their tomato purchases from Florida – with farms that follow the Fair Food Code of Conduct – to farms that don’t in Mexico. In January of 2016, Wendy’s released a supplier code of conduct, but the CIW claims the code has no effective mechanisms to ensure that suppliers actually comply by the standards. In addition, the CIW disapproved of the fact that the code was developed by Wendy’s and created with the “valued input” of their suppliers, yet left out the voice of the workers’ in their supply chain. Two months later the CIW announced a national boycott of Wendy’s.

Early Friday morning, March 24, a group of New College students and other community members journeyed up to Columbus to join in a weekend of action – the culmination of the CIW’s 13-day Tour.

The weekend began with a vigil Friday night outside of the Wendy’s headquarters in Dublin, Ohio. Busloads of allies arrived in Columbus late Friday night with the Florida caravan clocking in at 5:30 a.m Saturday morning. We barely had time to lay out our sleeping bags on the floor of Summit on 16th United Methodist Church and drift off into sleep before waking up at 8:00 a.m. for breakfast.

Saturday marked the start of the Summit, a day of speakers and social justice oriented workshops.

That morning, the CIW acknowledged a group of Ohio State University (OSU) students and community members who fasted for seven days in hopes of convincing their university’s administration to cut their contract with the Wendy’s on campus.

“We are […] here to demand that Wendy’s, after four years of public campaigning, sign on to the Fair Food agreement,” Rachel Metzler, an OSU alum and one of the 19 fasting, said. “And again we are here to call on OSU to lead the way and cut its contract with Wendy’s.”

Lucas Benitez, a founding member of the CIW, applauded the OSU students and community members who fasted and then introduced an act of popular theatre – a method the CIW uses to work through complex issues and present them in a way people can better understand.

“We want to explain our struggle to you today in a way that we’ve done for a long time,” Benitez said as translated by another member of the CIW. “[We use] popular education to build consciousness in our community.”

The set depicted two farms, one that does not comply by the FFP standards on the left and a farm that does on the right. The show ended with farmworkers coercing Wendy’s to the Fair Food side to sign the Fair Food Agreement.

Following El Teatro, a variety of workshops and breakout sessions were facilitated by organizers from across the country, concerning a plethora of topics that emphasized the intersectionality between different social justice movements and the fight for farmworkers’ rights. The workshops covered mass incarceration, the related Milk with Dignity movement in Vermont, migrant and workers’ rights in the Rio Grande Valley, the history of farmworker labor in the United States and more.

“I thought the workshops were really incredible because they had a lot of different perspectives,” second-year Alba Abrams said.

The summit ended with a night of performances by different acts including the Peace Poets and Olmeca and Shantilly. The Peace Poets are a collective of artists from the Bronx who use poetry and music as a platform for activism. Similarly, Olmeca, who performed with Shantilly, is known for using his music to amplify the voices of the Latin American community and has a long history of collaboration with the CIW. Even after the concert ended, friends lingered outside, singing, dancing and creating music. The sound of jaranas echoed through the streets.

It was a hectic morning as we rolled up our sleeping bags and prepared for the climax of the Return to Human Rights Tour. Many allies chose to attend the church service before boarding the buses to Goodale Park in downtown Columbus. Hundreds began to gather as the threat of rain loomed; ponchos were donned as members of the Coalition and allies addressed the crowd.

“Let’s make sure that not only are we marching today, but taking this energy from this march to keep up the fight after today,” Columbus Councilwoman Elizabeth Brown said. “I feel that it’s raining and we should start walking soon.”

And with that, roughly 500 farmworkers, their consumer allies and three elaborate floats marched three miles in the downpour, briefly stopping at the Wendy’s across the street from the OSU campus. The crowd’s energy culminated here as they shouted, “Boycott Wendy’s!” and “We’ll be back!” before continuing on and ending in a courtyard on the OSU campus.

It was in this courtyard that the weeklong fast by OSU students and community members came to an end with bread presented by children from Immokalee.

“I think that this action [the parade] was particularly impactful because of the fast that the 19 students and community members have done here at OSU,” Meghan Cohorst, a member of the Student Farmworker Alliance (SFA) said. “It’s exciting for me as sort of an old person in the world of SFA to see students continuing to recognize that power and continuing to demand of their administrations that they do the right thing.”

After a powerful weekend of action, CIW farmworkers and allies remain hopeful that a Wendy’s commitment will come.

“I am very proud and happy to be here with all of you and that you’re all supporting the coalition,” a leader of the CIW said as translated by a fellow member. “And thanks to all the work that y’all are doing, we will show Wendy’s that we’re going to cut her braids off and make her come to the table. And thanks to all the students and allies, we will win.”