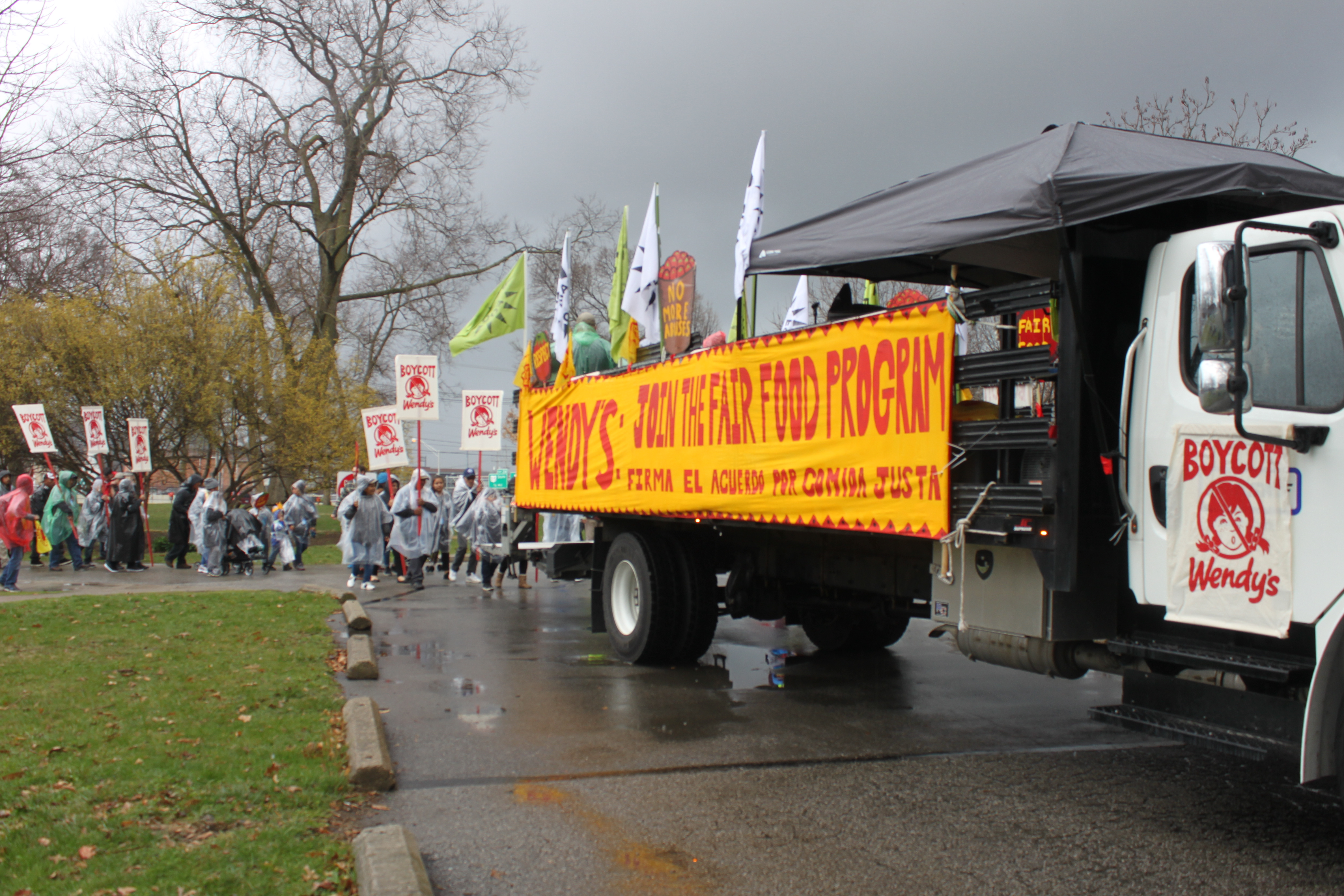 The parade kicks off in Goodale Park!

For one week, four New College Students – and one student from Valencia College in Orlando – camped out inside of a tent on Z-Green to support a nationwide boycott of Wendy’s called on by the Coalition of Immokalee Workers (CIW) in an attempt to get them to sign on to the Fair Food Program.

This tent was the site of a growing number of signs, made by students in support of their campaign demonstrations and a growing number of students who stopped by and spent time there throughout the week showing up to support for their fellow students. But most of all, the tent became home to third-year Alex Schelle, second-year Emily King, second-year Sara Friend, second-year Ximena Pedroza and Valencia College student Xavier Goud as they spent five days fasting for farm worker justice.

The Coalition of Immokalee Workers (CIW) was formed by farm workers in 1993 to fight unfair treatment and modern day slavery conditions in the farm worker communities in Florida. By 1995 they became organized, and eventually took part in a 30 day hunger strike to fight injustices of farm workers. In 2001 they began to involve students and people of faith in their movements to get big companies to sign on to the Fair Foods Program.

“We realized that students had a lot of power […] that’s why the campaign shifted and we demanded corporations come to the table with farm workers,” Leo Perez from the CIW said at a panel discussion on Tuesday, April 11, with a translation provided by a member of the Students for Fair Food.

The Coalition is now asking Wendy’s to add it’s farm to the 90 percent of farms in Florida that have already joined the fair foods program by paying one penny more per pound of tomatoes to provide better wages for farm workers.

Under the fair foods program, workers would also have access to things like clean water, clean bathrooms and a 24-hour complaint line which they can call to have access to people who will fight for their rights if they feel they are not being treated appropriately. This puts the responsibility of fair treatment into the hands of the workers, not the corporation, which created a bottom-up approach to liability for farm worker safety.

In March, the CIW took part in a three mile march through Columbus, Ohio, to support Ohio State University (OSU) students who are asking their president to cut its contract with Wendy’s unless Wendy’s joins the Fair Food Program.

After the events of the protest, in which New College students traveled to Ohio to participate in, five students were inspired to participate in a rolling fast and create a week of events to support the CIW in their demand that Wendy’s join the Fair Food Program.

The first event of the week was a letter writing session where New College students wrote letters to OSU students showing their support for their movement to remove Wendy’s from their campus. They also wrote letters to the OSU president himself asking him to support his students and cut their contract with Wendy’s unless Wendy’s decides to participate in the Fair Foods Program.

The CIW believes that the OSU contract is the sweet spot of the campaign, as protests are bad press for Wendy’s and cutting this contract will cause a monetary loss for the company and inspire others to join the cause.

On the second day, there was a panel discussion with CIW member Leo, as well as some of the students who are participating in the fast.

“That pledge card is going to go on top of the stack when we send them to OSU,”  thesis student Alex Schelle said.

At 10 a.m., students talked about their experiences and reasoning for wanting to participate in the day-long fast, and then, at 7 p.m. they walked down to the bay for sunset meditation.

“Sometimes us students focus on us. We focus on the fight for fifteen, we don’t really focus on the rights of farm workers,” second-year Ximena Pedroza said, explaining her motivation for participating in the week-long fast.

On Thursday, a Human Rights Vigil was held for the Sarasota Community. Several New College students were in attendance, handing out pledge cards and explaining their efforts. Pedroza took the stage to discuss her experience as an immigrant, but began by making a statement about her involvement in the fast.

“Before I start, I want to apologize if I seem a little tired, I’m on my third day of fasting to support the [CIW] if anyone has any questions I’d be happy to answer them later,” Pedroza said before she began her speech.

At the vigil, New College students in the audience handed out fliers and offered pledge cards to audience members asking them to come to what they called “the finale” of this week of action a protest outside of a Sarasota Wendy’s.

Two New College students held a large banner in front of the Wendy’s, while other students and community members formed two circles on either side of the Wendy’s drive way and began to march. They shouted chants calling for anyone that could hear them to “boycott Wendy’s!” as well as chants directed at the cooperation itself such as “Wendy’s shame on you. Farm workers have families too!”

At the height of the protest, two vans of members of the CIW showed up to join in the protest as well, and the chants were repeated in English and Spanish as they joined the circles of students.

While the protest was going on, protesters also passed out fliers to cars stopped at red lights and explained the movement to them briefly before traffic picked up again.

After the protest, there was a ceremony held at the bay where four fasting students broke their fast ceremoniously with a piece of bread.

“To sum up this whole week in one word it would be love. Throughout this whole week I saw so much love. Not just on our campus but in our community,” Pedroza, one of the five day fasting students, said, reflecting on the experience.

After the breaking of the bread, New College students passed the fast on to University of South Florida (USF) Tampa and Eckerd students who would be picking up the rolling fast.

“This is a really great experience and we’ve gotten a lot of support on our campuses. We’re really excited that people are signing pledge cards to fast even if it’s just for one meal,” Holly Rutherford a second-year at Eckerd College who would be picking up the rolling fast said.

“What we see them doing is basically modifying little by little the code of conduct without actually implementing anything, or involving workers in the process, so that changes can be enforced,” Patricia Cipollitti translated for Leo Perez.

“With regards to the students that have been fasting, Wendy’s has said that it’s irresponsible for the CIW to encourage students to forego their nutrition to further our commercial interests,” Perez said.

In Sarasota, when students tried to deliver a letter to the Wendy’s restaurant where they protested, they were refused entrance to the facility. Unlike the previous times that students had protested at this Wendy’s when they were allowed to give the letter to a manager.

The New College fast is part of a rolling fast which will continue until Wendy’s decides to join the Fair Foods Program. Next week students from USF Tampa and Eckerd College will participate in the fast.

The CIW has a plan in the works to be able to infiltrate the Wendy’s board of trustee’s meeting on May 23, 2017. Until then, the boycott of Wendy’s called on by the CIW will continue as will the protests, until Wendy’s comes to the table with farm workers.

As the protestors at the Wendy’s protest chanted, “We will be back!”