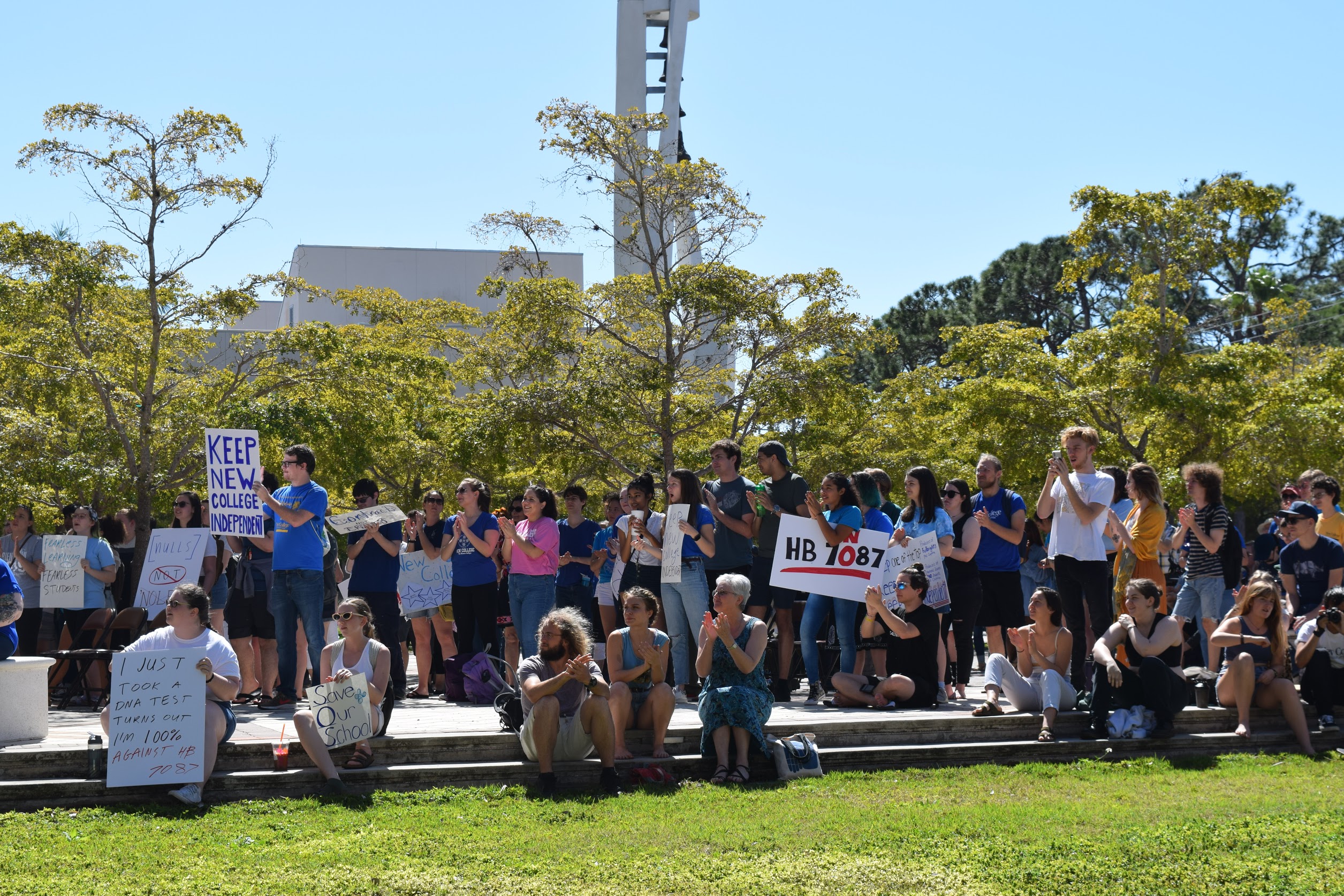 “Who loves an independent New College?” thesis student Alex Barbat shouted as students erupted into cheers of support. On Thursday, Feb. 20, more than 150 students, faculty and staff gathered in Koski Plaza to demonstrate their opposition to House Bill (HB) 7087, which would merge New College and its assets with the University of Florida (UF).

The bill originally proposed merging New College with Florida State University and Florida Polytechnic with UF, but was amended on Feb. 21 to merge Florida’s two smallest schools with its largest.

Proponents argue HB 7087, which was passed by the Florida House Education Committee on Wednesday, Feb. 12, would cut costs for taxpayers.

“We have an obligation to taxpayers to generate degrees at the lowest possible cost,” Randy Fine, a Republican from Brevard county, said to Florida Politics, which first reported the story. At the committee meeting, Fine also mentioned higher administrative costs and declining enrollment, despite the college receiving additional funds from the legislature for growth.

“We are the only public liberal arts college in the state because cost per degree is not a correct way to understand how this college’s financial situation works, but it’s also not how you determine the value of an education,” Barbat told the crowd. “We are getting an education that is unique to the state of Florida. Our theses are incredible. We produce more Fulbright scholars per capita than Harvard and Yale, why would you try to eliminate that?”

Keshishian emphasized the history of New College’s involvement with the community.

One of the reasons state representatives support the merger is because New College underperforms on the first performance-based funding metric set by the Board of Governors, which oversees Florida’s 12 public universities. The first metric deals with the percent of Bachelor’s graduates employed or continuing their education further one year after graduation.

“A lot of our students are not so focused on the next 12 months; they’re looking 10 years ahead at what they want to do and try to figure out and put together the various pieces of their lives,” President Donal O’Shea told the Catalyst in Dec. 2019. “We look better if we look 10 years out.”

“I run a habitat restoration business in Sarasota and almost all of my interns are New College students,” Patton said. “I want to hire a wide range of people who come from interdisciplinary backgrounds, who get to work hands-on with some of the best faculty in the United States of America, and that’s something you can only really do at New College.”

In addition to skills that can be transferred to careers, Florida Young Democrats President and alumna Wesley Beggs (‘10) spoke about students’ ability to stand up for what they believe in.

“I was a candidate for the Sarasota County Commission in 2018 and I have been blown away at what these students have been able to organize with such little notice,” Beggs said. “It is not just us, it is Florida Polytechnic, but it is also students who cannot qualify for a Pell grant, but cannot afford education in this state. There is so much on the line with this bill. Every single line of it needs to be thrown out.”

In a post-protest interview, Barbat emphasized how the rally was a venue for students to voice their concerns about HB 7087.

“So far students have been left almost entirely out of this conversation,” Barbat said. “It’s been wonderful to have top down leadership and guidance. But like, we also need to have a voice.”