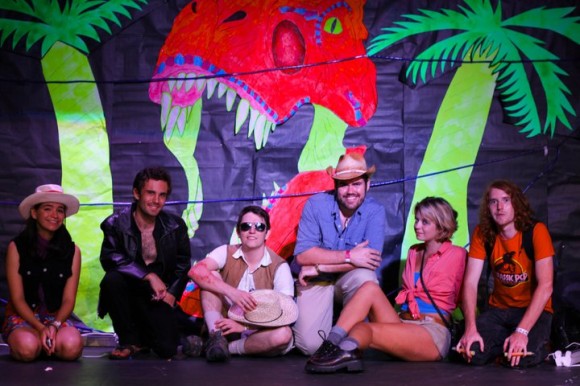 A number of students and guests participated in the organization and management of Jurassic PCP, including (from left to right): thesis students Sarah Iacobucci, Evan Sigmund, Tom McKay, Michael Dexter, alum Rikki Miller (’03) and thesis student Chris Pedersen, pictured posing in front of a decoration in the Black Box Theater.

Bruce White is the artist New College commissioned to create a sculpture for the almost completed academic building. Since White splits his time between Florida and Illinois, most of his surroundings are flatHowever White’s artwork is anything but.

“I’ve done art all my life,” White said during an interview with the Catalyst. “In high school I spent most of my time in the art room. My mother tells me I drew on walls. Walls I wasn’t supposed to draw on.”

White’s parents often discouraged him from pursing art. “They tried to get me interested in other things,” White said. “I went away to college and after the first two years I knew art was what I had to do. I never thought I could make a living on art until I found out I could teach art and that would keep me from poverty. I got into art education as something to fall back on.” .

White was born in Bay Shore, New York during the early 1930s. His father worked on the Spirit of St. Louis, the first airplane to make a non-stop flight from New York to Paris. His family then moved to New Jersey where White’s father worked as a mechanical engineer. He designed and patented high altitude fuel pumps for World War II aircraft.

When White first began to sculpt, he would ask farmers for their old scrap metal to save on one of the major expenses of his art. Most of his sculptures are now made out of aluminum or stainless steel. “If you want to be a sculptor then just get in with the materials,” White explained. “It’s very industrial. I’ve always liked watching bridges being built and marveling at their construction.”

White received his bachelor’s degree in Art Education from the University of Maryland. He went on to get his master’s degree in Art Education and his Doctorate in Fine Arts and College Teaching from Columbia University in New York. The sculptor’s doctoral thesis is entitled “TIG Welding and Chemical and Electo-Chemical Treatments Applied to Sculpture.”

“I love teaching,” White said. “It was great, particularly at the graduate level. At that level I had people who wanted to work with me and become sculptors themselves. That’s pretty neat because essentially they become colleagues and friends for life.” Faculty meetings were the only downside of teaching for White. They seemed to always take him away from what he wanted to do.

White chose to continue teaching at Northern Illinois University because of its proximity to Chicago. In 1993 he received a Distinguished Research Professorship in Art from the school and in 1996 he took early retirement from the university to focus on his sculpture.

According to White, his art has changed over the years. But even when he thinks a sculpture is different from his past works, people still recognize it as his. “The artists can’t escape themselves,” White said. “They’ll do something different, but there’s always that trace of themselves.”

The concept of wind clicked with White when he was deciding on the sculpture’s form. According to White, his public art, such as his future sculpture for New College, can be difficult for the sculptor and the viewer. “You could be doing something really spectacular and they can just walk by indifferent,” White said. “Public art is different from gallery art in that people who come to the gallery are interested in the artist. Public art is there; it confronts you. You can try to get something out of it or ignore it. It’s a unique kind of experience because you’re putting something out there for people who you’ll probably never talk to.”

Enraged passersby have gotten out of their cars and call White names. He has also had people come up to him to tell him they love his work. “Enraged people are frightened about what they don’t understand,” White explained. “Art and music can be very trendy. You want something that will hold itself in time.”

When White is not sculpting he sees art films, goes boating and camping and visits his children, Amanda, Jennifer and Matthew. “What I’ve said to my children is to follow your dreams,” White said. “In a sense that’s really corny. But if you’re not sure what you want to do, then take a lot of classes. That’s what I did in college.”  Though he’s not particularly interested in fabric, White took a textile class because he liked the machinery and colors used in the production.

“[Sculpting] is always very hard to describe,” White concluded. “It’s very much like writing. … I don’t normally sketch out an idea. I pick up paper or metal and manipulate it and hope that something happens that I like. I might go through one hundred pieces of paper before I find something I like.”

Information for this article courtesy of Stephen Luecking’s Engineering Expression.