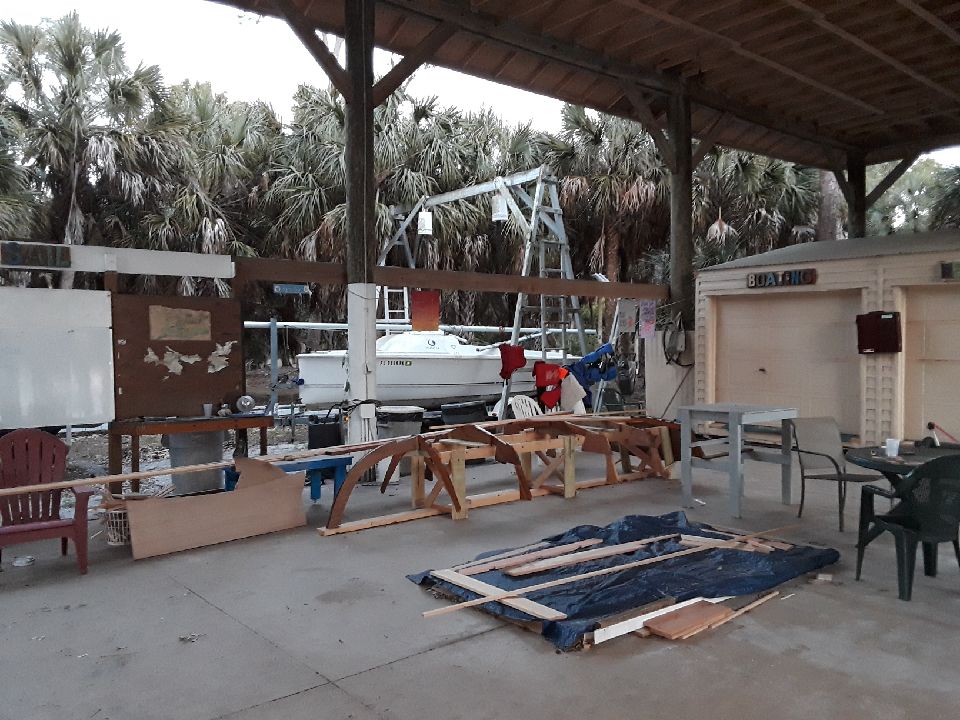 Students are currently building a boat at the Caples waterfront as part of a tutorial entitled “Maritime Construction Independent Reading Project (IRP).” In this class, three students are constructing a Glen L 14 sailboat from scratch and are documenting the construction process through a photo journal. Along with taking advantage of the beautiful waterfront campus, this hands-on class is giving students the skills required for watercraft construction from understanding the terminology to principles of design.

The wooden sailboat will be 14 feet long, relatively lightweight and flat-bottomed, making it easy to take the boat up to the beach and in and out of the water.

Sailing Team Captain and thesis student Ren Chock helped coordinate the boatbuilding project this semester. He was inspired to organize the tutorial due to his experience handling boats and the accessibility to create classes at the school.

“For me, this is the second boat that I’ve built,” Chock said. “I made my first one, a Mixer II, with my dad when I was 13. I’m remembering a lot of things that I forgot that I learned. [This] is the type of project that makes New College worthwhile. It’s the type of project that people envision when they first show up here and someone tells them that there’s this thing we have where you can suggest anything and get a professor to sponsor it.”

Emeritus Professor of Neurobiology Alfred Beulig is sponsoring the tutorial. Beulig has previously built boats with students at the waterfront, and has experience building not only sailboats, but also aeroplanes and housing infrastructures.

After working out the logistics for funding and selecting the boat’s design, students in the tutorial have been working on cutting plywood, painting on epoxy and preparing to implement other parts of the boat’s plans.

“Right now we’re at the really exciting part where it’s actually starting to take shape and look like something,” Chock said. “There’s a strongback that holds the whole thing up while we put it together and we’ve mounted a bunch of frames that give the angles and the hull dimensions on it. The next step will be to take sheets of thin plywood and start bending them around the frame to create the hull of the boat.”

The student-made sailboat will stay at the waterfront after the project is complete so that other students have the option to take it out on the bay themselves and possibly be inspired to undertake a similar type of project.

“I also want it to serve as a reminder to the administration,” Chock said. “Students do really care about this college and the waterfront in particular. As long as the boat is around, we won’t let them forget that.”