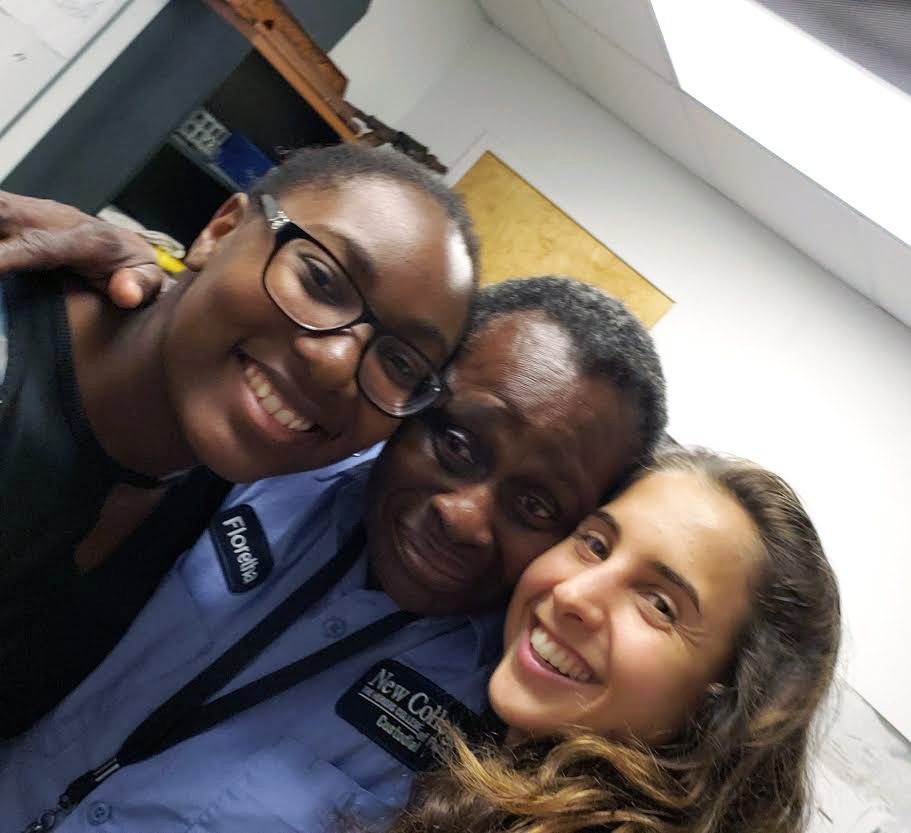 After over a decade of custodial work on campus, Floretha “Flo” Green has formed meaningful friendships with students, staff and co-workers. Green recently announced that she plans to retire this upcoming January and students plan to commemorate the work and positive energy Green has granted the school by pooling together money for a retirement gift. A small party is set to happen with her partnered custodians on Friday, Dec. 6 in Z kitchen. She invites students to this celebration as well for her final farewell.

Green primarily works in housing, specifically tidying the Pei lounges and common corridors of the letter dorms. Additionally, she maintains the elevated walkways in Palm Court. She often engages in meaningful conversations with students during her daytime shifts.

Director of Facilities and Construction Coordinator Alan Burr has been working with New College custodians for six years. Green has been in the later years of her custodial work the entirety of Burr’s time on campus. As a result, Burr’s been able to experience the generosity of Green that many have praised her for.

Green recognizes many students by name on campus through consistent greetings and conversation. She aims to learn the individual story of every student she meets, while simultaneously maintaining campus areas. Burr suggests that her specific job has helped project her natural liveliness.

“The daytime shift that Flo has, likely allowed her to make and maintain friendships throughout the years,” Burr said. “She’s up and running at the same time students are, and in the same places students are. As a result, she definitely interacts with students much more than the staff or anybody else on campus.”

Green’s geniality keeps her close with the student body. Thesis student Hannah Sine befriended Green during her first year at New College. She has recently became very close with the custodian, as Sine began working at the Physical Plant this fall.

“We mostly would chat in passing, and I was always comforted by her warmth and care for me,” Sine said. “She’s always in good spirits, and her presence graces this campus.”

Green got to see Sine grow as a student of New College through her entire four years on campus. With very kind regard towards Green, Sine deems it very important that the upcoming party on Dec. 6 has student involvement.

“ I think it’s important for us to show Flo how much we appreciate her with this party,” Sine said. “The amount of work she has done for the student body must be reciprocated in an event which demonstrates that her efforts haven’t gone unnoticed.“

A forum post was created by third-year Francesca Galliano to invite students to the upcoming celebration of Green’s final goodbye. The event has since been gaining attention across campus. Thesis student Gina Vasquez collected cash and electronic donations to purchase a Visa gift card for Green. Recent alumni also circulated information about the donation on social media.

“I wanted Flo as well as others to be able to celebrate her retirement together, see and speak with her one last time before she left,” Galliano said.

Galliano became especially close to the custodian after attending scheduled meanings with workers on campus led by Alex Schelle (‘13), who wrote her thesis on accountability and forming relationships in a community. It was through these meetings that Galliano got a feel for Green’s kindness and warm regard toward students.

“I have always seen and spoken to Flo as I have always lived on campus,” Galliano said. “Flo has such a lively and social presence on campus. She really cares about the students, who she refers to as her kids, and is always checking in with them.”

Green has been able to establish a familial level of comfort with the students she has formed friendships with. Galliano is just one of several people that feels a special connection with her. There are students, staff and fellow coworkers who never experienced college without her kind spirit and guidance. Green is truly one of a kind and will certainly be missed on campus.

“While I am a bit sad to see her go, I am more happy for her as she will have more time to do things she wants outside of the workplace,” Galliano said. “From what I know, the student body shares similar feelings. Many people adore and love Flo and she will not be forgotten.”