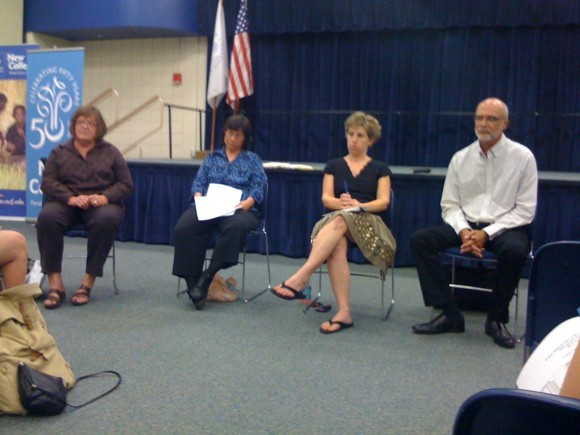 In the wake of a continuing recession, major federal budget cuts and even the downgrading of America’s credit rating, it should come as no surprise to students that New College is facing concern about the future of federal financial aid support. With the recent institutionalization of a “credit unit cap,” students struggle to determine how this unheard of and confusing change will affect them and their abilities to pay for their educations.

In an effort to ease fears and anxieties, four members of the New College faculty with whom this issue has been a primary concern – Provost Steven Miles, Dean of Enrollment Services and Information Technology Kathy Killion, Associate Dean of Enrollment Services Sonia Wu and Director of Financial Aid Tara Karas – attended an academic meeting on Thursday, Sept. 1, hosted by New College Student Alliance (NCSA) Vice President of Academic Affairs, Thayer Warne. Only eight students, including the Catalyst, attended the event.

The main topic that was opened before the panel was about the newly instituted 46.5 attempted credit unit cap. Killion took the time to give the back-story on how and why this change occurred. Every five years colleges have to apply for recertification to participate in Title Four programs. Title Four, part of the Higher Education Act of 1965, allows for disbursement of federal money into financial aid programs, such as Pell Grants and direct loans. It should be noted that this does not include Bright Futures for Florida residents. Unfortunately, when New College submitted its application last year, the United States Department of Education (DOE) official contacted the school saying that they had four concerns regarding NCF’s standard for Satisfactory Academic Process (SAP). The concerns are: 1) NCF does not use credit hours or grades, 2) NCF has no clear standard for good academic standing and progress, 3) NCF has no clear standard for academic probation or dismissal and, thus, 4) NCF has no clearly defined basis upon which it can measure New College students’ SAP for financial aid purposes.

As a result of this audit on New College’s SAP, NCF was forced to come up with an SAP policy for its financial aid recipients that must be as strict or stricter than the College’s standards for good academic standing and it must be based upon a completion ratio of at least 67 percent.

With this in mind, Financial Aid and Enrollment Services staffers began negotiations with the Academic Administration and the Educational Policy Committee to address the concerns of the DOE. NCF was assigned program improvement specialist Laura Hall, who, while never actually visiting the campus, has the authority to determine the status of NCF’s future financial aid status based on the changes in SAP policy.

“They basically put [New College] on probationary status […] Well, ‘provisional certification status,’ and, in fact, [New College is] still on it and [has] to submit a new application by the end of March, and then [the DOE] will take official action,” Killion informed the assembled audience.

Some students wondered why this was a new concern on the DOE’s end, because New College has been awarding financial aid based on its own SAP for so long. The answer came in the form of how the national definition of a credit hour was being determined, as well as federal audits on how tax payer money and federal funding is really being spent.

“While [these regulations] are affecting [New College] and every other college and university in the country,” Miles explained. “It’s safe to say [they] are coming from the for-profit sector, where institutions get the money but their student’s aren’t getting the government’s money’s worth.”

However, the true question remains: how does this affect the New College student? The answer, while not short or simple, is at least understandable, given time. As it stands, New College students require 31 credit units in order to graduate with their liberal arts degrees. Credit units are determined by taking the number of credit hours a student is taking or has taken and dividing that number by four. The 46.5 attempted credit unit cap — figured by taking 150 percent of the needed credit units to graduate — dissuades students from taking frivolous or unnecessary classes, as well as dropping or failing contracts because, in the end, it will affect their financial aid. Dual enrollment credits, transfer credits, study abroad, Independent Study Projects (ISP) and dropped classes all count as a student’s attempt towards the 46.5.

Many of the students who attended the Academic Meeting were concerned about losing financial aid because they are taking — and satisfactorily completing — contracts with six or more classes, which, taking into consideration the average of 8 contracts for graduation, has them losing their financial aid before the start of their last semester. While the program seems far from perfect, the panel agreed that graduating within the attempted number and thus maintaining financial aid is possible.

“It seems like the feds are subverting the educational process here,” Wu admitted. “But if people don’t meet the Standard, they aren’t going to get their aid, and I am very interested in people getting their aid. Although I don’t think two-thirds is some magic number that means everything is educationally wonderful, I want to make sure people can get their aid.”

The secret to success with this policy seems to be to get to know and understand the system. An appeals policy does exist in which students can plead their case for continued aid beyond the 46.5 marker, but the panel was quick to say that double majors are not necessarily a viable excuse to the DOE. However, in an interview before the panel, VP of Academic Affairs Warne stated, vaguely but with conviction, that while the NCSA and all of the encompassing campus services who have been dealing with these changes are disappointed with the limitations it causes students, there may yet be hope for the extreme overachiever.

“[These changes are] problematic, but NCSA is working with the administration to, shall I say, do what we can to make sure students do not feel limited.”