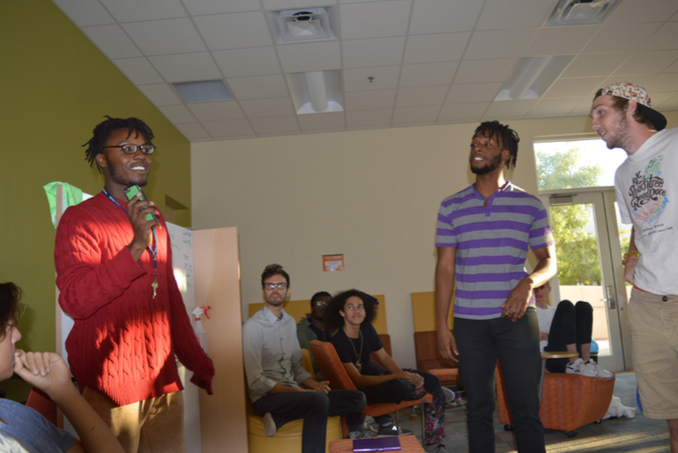 Classrooms have rarely gotten so loud. As bars and burns are flung in the air and beats played from a borrowed Fishman acoustic amp lead class discussion, it’s easy to forget that this is all for academic credit.

Classic Freestyle and Floetry Tutorial is commonly referred to as simply Freestyle Tutorial. It started off as a four-student project sponsored by Professor of Classics Carl Shaw. In its third semester, is a weekly tutorial led by New College Student Alliance (NCSA) co-President Miles Iton that meets in Ace Lounge from 5 to 6 p.m. Midterms occurred on Monday, Oct. 24, where students were expected to freestyle for several minutes in front of the class and then freestyle against each other with an entire classroom as an audience.

The tutorial, which has generated a cult following, began when Shaw recognized one of his students in a video for another student’s Independent Study Project (ISP).

“[Third-year student] Michael Pulsifer made a video of New College students doing New College things and Miles [Iton] was on it, as I would say, spittin’ poetry,” Shaw said. “We started talking, and he and Paul [Loriston, third-year and fellow NCSA co-President] approached me about doing a mod tutorial on rap and hip-hop and I was excited to support them, since rap is one of the few places that poetry still thrives.”

Shaw describes rap as an extension of poetry.

“The rhythm, the beat and the expectation of flowing to the beat,” Shaw said. “A lot of what happened today incorporated flow and the use of it in interesting ways, you can come up with an infinite amount of ways of saying something, and that’s where the art in it is.”

Shaw is the academic facilitator while Iton has taken on the role as a performance facilitator. Students can opt to receive either mod or full semester credit depending on whether they want to take the beginner or the advanced level of the class. There are weekly readings for all students and weekly compositions for students in the advanced level. Shaw and Iton are preparing for a public performance to take place at the end of the semester at the Four Winds Café.

“Rap is a fantastic vehicle for discussing literature, poetry, genre and all of those fantastic elements that go along with studying literature,” Shaw said. “One of the readings we discussed this week also dealt with social issues, race and sexuality. It’s actually a fantastic medium for conversation and dialogue among all the students.”

Iton sees the tutorial as a way to educate his peers on the history of a genre of music that started off in the Bronx and has become a worldwide phenomenon.

“[The best part is] not only seeing people be savage, because that’s always fun, but being able to give people a background to hip-hop,” Iton said. “ We talk about everybody just kinda jammin’ with the lyrics and listening to have fun but to be able to show the real-world connections and giving an accountability that it’s not just here for you to turn up and enjoy but you still gotta see the substance and the history.”

The class also attracts students who aren’t enrolled in the class, who come to still be a part of the fun.

“It’s fun to see what people bring to the battles, especially since some of them are my friends,” third-year student Nathan Burnaman, who is not a part of the tutorial but attends the class from time to time, said.

Burnaman was also the student who lent his amp to be used for midterms evaluations. The tutorial currently receives no funding from the school. At the moment, Iton is working on applying to the Council of Academic Affairs for music equipment and decorations for Ace Lounge.