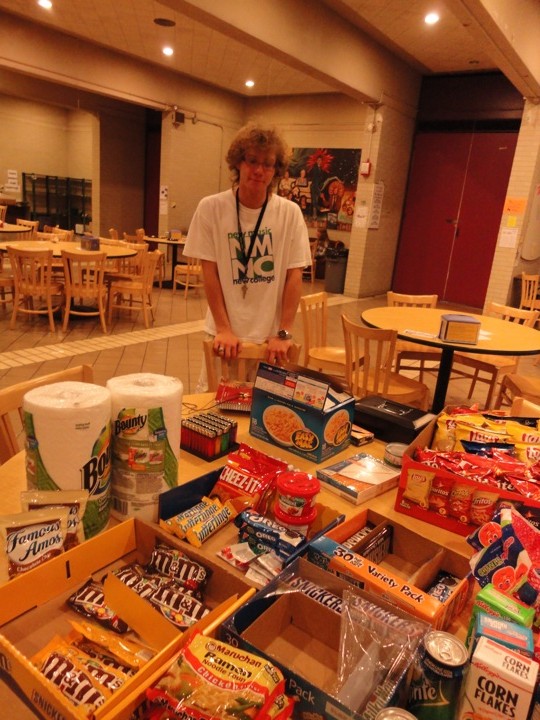 A new late-night convenience store is running on campus in Hamilton “Ham” Center. Called the C-store, the set up is a table in Ham that holds drinks, snacks and also pens, stamps and lip balm. The prices are set lower than the cost of buying the snacks from a vending machine and the store is open weeknights from 11pm to 2am, with weekend hours to be determined.

First-years Kyle Saunders and Jonathan Waidele opened the C-store on April 4. “Mike Long had the idea to set  it up, but didn’t have the time,” Waidele explained. “So he came to me because he knew I wanted to do something with business … and I turned it into my ISP.

The store was supposed to open at the end of January, but setting up the store went differently than Saunders and Waidele envisioned. “Originally, the intention was for it to be financed by the school,” Waidele said. “However, the top dogs refused to finance it and that’s because there’s a bylaw that does not allow [the college] to. Supposedly it would be a double tax because [the college would] be giving us money from the students, but then the students would have to use their own money again to buy things.”

Instead, the two financed the C-store themselves, with permission from General Manager of Hamilton Center Jerry Dixon. “The initial cost, which we split between the two of us, was about $314,” Waidele said, adding that they have made about $100 in revenue so far. “I actually haven’t made a cent from the store yet because the money we get … we use that money to restock, to grow. At the end of the semester or at some point we’ll divide some profits that we decide between the two of us.”

The two buy most of their supplies from Sam’s Club, according to Waidele. Most candies, chips and sodas are 75 cents, while Ramen Noodles and Cheeze-Its, stamps and cereal are 50 cents and some items have the listed price of “cheap,” which Waidele said means there is room to haggle. “We don’t sell it to you as cheap as we got it but we dont’ mark up the price a lot,” Waidel said. “It’s definitely reasonable.” Some students have been selling homemade food via the C-store, setting their own prices on what they make. “If they want to give us a cut, they can, but they don’t have to,” Waidele said.

Waidel said this semester is a trial period for the C-store and that they hope to get more student input on what items to sell. “It’s affordable, it’s here, you don’t have to go to Shell which is sketchy as hell. And a lot of it is cheaper than the Shell,” Waidel said. Because sales ran slow on their first weekend, Waidel said that unless students say otherwise, he and Saunders are considering closing the store during Wall times.