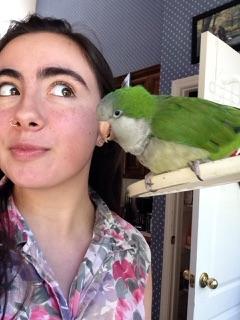 For some, time at home may pale in comparison to life on campus, but one thing that most can take solace in amidst virtual classes, loud siblings and fights with parents is pets.

On campus, curious passersby often peeked into third-year Calypso Habermehl’s first floor Dort room to steal an admiring look at Habermehl’s Emotional Support Animal, Jello. Now that Habermehl is home with family, their spunky orange tabby’s antagonistic relationship with their parents’ cats, Carl and The Dude, has come to a head.

Carl and The Dude, whose name is a reference to the 1998 film “The Big Lebowski,” are fairly recent arrivals to the household. Habermehl’s parents adopted them nine months ago and ever since the cats have waged war.

“It’s a constant competition for who’s going to be the center of attention every day,” Habermehl said. The three felines have huge personalities that tend to clash when Jello is at home because, no longer the eternal subject of Habermehl’s adoration, “Jello gets a little jealous.” Needless to say, the three cats’ relationship is somewhat tenuous, but lately the Habermehl household has been making do.

“My parents are both working from home right now, so during the work day the cats will spread out so that Carl is cuddled up with my dad, The Dude is in my mom’s office, and Jello hangs out with me,” Habermehl said. The new normal of quarantine may be the catalyst that settles those old qualms or, at least, puts them to rest for a while.

Meanwhile, across the coast in Austin, Texas, thesis student Lili Benitez has been happily tormented by her free-flying, house-ruling Quaker parrot, Quaker, since coming home for Spring Break.

“It’s a wild ride having a bird, especially in the way that my family does it,” Benitez mused.

Most bird owners keep their avian companions in cages or clip their wings, but when Benitez was eight years old and her family acquired Quaker, her mother clipped his wings, as was recommended, but felt awful afterwards and hasn’t done it since. Now Quaker is the “king of the household:” the parrot crawls around on the floor, climbs up tables and flits around the house, sometimes dive-bombing the occasional stranger, and one time, her cousin. Benitez said Quaker also antagonizes Benitez’ dad, although he adores Benitez, her sister and her mom.

Benitez desperately wanted a hamster as a child, but her mom disliked them because the small mammals are nocturnal and can be loud and unruly at night. So somehow, instead, the family thought a parrot would be a wonderful substitute—“because that’s less maintenance!” Benitez laughed sarcastically. Benitez said she loves Quaker, although now that she’s older, she said she doesn’t believe that exotic birds such as parrots belong in people’s homes and wishes he could live in his natural habitat in a tropical rainforest.

Ka, thesis student Ellie Bullen’s baby ball python, may be just the opposite of Quaker’s rambunctious and sassy personality. Sanguine, adorable and “chill,” although sometimes an escape artist, Ka is Bullen’s “little sweetie” who eats live mice and is the subject of curiosity and affection of all of Bullen’s friends.

“I feel like a lot of my friends were nervous at first, but once they held her and got to know her you could see they realized she’s super harmless, especially now as she’s still a baby,” Bullen said.

Pets tend to be what people miss the most when they’re far away from home, and now, for better or worse, students are spending inordinate amounts of time inside with their furry (and not so furry) friends.