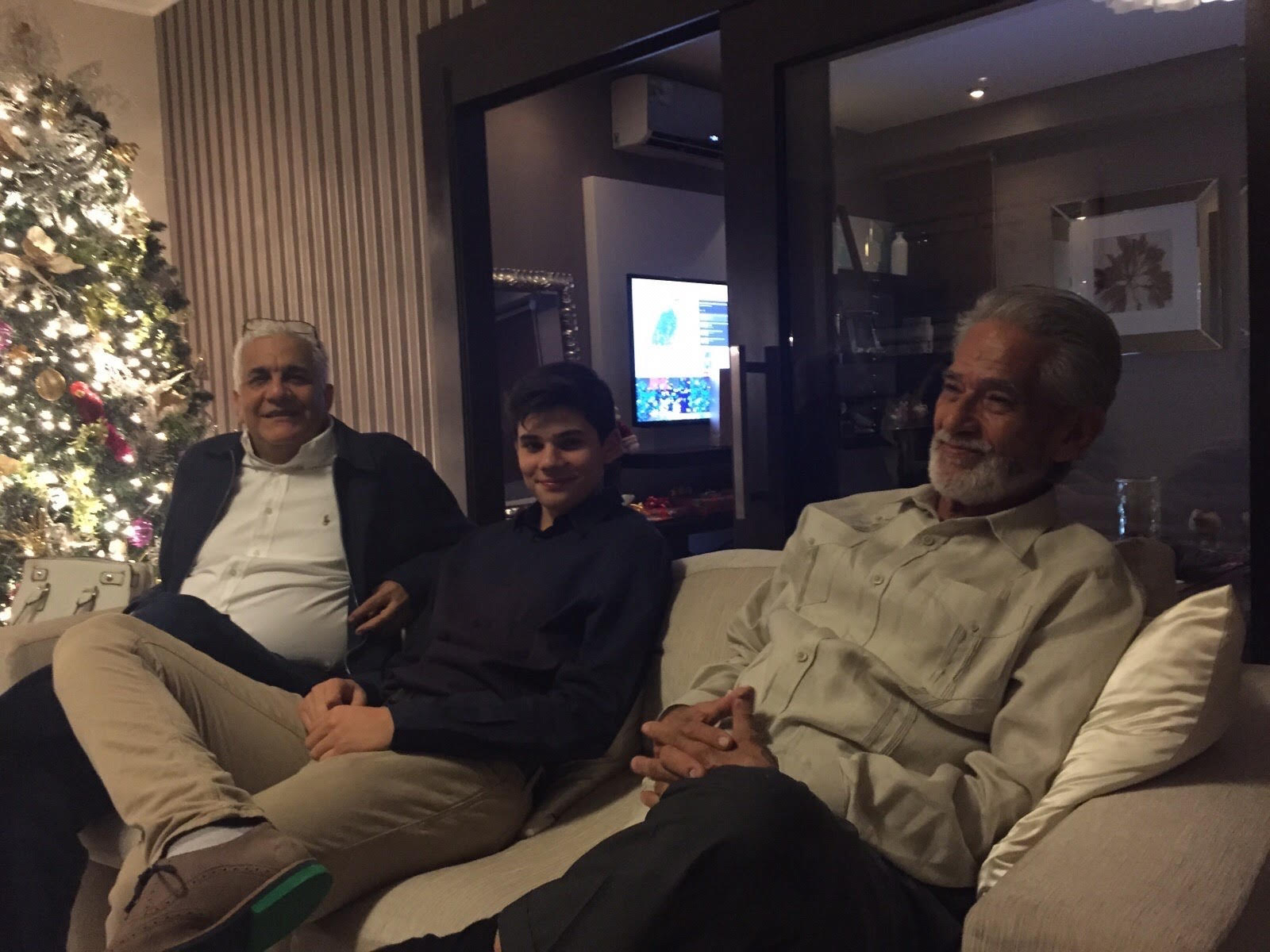 Guerrero and his grandfathers enjoy each other's company during a Christmas family get-together.

Students are neck-deep in finals, which leaves many of them fantasizing about returning home for the holidays. Returning home conjures up childhood memories of family get-togethers, making the holiday season one filled with nostalgia. The Catalyst talked to a few students about their holiday plans as they prepare to return to their hometowns.

Third-year Marena Long is from Telford, Tennessee. Telford is a relatively small town, with a population of approximately 600 people.  Long lives on a farm with her family and her grandparents are her neighbors.

“For Thanksgiving, my friend and I run a race in Johnson City called the ‘Turkey Trot’ and it’s a 5K,” Long said. “We run three miles in the cold and we get a little medal and a t-shirt.”

Preparing the food for Thanksgiving was a family affair for Long.

“We weren’t allowed to eat a huge breakfast or lunch because of all the food we would eat at dinner,” Long said. “We do the whole turkey, dressing, cranberry sauce shabang. If there’s not pumpkin pie, then people would riot.”

“My mom plays songs on the piano and I have cousins that are pretty good at the guitar and can sing, so we all sit and listen to them,” Long said. “It’s always really country Christmas music, but I’d say music is a [big part of Christmas] for us.”

Third-year Annabelle Wilson grew up in the small town of Dade City, which is just north of Tampa.

“I was born in Tampa, but I moved to Dade City in kindergarten,” Wilson said. “We moved into a small house that was supposed to be temporary, but it’s the same house that we live in fourteen years later.”

Wilson described her neighborhood as very close-knit, explaining that she knows all her neighbors well after fourteen years.

“I’ve always been called a ‘city girl’ by my friends because my road is paved,” Wilson said. “I live really close to one of the few stoplights in town, so I’m the city girl. All of my friends live in the backwoods and on farms with dirt roads. It was sort of special that I was able to have neighbors near me when all of my friends lived acres apart.”

Wilson spoke fondly of holidays. Her family usually travels to her grandparents’ house for Thanksgiving and to Nashville, Tennessee for Christmas and New Years Day.

“For Christmas, we skedaddle,” Wilson said. “We do not stay and I’m really glad about that because I hate warm Christmases. We wake up really early and do a small family Christmas with just my immediate family and then we go to my grandma’s house. She is our only relative in Dade City so we eat brunch with her.  From there, we go to the airport and head to Nashville.”

“The major event is Church Street Christmas,” Wilson said. “On the weekend before Christmas, people go all out and all the houses on that street decorate to the max. People set up hot chocolate stands and there are church choir performances.”

Third-year Omar Guerrero grew up in Santo Domingo, the capital city of the Dominican Republic.

“[My childhood] was pretty good,” Guerrero said. “I used to go to the countryside a lot because my family has a farm in the south. I used to spend a lot of time there eating mangos and things like that.”

Guerrero also spent a couple years living with his father in Miami during elementary school.

“We lived in Doral, which is a suburban area of Miami,” Guerrero said. “It was way different than Santo Domingo. I played outside a lot and rode my bike all over Doral and I went trick-or-treating for the first time in Doral, which was so fun.”

This year, Guerrero is planning on going to Miami for Thanksgiving, where his sisters will travel from Santo Domingo to spend the holiday with their father.

“[Thanksgiving] wasn’t really a big deal growing up, but as I’ve gotten older my mom has started doing Thanksgiving dinners,” Guerrero said. “I have to give a speech every year and say prayers sometimes.”

This will be one of the first Thanksgivings that Guerrero will not spend in Santo Domingo. Guerrero plans on going back to Santo Domingo for Christmas break.

“I really like [Christmas in the Dominican Republic],” Guerrero said. “I used to go to my grandfather’s house and we had the whole family there. My grandfather had a really big house, which was cool for us because I always lived in a city apartment. We got to play on the patio and go upstairs and run around.”

Guerrero has not had as many chances to be with his family as he has gotten older, as he is in Sarasota, his father is in Miami, his mother is in Santo Domingo and his sister is studying in Spain. Holidays provide a time where the members of his family are able to come together.

“It’s just nice being with family,” Guerrero said. “That’s something that I haven’t really gotten to do since I’ve become older because my family is spread out. We eat a lot, too. We have the standard Christmas foods, except with rice and beans.”

Guerrero spoke about the differences between Santo Domingo and Sarasota.

“When I’m here in Sarasota, I don’t really celebrate Christmas,” Guerrero said. “People here aren’t very Christmas-y. I feel that in order for me to have Christmas, I need to go home.  When I go home, I’m with my family and my friends from high school, so it’s very different.”