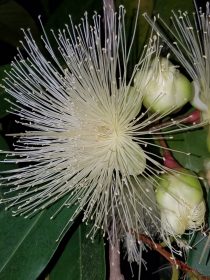 The glistening, royal violet skin of ripe mulberries greets curious foragers viewing the first frame of third-year Kendall Southworth’s interactive edible plant library, which was officially published on the New College website in February. The edible plant library is the combination of an interactive map and a library of ecological knowledge, lush with personal stories and poetry submitted by students and alumni as well as the natural history of each of the edible plant species around the New College campus.

Visitors can click through the map and virtually visit each location with a species of edible plant while simultaneously viewing photos, reading creative submissions and natural histories of each species. Some notable fruiting plant species in the map include Malay Apple, Lychee, Tamarind and Imbe, the last of which is one of the rarest fruits that can be found on campus.

Southworth said that she recognized early on that she deeply valued a relationship with nature “that isn’t just based off of what you can get from it, but mutual connectedness and exchange.” As Southworth’s time at New College grew longer, she developed an intimate knowledge of the campus environment and “realized that there was this disconnect fundamentally between the campus community and this landscape that we are a part of, whether we’re conscious of it or not.”

Southworth’s inspiration for the edible plant library was the need to address that disconnect and to preserve fundamental oral knowledge about the New College environment in a permanent way that would be accessible to future generations rather than isolated within the circles of “a small handful of Environmental Studies AOCs who survive off mulberries and only wear Birkenstocks.”

The wisdom and traditions that make the New College community so special are most commonly spread through this kind of student-to-student storytelling. Southworth recognized that while oral tradition has its place as a cherished avenue of knowledge-spreading among the campus community, it could also be limiting, circulating within closed groups and, if not spread to others, “lost to the four winds.”

Originally Southworth planned to create signs for each of the edible plant species around campus, but after speaking to Physical Plant Facilities Planning Coordinator Angela McTigue (’19), Southworth decided to pursue the project in a digital format using her prior knowledge of the interactive mapping software StoryMapJS. The software includes the ability to feature photographs and information about each of the edible plants and, incorporated into the website, represented an opportunity to have a longer-lasting, dynamic resource for campus natural history.

Max Kucera and other students and alumni suggested Southworth ask for submissions of personal stories, poetry and anything else inspired by the edible plant species on campus, which Southworth accomplished by calling for submissions on the Forum and reaching out to NCF Daimon, an alumni Facebook page. Southworth received almost 100 responses, ranging from alums describing fond memories with specific species, such as the mulberry trees, to congratulating Southworth’s initiative as a necessary, beautiful project a long time in the making.

Past students, such as Orion Morton (‘13), have also created edible plant maps for the New College community. Morton’s 2015 map was made using ArcGIS and included edible leaf vegetables as well as fruit trees. Many of the species are still there, and Southworth’s map has incorporated and expanded the scope of Morton’s in order to create a more comprehensive collection accessible for student use.

As more and more students and alums submitted their stories, Southworth’s interactive edible plant library came to fruition as the readily-accessible web page that students can access today, because, as Southworth emphasized, “it’s not just about the knowledge I’ve gained and can share, but it’s this entire community interaction” creating and preserving sources of ecological knowledge and community stories that might otherwise be inaccessible.

One such story, Steven Lubka’s (’13), took place in the Northeast backyard of the Four Winds Café, which is home to a special collection of 10 mango trees planted in the shape of a star. The mango trees were planted to honor and remember Kit Reilly, a well-loved, mango-loving former New College student who passed tragically in 2003. Lubka’s story is included below:

“My first summer I stayed in Sarasota I discovered something magical. When I walked past the Four Winds I saw a cornucopia of mangoes glistening bountifully in the summer heat. As one of my favorite fruits, a quick current of joy lit me up as I immediately sought to find a way to pick some of them. I realized there were several different varieties, the normal ones I was used to buying in the store and a variety I had never seen in the shape of a crescent. The crescent shaped ones would become my new favorite mango. I got an extendable fruit picker and went to work at the joyous and nourishing takes of gathering from one’s environment. Biting into those juicy mangoes, warm from the summer heat, is one of my favorite memories.”

Southworth’s guiding ethos of a “compassionate development of a conscious relationship with the land that cradles and provides for us” can help to inform future students of the responsibility to be responsible stewards of themselves, and of the natural world. In the future, Southworth plans to include a thread below the StoryMap for anyone to go on the website and submit content for others to see, “like” and learn from. Southworth said that after she graduates she hopes another student could be appointed as steward of the thread in order to preserve and update the interactive library as the campus landscape changes.

“I just hope that this project is an illustration of how, if you feel called to do something on this campus, it is so within your capability” Southworth said in reference to the overwhelming support from alumni, students and the office of communications and marketing, which facilitated the project’s incorporation into the New College website.

“Not only is it in your capability, it is actively encouraged—not only by other members of the peer community but by the hundreds of alums that are willing to do whatever they can do support you, and in those upper channels, too, those individuals also recognize that this is valuable,” Southworth reflected. “All of that is possible.”

In the coming months, Southworth’s interactive plant library will continue to be updated with more information, plants, and creative submissions. An extension of the map to include the Food Forest and the Caples campus flora is also in the works. In the meantime, students can access the interactive map at https://www.ncf.edu/plant-library/ .