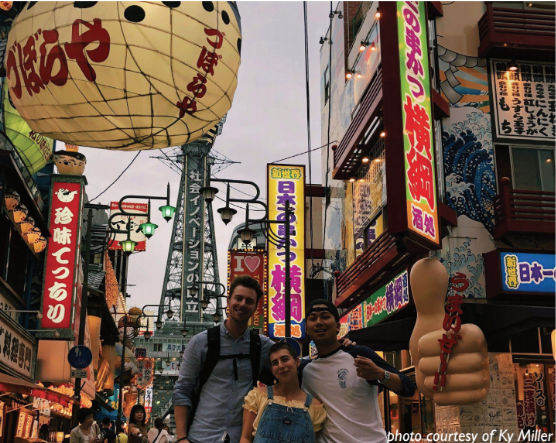 The college experience is often defined by the insights obtained during the academic year, but summers in between can be just as illuminating.  This summer, numerous students took part in summer programs across the world: here are stories from six of them.

“It was really hard at first working with human tissue because they were real people and I felt the pressure of messing up, but in the end it was rewarding to be able to make a contribution to science and to help people,” Lafond said.

This internship allowed him to develop skills in microscopy and slide-staining, which are both relevant to his thesis about parasites.

Third-year student Caroline Newberg volunteered at Kingsley Plantation, a national park on the Timucuan Historical and Ecological Reserve in Jacksonville, Florida.  Her main task was to write material covering the Timucua, a Native American group that lived in the Jacksonville area prior to European colonization. She also interacted with visitors and tourists, giving her the opportunity to share her newfound knowledge.

“I enjoyed meeting people from all over the world and sharing our own little part of history with them,” Newberg said. “Kingsley Plantation used slaves for much of its history and is an important archaeological site for researchers studying the legacy of African culture in the reality of African slavery. Many people came to the Plantation with misconceptions and international tourists who knew very little of American slavery would visit as well. I found educating people very enjoyable.”

Thesis student Mairead Howley worked as a counselor at El Lago del Bosque, a Spanish language immersion camp in Bemidji, Minnesota. El Lago del Bosque is one of 15 language camps run by Concordia Language Villages. Other languages offered include Chinese, Norwegian and German. This camp functions as a language and cultural immersion program, where English is rarely spoken and campers focusing on their target languages. Howley built friendships with her campers and enjoyed helping them improve their Spanish.

“For me, the most rewarding part of the summer was developing relationships with villagers and watching them gain more confidence in themselves,” Howley said.

“It was a joy to get to know my casa (cabin) each session and watch and help them work out a successful group dynamic and it was especially inspiring to see villagers support and encourage their friends in learning and using more Spanish.”

Howley intends to include her experiences from this summer in her thesis about second language acquisition.

Third-year student Ky Miller spent a semester abroad in Tokyo, Japan from late April through early August.  While abroad, she was situated very close to the heart of downtown Tokyo, enabling her to be deeply immersed in Japanese culture.

“The most rewarding part of my exchange period was being forced out of the bubble of life in America by learning and adapting to different cultural practices, and by making silly mistakes, such as gesturing wildly with chopsticks while telling a story, or laughing too loud on the train with friends,” Miller said. “Those mistakes were extremely valuable to me in situating myself and my habits within Japanese cultural life and allowed me to become much more self-aware.”

She said her favorite parts of the program were “getting hands-on lab experience, learning about research in psychology, getting experience in data science tools such as R and Python and exploring Madison.”

She encourages Psychology AOCs to consider applying to the program in November, and would be happy to answer any further questions or to help in general anyone interested in applying.

Third-year student Benjamin Valen attended the Duke Talent Identification Program (TIP) at Davidson College in Davidson, North Carolina.  While there, Valen studied psychology and cryptography as part of the six-week course. They took on the role of Residential Counselor (RC), which proved to be one of the more rewarding aspects of their experience.

Valen thoroughly enjoyed “working as an RC and being able to get to know each of [their] assigned residents.” Valen looks forward to applying what they learned to their academic life at New College.