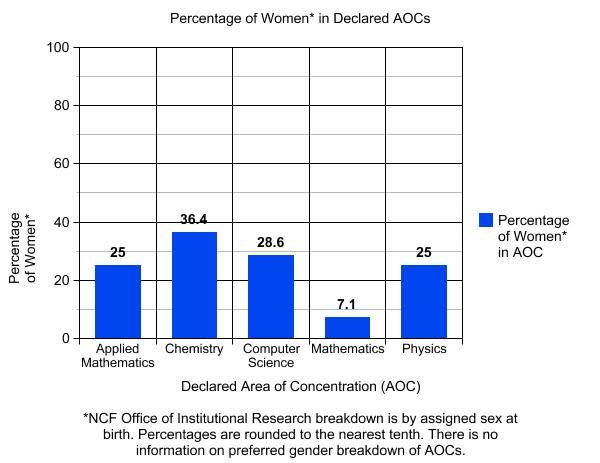 The following graph highlights the percentage of women in AOCs in STEM during the 2014-2015 school year. Anya Maria Contreras Garcia/Catalyst

According to the Census Bureau’s 2009 American Community Survey (ACS), women only comprised roughly 24 percent of science, technology, engineering and mathematics (STEM) workers in the country. Non-cis male representation in STEM continues to be a central concern in academic communities as a result. Next semester, first-year, Haley Bryan, and third-year, Hana Arraya, hope to do their part to increase the percentage of underrepresented genders in STEM fields at New College by reviving STEMfemme. The club was originally created by Neurobiology student and alum Paige Leary (’12) who sought to encourage students of underrepresented genders to pursue careers in STEM fields.

“STEMfemme is a platform for students who want to pursue a career in either science, technology, engineering or math, while maintaining an emphasis on female leaders in these positions because that usually goes overlooked,” Bryan said. “So we just want to provide a supportive basis for kids to know that they’re not alone in this club and they shouldn’t be discouraged by any obstacles that come forward.”

Bryan, Arraya and first-year, Ella White, also plan to work with Courtney Hughes at the Center for Engagement and Opportunity (CEO) to help club members find internships and Research Experience for Undergrads (REU) programs within their field by creating different student representative positions for each Area of Concentration (AOC) in the STEM field that is offered at New College.

“The idea would be that the person that is assigned that leadership position within the club will be responsible for meeting with Courtney [Hughes] on their own time and finding out early on before November, when a lot of REUs are starting to open up their applications,” Arraya said. “They will be a valuable resource for anyone that wants an internship.

“One thing that’s really unique about this club is that we’re trying to get as much of the club members into leadership positions as possible, so the responsibility is distributed evenly. The idea would be, if someone came to STEMfemme and said ‘Hey, I’m a Bio major, I want to do an internship in the Greater Sarasota area for ISP,” then they should be able to talk to our Biology Representative.”

The club will also present an opportunity for students to interact with female faculty members and demonstrate clear interest in their field outside of class, while also hearing about their perspective as a female in their career.

“New College kids are impressive and I just think that they want a good outlet to express their capabilities, and show [faculty] how interested they are,” Bryan said.

Other events and activities held by STEMfemme will include a field trip each semester and inviting guest speakers from underrepresented genders in STEM fields to present their research and experience in their field. The club also plans to eventually reach out to research facilities in major universities in order for club members to make off-campus connections.

“We want to make those opportunities really accessible, not just limited to members of the club,” Arraya said. “If we have a guest speaker come in, the whole school is going to be invited.”

“It’s going to be really structured, and we’re going to have a really solid plan of action that people can use later on for their pursuit in a career,” Bryan added. “People that join this club are going to have tangible benefits that they can see later on, and apply to what they are doing later on and find a pathway to opportunities that sound really good to them.”

Students interested in joining STEMfemme can email Bryan and Arraya for more details about the club, which will be returning next semester.