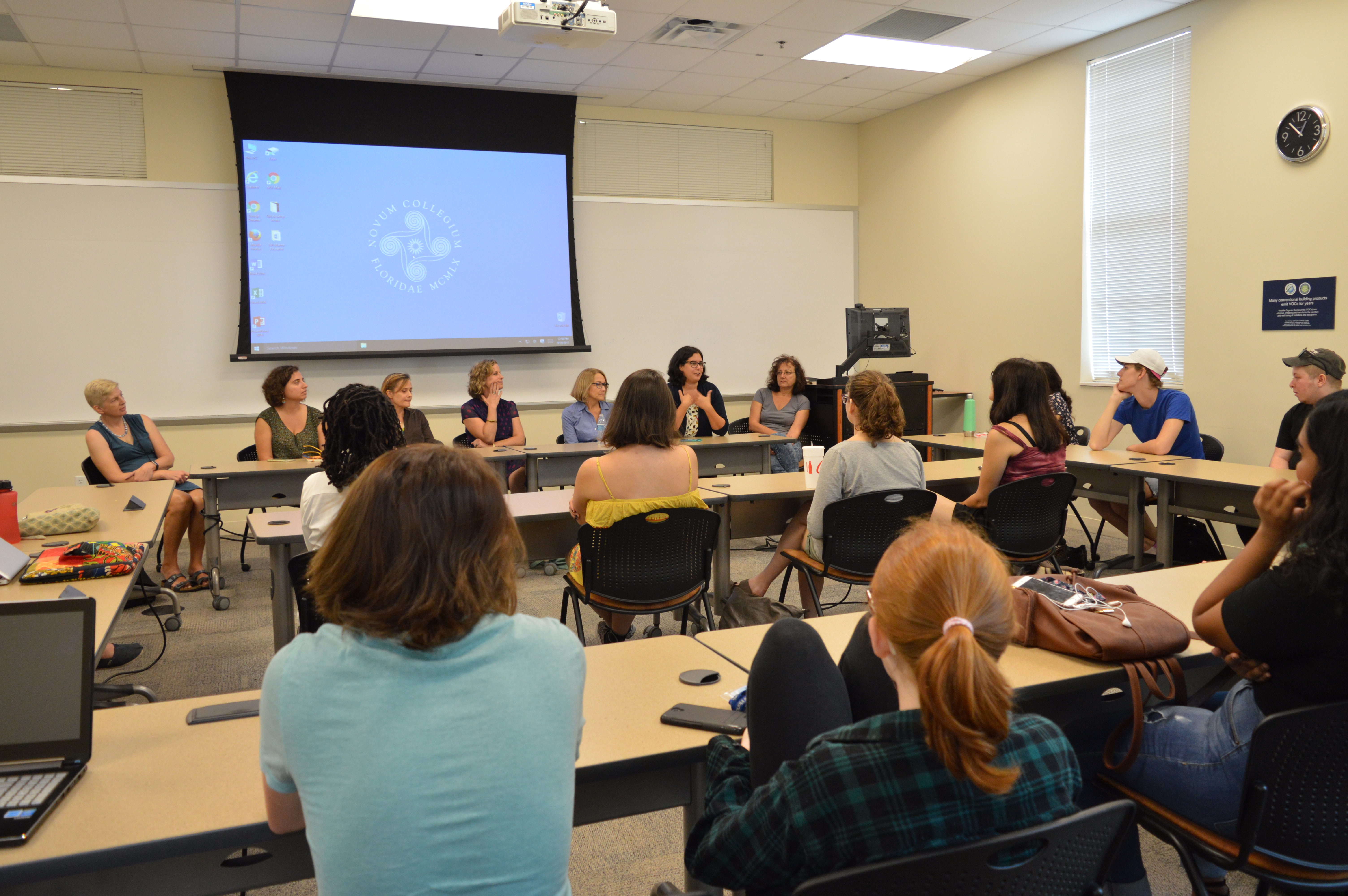 The first Feminist Friday of the semester was attended by students and faculty from different disciplines.

Seven well-revered women faculty sat in an Academic Center of Excellence (ACE) classroom at the first Feminist Friday of the semester to discuss their experiences as women in science, technology, engineering and mathematics (STEM) fields. STEMfem-inist friday, organized by STEMfem.–a student club which serves as a motivational resource for underrepresented students who wish to pursue a career in STEM fields–provided an interdisciplinary space for women faculty to engage in dialogue surrounding gender-based discrimination and to share how they overcame such obstacles.

A common theme throughout their stories involved sexism experienced on the job market, in the field, in research labs and steps students should take to overcome obstacles and reassure themselves.

Professor Clore brought up implicit forms of sexism in the classroom, and observed that often female students are expected to volunteer to take notes or complete the paperwork for the group. She also shared a double standard that she experienced when working in the field as a mother.

“There was this double standard of, ‘you’re supposed to be here all weekend,’ and also, ‘where are your kids?’” Clore said.

Professor Sherman worked in a research group that she recalls being predominantly male. She remembers only two women in the group of 20. She eventually transitioned from an explicitly sexist postdoctoral experience to New College.

“I was trying to get out of there as quickly as possible so the transition to New College was just wonderful,” Sherman said.

Professor Walstrom, speaking to female STEM students in attendance, had one word of advice.

Most other professors echoed Walstroms advice and credited those female and male mentors who were not implicitly or explicitly sexist, those who often assisted them through difficult times.

According to the National Girls Collaborative (NGC), college-educated women make up half of the total workforce, but only 29 percent of the science and engineering workforce. Furthermore, women scientists do dominate some disciplines, such as the social sciences (62 percent), but very few are in engineering (15 percent) and computing and mathematical sciences (25 percent).

Interestingly, these disparities are absent in K-12 education, except among girls of color and girls from lower socioeconomic classes. The National Science Foundation (NSF) reports that “female students’ achievement in mathematics and science is on par with their male peers and female students participate in high level mathematics and science courses at similar rates as their male peers,” except for in engineering and computer science courses.

Gender disparities begin to emerge in higher education, especially for minority women. Women earned 57.3 percent of bachelor’s degrees in 2013. More than 50 percent of women receive degrees in the biological sciences, but only 17.9 percent major in computer science and only 19.3 percent in engineering. These numbers are even slimmer for minority women, who are awarded only 9.7 percent of degrees in the biological sciences and 3.1 percent in engineering.

During the STEMfem-inist Friday panel, Professor Dogucu addressed these disparities and told the audience that we must look at these issues through an intersectional lens because clearly some are more well off than others.

These statistics illustrate the importance of such events.

“This event is important because it is a personable, inspirational and exciting way to hear our faculty’s perspectives of getting to a high-ranking and well-respected position as a woman in a STEM field,” Haley Bryan, second-year and president and second-generation founder of STEMfem., said in an email interview. “Hopefully this opportunity to hear the journeys of our professors will inspire us students to overcome any obstacles we might face on our own academic journeys.”

Students were not the only ones to benefit from an interdisciplinary event like this one. Katherine Brion, professor of art history and current coordinator of Feminist Fridays, thought that such integrative events are valuable for practical reasons.

“The more we’re able to look at a particular topic or problem from multiple perspectives, the better we’re informed and, if necessary, able to think of creative solutions,” Brion said in an email interview.

Information for this article was gathered from ngcproject.org and nsf.gov.