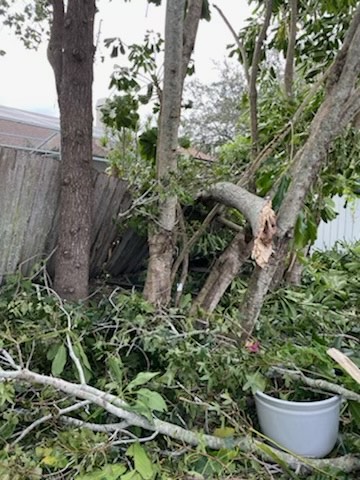 For the people who rode out Hurricane Ian in New College’s beautiful home city of Sarasota, Tuesday, Sept. 27 was the unsettling calm before the storm Floridians know too well—it was the day for preparations. For me, that started with trips to get gasoline for generators in overflowing gas stations. Part of me thinks that BP has a weather control machine like Cobra, the way that hurricanes turn gas stations into the busiest places.

Ten miles away from campus now, that trip was followed by coming to set up “protective measures” for our windows, which is a fancy way of saying plywood. After covering most of my windows with plywood, the backyard was our next area of concern.

My mom being the person she is—someone who can’t sit still—has spent the past few months decorating the backyard with plants and furniture, all of which had to come in for the storm. After filling the living room with potted plants and shoving tables into the garage, my house was prepared as it was going to be for Hurricane Ian.

Next was preparing my great aunt’s house for the storm, additionally ten miles from campus. As her house has better amenities for dealing with a storm, we chose to stay there. Screwing on wind shields and putting up a lanai cover went smoothly, and the generator was ready to go for when we would lose power.

Funnily enough, when the storm started was when things calmed down for me. When it got dark, the wind and rain picked up and I found myself sitting on the covered lanai on a recliner watching the storm.

And what a beautiful show it was. It sounds insensitive to say this, but I was captivated by the storm raging on the other side of the lanai screen the same way fire has an entrancing allure.

In the end, Sarasota avoided most of the damage from the hurricane and is dealing with mostly unearthed trees and power outages. I was as lucky as the rest of Sarasota with the extent of my woes being a fallen tree branch that crushed my fence and a lack of power for four days. However, the sense of community that arises after natural disasters prevailed, and neighbors possessing a chainsaw were happy to help us remove the fallen tree from our yard.

This storm, like all others that will come in the future, should remind us of the importance of mutual aid in situations where the federal government is not there to help.Stay active on the forum and in your community to help the way that is best, directly no middle men NGOs. Sarasota was beyond lucky to escape the damage we have seen south of us, the unpredictability of hurricanes ensures a need to stay informed throughout the entire hurricane season.