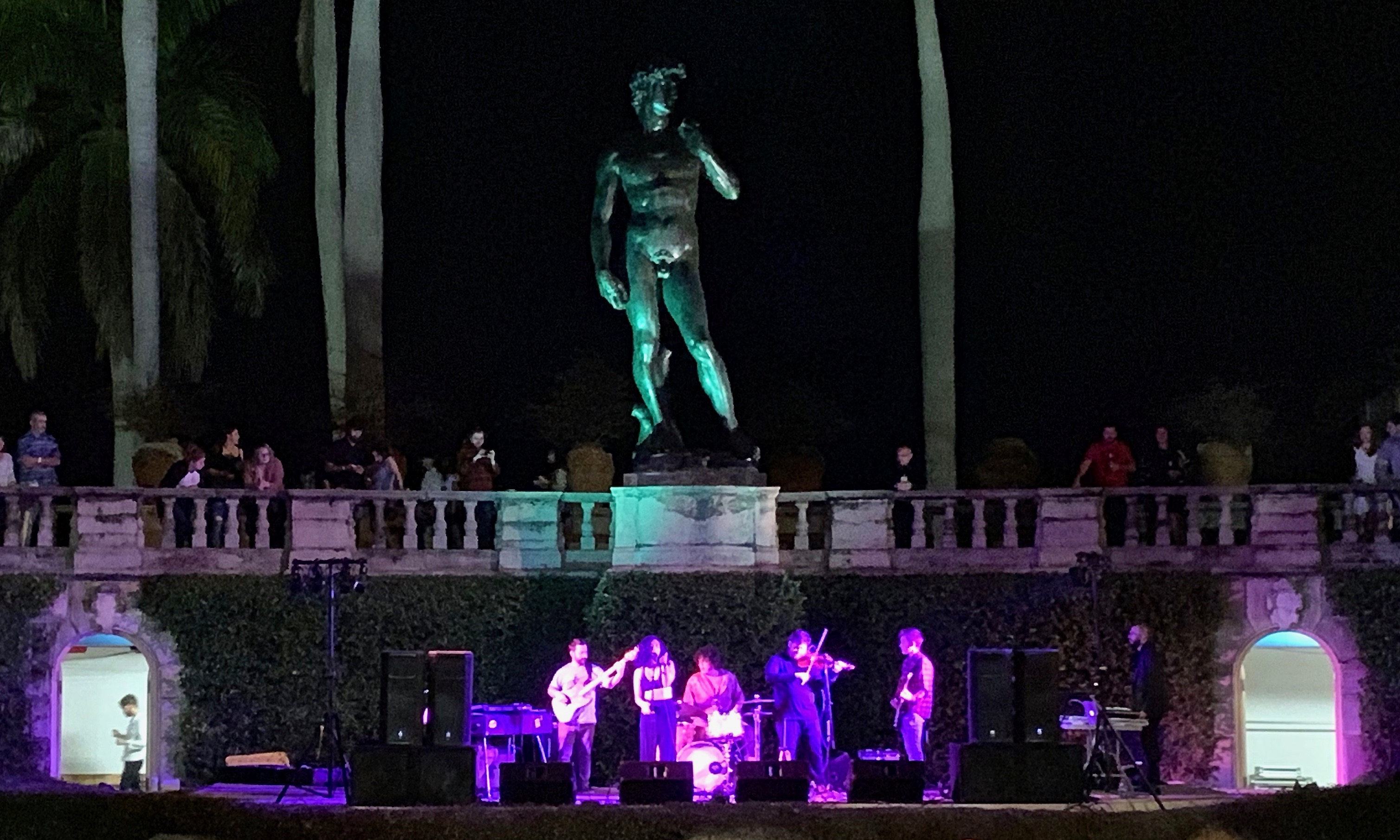 A confusingly temperate February evening marked the beginning of the first Ringling Underground of 2019. Those who awaited the monthly art-centric event entered the sprawling courtyard in droves, and whoever arrived within the first hour was greeted by the music of Lemón Royale. A popular local band, Lemón Royale features young, talented artists whose determination and passion for creating music led them to open the Ringling Underground series on Thursday, Feb. 8. One of the members, vocalist and New College alumna Briana Tyler Lutzi (‘14), expressed the significance of this performance in an interview with the Catalyst.

“This is our first official public show,” Lutzi said. “We had a soft debut at the Gator Club when we first became a band. It wasn’t a paid gig, it was just us saying, ‘Hello world, we’re a band, try and pay attention to us.'”

Lutzi celebrated this debut as a significant progression in her personal aspirations, aside from just the successes of the band. Originally from Miami, Lutzi spent her time studying art and working as a museum curator. However, she felt concerned that the people she interacted with on a daily basis were not being genuine about who they were, so she transferred to New College to continue her studies. While at New College, she met friends who encouraged her to examine how her artistic ambitions were affecting her mental health. Set off on an introspective journey through the pursuit of music, Lutzi discovered a newfound sense of purpose that carried her forward through stagnant months of open mics.

“When you’re working towards something that you’re meant to be doing, feeling hungry doesn’t feel as bad,” Lutzi said. “You don’t need as much food to get full. You don’t need enough sleep to be rested, because you get to wake up and be like, ‘I’ve got this thing and this thing feeds me.'”

About eight months ago, Lutzi was approached by Nick “Gamby” Gambardella, who expressed interest in wanting to collaborate with her. Gambardella introduced his friend and keyboardist John Hetherington, and Lutzi brought in her friend Liam Kaiser, a guitarist she knew from high school. Together the four musicians realized how well they worked together as they started writing and creating music.

“We have over 20 songs that we wrote in a month-long period,” Lutzi said. “The only reason we haven’t written more is because we need to record the ones we have.”

After drawing nouns and adjectives out of a hat during one band meeting, the group came up with the name Lemón Royale. This simple method of letting chance decide reflects on how the group feels about the philosophy of band names.

Lemón Royale worked to broadcast their name by holding small gigs in the Sarasota area, one of which occurred last semester at the Four Winds Cafe. Thesis student Becca Caccavo worked with Lemón Royale to organize the pop-up show. In an email interview, Caccavo lauded the group for their work ethic and overall pleasantness.

“They are definitely easy to work with as a band, and also are individually fantastic musicians who vibe together cohesively and magically,” Caccavo said.

“If we want to have quality live music at New College it’s important to build strong relationships with bands,” Caccavo said. “Beyond that, individuals students should step up and book as many shows as possible!”

Thanks to Lutzi’s connections with Shannon Fortner, who runs the Ringling Underground, Lemón Royale went from pop-up shows to a set underneath a colorfully-lit Michelangelo’s David. The courtyard stage also holds nostalgic value for Lutzi, who was enthralled by bands who played at past Ringling Undergrounds.

“They make it look so freakin’ cool, the stage and the lights and everything, and I’m like, ‘My band’s gonna be up there … my band,’” Lutzi said. “I’m just like a little kid right now.”

Lemón Royale does not want to limit themselves to just this one show; their future plans include finding more events and festivals to connect with people through their music. Lutzi is especially focused on the connection between the band and the fans, saying that monetary support helps, but encouraging words can reaffirm and nourish Lemón Royale’s music-making passion.

Lemón Royale can be found on Instagram and Soundcloud.

Information for this article was gathered from sarasotamagazine.com.