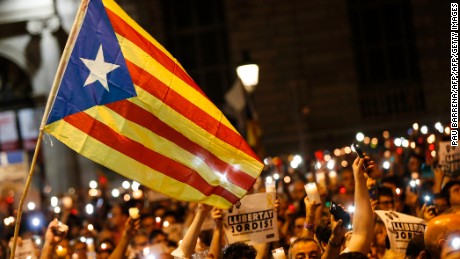 Spain took its largest step yet in opposing the pursued independence of Catalonia as Prime Minister (PM) Mariano Rajoy announced on Oct. 21 that he would remove the leadership of the region and begin a procedure of establishing direct rule by the Spanish central government in Madrid. The actions were quickly condemned by Catalan leaders, whose recent push for independence had garnered global attention after the region held an independence referendum for Catalonia on Oct. 1, despite the Spanish government and courts ruling the vote illegal.

“There’s nothing soft or limited about what he announced today,” political columnist Josep Ramoneda said of PM Rajoy. “We’re entering a very delicate phase, in which an independence movement that appeared to be running out of options might now draw instead on a collective sense of humiliation at seeing Catalonia being forced under Madrid’s control.”

Catalan independence has been a goal for the people of the region for generations, but the move marks the first time that a leader of the Spanish government invoked Article 155 of the Spanish Constitution, a constitutional article meant to protect the “general interests” of Spain as a whole.

Rajoy said that he intends to remove Catalan leader Carles Puigdemont and the remainder of his administration from office, as well as taking charge of Catalonia’s autonomous police force and the Catalan center for telecommunications. The Catalan Parliament will not be dissolved in the move, but the president of the assembly will not be able to take any initiative in anything deemed contrary to Spain’s Constitution for 30 days.

Puigdemont led a mass protest of around 450,000 people in the nation’s capital of Barcelona the same afternoon the announcement was made, with other Catalan leaders warning that the move would only incite further escalation rather than resolve anything. Puigdemont could attempt to circumvent Rajoy’s actions by asking lawmakers to vote on a declaration of independence within the days following the action.