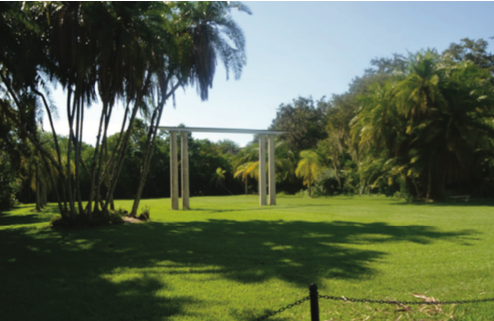 Historic Spanish Point is an interesting park because it looks like a large, Floridian garden. In many ways, that is what it is, but every inch of this place has been documented and there are guides to to tell you all about who has lived here, starting from native Floridians to New York transplants. The park is a conservation area as well as an artifact holding and teaching museum. Visitors can observe foliage and walk the paths along the bay, but they can also come to see structures built by settlers and learn about how their lives were. Historic Spanish Point brings attention to the rich Sarasota history that is all around us.

Historic Spanish Point is a beautiful, environmental site. Even visitors are not interested in a history lesson. Half of the plants there are native to Florida. The picturesque nature of the the park attracts photographers, painters, and also makes it a popular place for weddings and events. The park also host summer camps where children can get hands on experience with anthropology and learn about Floridian history. All while overlooking the Sarasota bay.

Human habitation of the area goes back to Native Americans. Most of the area is built on shell middens. Shell middens are structures that consist of waste from domestic life. This includes animal bones and shells. A lot of the shells came from the food that the inhabitants of the area ate. At Historic Spanish Point, visitors are given the opportunity to go inside a shell midden and be surrounded by the shell midden on all sides.

Muerto is a curator for the Historic Spanish Point Museum’s curator. The title means he is responsible for stewardship.

“This stewardship includes the preservation, protection, maintenance, and documentation of the collection.” Muerto said. “A museum can only exist because of its collection of objects, books, records, photographs, and any other informational media that guides the museum’s mission.”

The curator also has to be knowledgeable on what the park is made up and holds so the questions that of the patrons ask.

From the shell midden, there is evidence for things such as fire, famine and more.

“You can see what happened in the people’s lives,” Muerto said.

Historic Spanish Point, also keeps record of the Webb family, who came from Utica, New York. Visitors can visit the Guptil house, built by the Webbs, Mary’s Chapel and Webbs packing house. Webb was a citrus farmer and had a sorting and packing building on the property.

The second significant owner of Spanish Point was Bertha Palmer. She moved to Sarasota after her husband died. She was a Chicago socialite who took the money she was willed and made her millions into multimillions.

Palmer kept the pioneer buildings intact. She added the gardens such as the Sunken Garden, Duchene Lawn and Jungle Walk, which patrons still enjoy.

The park also has a boat house where people work on boats using historic techniques and tools.

“A great suggestion that I make to anyone who is thinking about visiting the site is to really take advantage of the site and plan an extended trip,” Muerto added.

There are many sites to see at Historic Spanish Point such as, the white cottage, the foliage of the sunken garden, and they even host holiday specific events. And with fall upon us it is perfect place to go on a ghost tour.